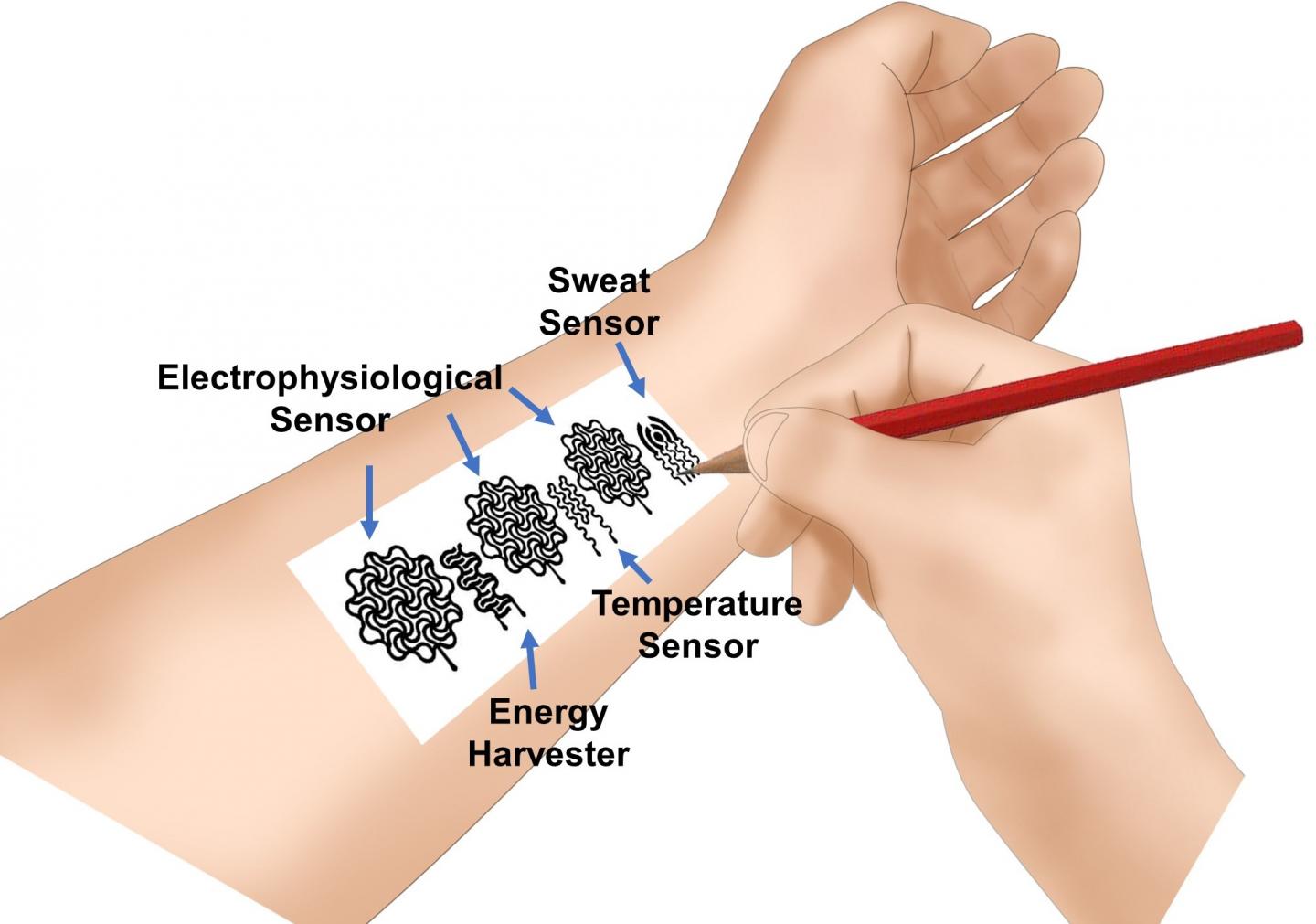 One day, people could monitor their own health conditions by simply picking up a pencil and drawing a bioelectronic device on their skin. In a new study, University of Missouri engineers demonstrated that the simple combination of pencils and paper could be used to create devices that might be used to monitor personal health.

Their findings are published in the journal Proceedings of the National Academy of Sciences.

Zheng Yan, an assistant professor in the College of Engineering, said many existing commercial on-skin biomedical devices often contain two major components — a biomedical tracking component and a surrounding flexible material, such as plastic, to provide a supportive structure for the component to maintain an on-skin connection with a person’s body.

“The conventional approach for developing an on-skin biomedical electronic device is usually complex and often expensive to produce,” he says. “In contrast, our approach is low-cost and very simple. We can make a similar device using widely available pencils and paper.”

Since its invention, pencils — made of lead including various levels of graphite, clay and wax — have often been used for writing and drawing. In the study, the researchers discovered that pencils containing more than 90% graphite are able to conduct a high amount of energy created from the friction between paper and pencil caused by drawing or writing. Specifically, the researchers found pencils with 93% graphite were the best for creating a variety of on-skin bioelectronic devices drawn on commercial office copy paper. Yan says a biocompatible spray-on adhesive could also be applied to the paper to help it stick better to a person’s skin.

The researchers said their discovery could have broad future applications in home-based, personalized health care, education and remote scientific research such as during the COVID-19 pandemic. Yan says the group’s next step would be to further develop and test the use of the biomedical components, including electrophysiological, temperature and biochemical sensors.

“For example, if a person has a sleep issue, we could draw a biomedical device that could help monitor that person’s sleep levels,” he says. “Or in the classroom, a teacher could engage students by incorporating the creation of a wearable device using pencils and paper into a lesson plan. Furthermore, this low-cost, easily customizable approach could allow scientists to conduct research at home, such as during a pandemic.”

An additional benefit to their approach, Yan says, is that paper can decompose in about a week, compared to many commercial devices that contain components that are not easily broken down.