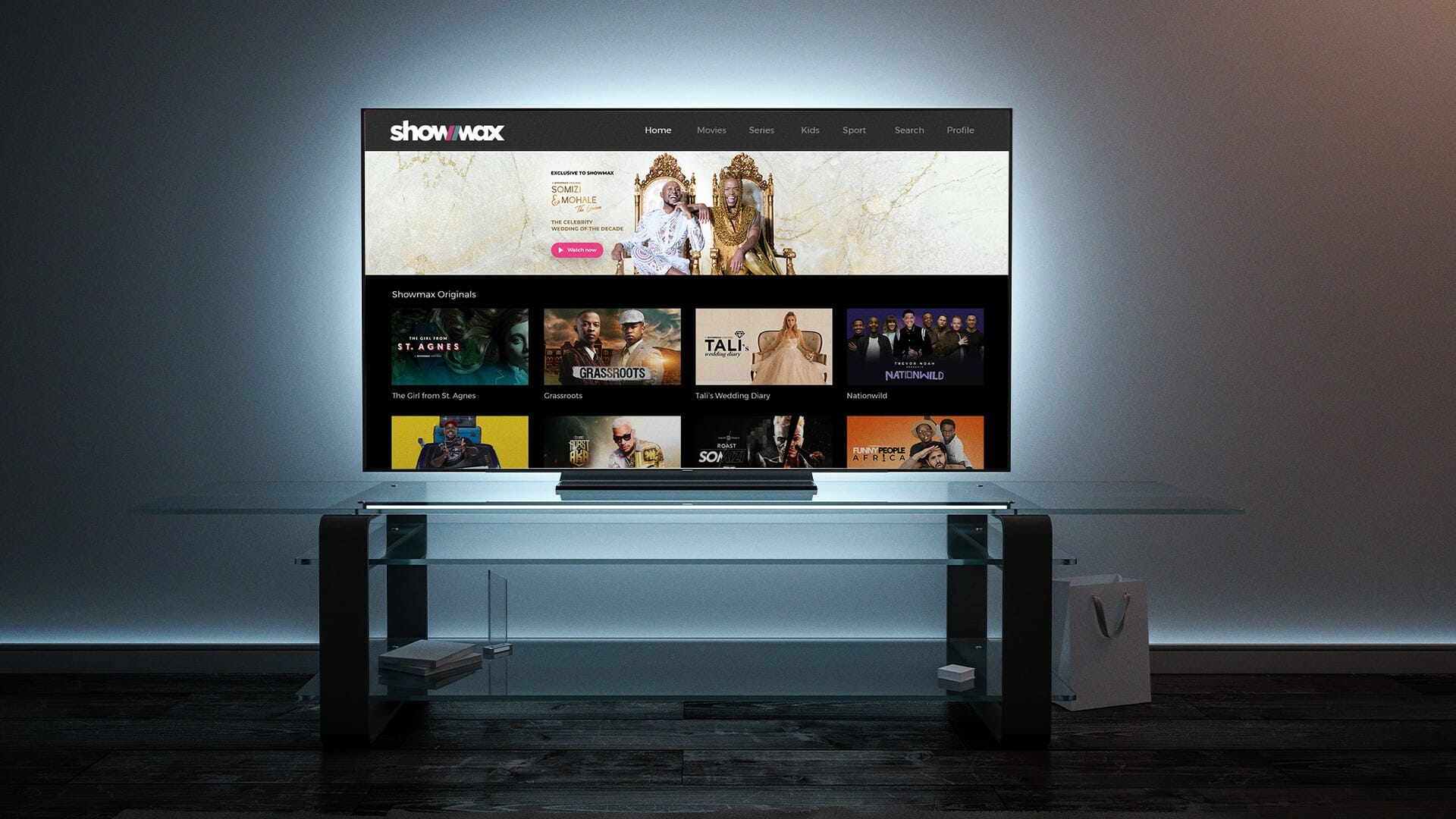 Africa Day commemorates the founding of the Organisation of African Unity, and it’s coming up this Tuesday, 25 May 2021. While pan-African travel remains a distant dream for now, it’s possible to explore our beautiful continent with Showmax’s catalogue of award-winning local content.

Noughts + Crosses was named one of “the 10 best British TV shows of 2020” by Mashable, who called it, “crucially important… a kind of drama/thriller/romance hybrid, mixing Game of Thrones-style political backstabbing with a very human story of discrimination and systemic oppression. The end result? A stunningly crafted epic that’s every bit as tense as it is impactful.”

South African Masali Baduza (Trackers) and BAFTA winner Jack Rowan (Born To Kill, Peaky Blinders) play Sephy and Callum, two star-crossed lovers in the tradition of Romeo and Juliet, in an alternate universe where Africa colonised Europe, rather than the other way round.

Based on Malorie Blackman’s multi-award-winning novel and shot largely in Cape Town with Film Afrika, the series also stars South African actress Bonnie Mbuli (Invictus, Wallander) as Sephy’s mom, Jasmine. Koby Adom – who is from Ghana, was born in Cote d’Ivoire, and grew up in London – is one of the two directors, while South African costume designer Dihantus Engelbrecht earned a Costume Design – Drama nomination from the 2020 Royal Television Society Awards in the UK for his work on the show.

Yvonne Orji: Momma, I Made It! | Nigerian comedy special

In her first HBO comedy special, Nigeria’s Yvonne Orji, better known as Molly from Insecure, has the audience rolling with laughter as she brings her razor-sharp wit and confidence to the stage. Both celebrating and poking fun at her strict, formative Nigerian-American upbringing, Yvonne shares her unique journey from pre-med to comedy, talks about parental pressures to get married, and takes us along to Lagos to meet her family and friends.

In 2020, Yvonne also recently earned her first Emmy nomination and her fourth Black Reel nomination in a row as Molly in Insecure, while Momma, I Made It was nominated for a 2021 Image Award for Outstanding Variety Show (Series or Special).

South Africa’s Thuso Mbedu is making headlines globally right now as the star of The Underground Railroad, an adaptation of Colson Whitehead’s Pulitzer Prize-winning novel, directed by Oscar-winner Barry Jenkins (Moonlight, If Beale Street Could Talk). Even Oprah is a fan, saying on Instagram that, “@thuso.mbedu gives the performance of a lifetime. Great things are coming for her and everyone will be saying her name after watching her as the superhero that is Cora.”

But celebrating Thuso Mbedu is stating the obvious for Mzansi Magic fans, who’ve already seen her earn back-to-back Best Actress nominations at the International Emmy Awards in 2017 and 2018 for her role as Winnie in the isiZulu teen drama Is’thunzi. The show also picked up South African Film and Television Awards (SAFTAs) for Best Actress and Actor for Mbedu and S’Dumo Mtshali (Isibaya, iNumber Number) respectively, not to mention nominations for the all-star cast of Pallance Dladla (DAM, Shadow), Thulane Shange (Uzalo, iNumber Number), and Zikhona Bali (DiepCity).

So, if you’ve been sleeping on Mbedu, rather than wait for her next starring role, opposite Oscar winner Viola Davis (Fences, Ma Rainey’s Black Bottom) in The Woman King, jump into her back catalogue on Showmax, which also includes roles on Isibaya S3 and MTV Shuga: Down South S2.

Wanuri Kahiu’s Rafiki was named Outstanding Film – Limited Release at the 2020 GLAAD Media Awards, which recognise and honour media for their fair, accurate and inclusive representations of the lesbian, gay, bisexual, transgender and queer (LGBTQ) community and the issues that affect their lives. Rafiki beat out the likes of Pedro Almodóvar’s Pain and Glory, nominated for both Oscars and Golden Globes; 2020 Golden Globe and BAFTA nominee Portrait of A Lady On Fire; Sundance audience award winner Brittany Runs a Marathon; and South African favourite Kanarie, starring Schalk Bezuidenhout.

“Good Kenyan girls become good Kenyan wives,” but Kena (Samantha Mugatsia, who won Best Actress at Carthage 2018 and FESPACO 2019 for the role) and Ziki (Sheila Munyiva) long for something more. When love blossoms between them, the two girls are forced to choose between happiness and safety.

Winner of 17 international awards, the Kenyan romance has a 93% critics rating on Rotten Tomatoes.

Winner of 35 awards, Liyana is a genre-defying documentary that tells the story of five children in the Kingdom of Eswatini who, with some guidance from South African storyteller Gcina Mhlope, turn past trauma into an original fable about a girl named Liyana, who embarks on a perilous quest to save her young twin brothers. The film weaves Liyana’s animated journey together with poetic documentary scenes to create an inspiring tale of perseverance and hope.

Liyana is the directorial debut of Swaziland-born and raised Aaron Kopp, with his wife Amanda. Before moving into directing, Aaron shot the Oscar-winning documentary Saving Face and the Oscar-nominated The Hunting Ground.

I Am Not A Witch | Zambian satire

After a minor incident in her village, nine-year-old Shula is exiled to a travelling witch camp where she is told that if she tries to escape she will be transformed into a goat. As she navigates through her new life with her fellow witches and a government official who exploits her innocence for his own gain, she must decide whether to accept her fate or risk the consequences of seeking freedom.

Winner of 15 international awards, including the BAFTA for Best Debut for Zambian-born, Wales-raised director Rungano Nyoni, I Am Not A Witch has a 96% critics rating on Rotten Tomatoes.

Nyoni was inspired by a spate of witch accusations aimed at women, which took place over a particularly dry summer in Zambia, and by her month-long stay at a 200-year-old witch camp in Ghana.

Atang (Zenzo Ngqobe from The River, Tsotsi) returns to a mountain village in Lesotho to bury his father. Expecting to return to the city quickly, he instead befriends an orphan herd-boy, is stirred by memories of his youth, and falls for a childhood friend, Dineo (Nozipho Nkelemba).

The Forgotten Kingdom won 15 international awards, including seven Audience Awards from American festivals, and Best Cinematography, Sound and Child Actor (Lebohang Ntsane) at the Africa Movie Academy Awards, where it earned another six nominations, including Best Film and Best Actor for Nqobe.

The Guardian called The Forgotten Kingdom a “pleasingly cinematic mini epic… combines classic realism with colourful characters, breath-taking vistas and a light dusting of the supernatural” while Radio Times, in their four-star review, praised the film as “heartfelt and touching… so genuine it’s hard to resist.”

Ousmane Sembène’s debut 1966 film, La Noire De… (Black Girl), is the story of a young Senegalese woman who is employed as a governess for a French family in Dakar and moves with them to the Riviera, where her comfortable duties as a nanny in a wealthy household are replaced by the drudgery and indignities of a maid.

Black Girl won the Tanit d’Or at Carthage in 1966, among other prizes, and was hailed by Oscar winner Martin Scorcese (The Irishman) as “an astonishing movie.” It’s at #3 on both the Tarifa-Tangiers African Film Festival’s list of the 10 best African films of all time and The Guardian’s list of The 20 Best African Films, Ranked.

In the 1958 classic Cairo Station, Youssef Chahine both directs and stars as Qinawi, a crippled newspaper vendor who falls for a lemonade seller, Hanouma, who is engaged to another station worker, Abu-Serih. As Abu-Serih tries to unionise the station workers, Qinawi’s fixation on Hanouma crosses the line from innocent crush to dangerous obsession.

Cairo Station screened in competition at Berlin and was included in The Story of Film, the definitive history of cinema, while Chahine went on to receive a Lifetime Achievement Award from Cannes in 1997. The movie has a 100% critics rating on Rotten Tomatoes.

Late Burkina Faso filmmaker Idrissa Ouedraogo – hailed by Variety as “a towering figure of African cinema” – came to international attention in 1989 with Yaaba (Grandmother), the story of two children who make friends with an old woman who has been outcast as a witch by her village.

At Cannes that year, Yaaba shared the FIPRESCI Critics’ Prize with Steven Soderbergh’s Sex, Lies and Videotape and also took a Special Mention from the Ecumenical Jury. Yaaba has an 86% rating on Rotten Tomatoes, with The Los Angeles Times saying, “Yaaba’s power sneaks up on you… Flawless… Told in terms of the greatest elegance and simplicity.”