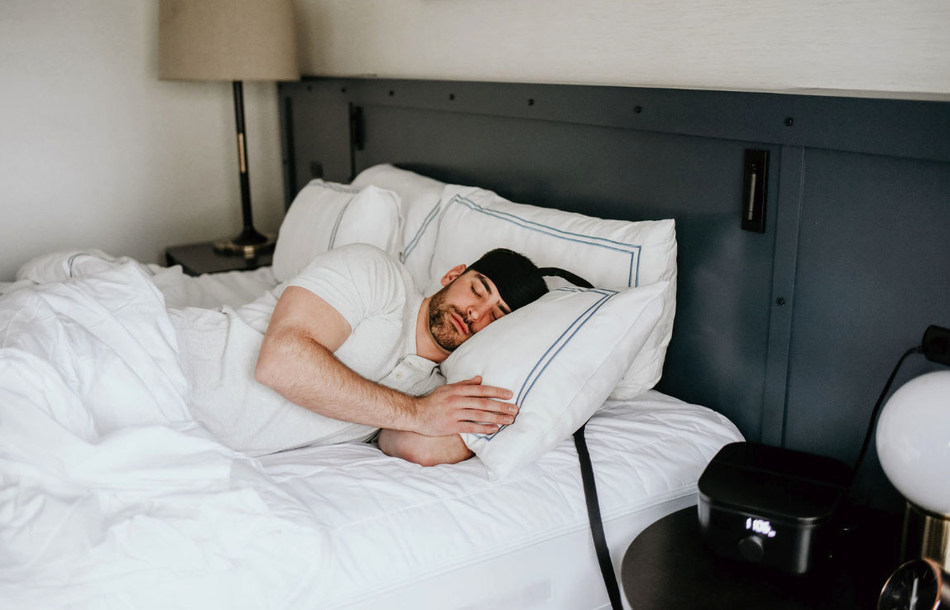 At CES in Las Vegas this week, Sleep tech company Ebb Therapeutics debuted a wearable sleep device with proprietary technology that targets the root cause of sleeplessness: a racing, or overactive, mind.

The tech was developed after Ebb founder and chief medical officer Dr Eric Nofzinger spent 35 years studying the brain mechanisms of healthy sleep. Studies suggested that reduction in metabolic activity in the frontal cortex (the thinking part of the brain) is key to the restorative properties of sleep.

Higher-than-normal brain activity when the body is at rest leads to hyperarousal, which is often associated with clinical complaints of not being able to turn off one’s mind when trying to sleep. While researching this, Nofzinger discovered that when the forehead is cooled, brain activity decreases and the mind can relax. This finding inspired Ebb.

“Sleeplessness is an epidemic. More than ever, people are struggling with being able to ‘turn off’ their minds in order to get to sleep,” says Nofzinger. “Lack of sleep can have a dire effect on one’s ability to function mentally, emotionally and physically, so it is critical that we keep innovating in this space in order to offer safe, drug-free solutions that work.”

Ebb says it’s the first sleep solution that uses precise cooling, called PrecisionCool Technology, to reduce metabolic activity in the frontal cortex. A scientifically-engineered, fluid-filled headband softly wraps around the head and cools the forehead using an intelligent cooling algorithm in order to maintain an optimal temperature range over the course of the night. As brain activity declines, the mind calms and the user is able to fall into a deeper, more restorative sleep.

The device hits the consumer market after several years of research and fundraising. At the end of 2016, the company closed a $38-million Series B round led by KKR & Co. LP. These investments allowed the company to conduct the type of studies and clinical tests needed to get the technology right, and build a first-class team, which includes former executives from Respironics, a leader in sleep and respiratory markets that was acquired by Philips in 2008 for $5 billion.

“At CES, we are introducing technology that is truly first-of-its-kind,” says Ebb Therapeutics CEO Eduard Roosli. “As consumers, finding a solution for any issue concerning health can be both emotional and overwhelming. We are proud to be able to provide a product that is backed by decades of science, has been clinically tested for efficacy, and is completely safe.”
At the show, the startup will also tease another innovation, set to hit the market in late 2020: a second-generation device with similar cooling technology that is battery-powered and portable, for consumers who don’t always sleep in the same place.