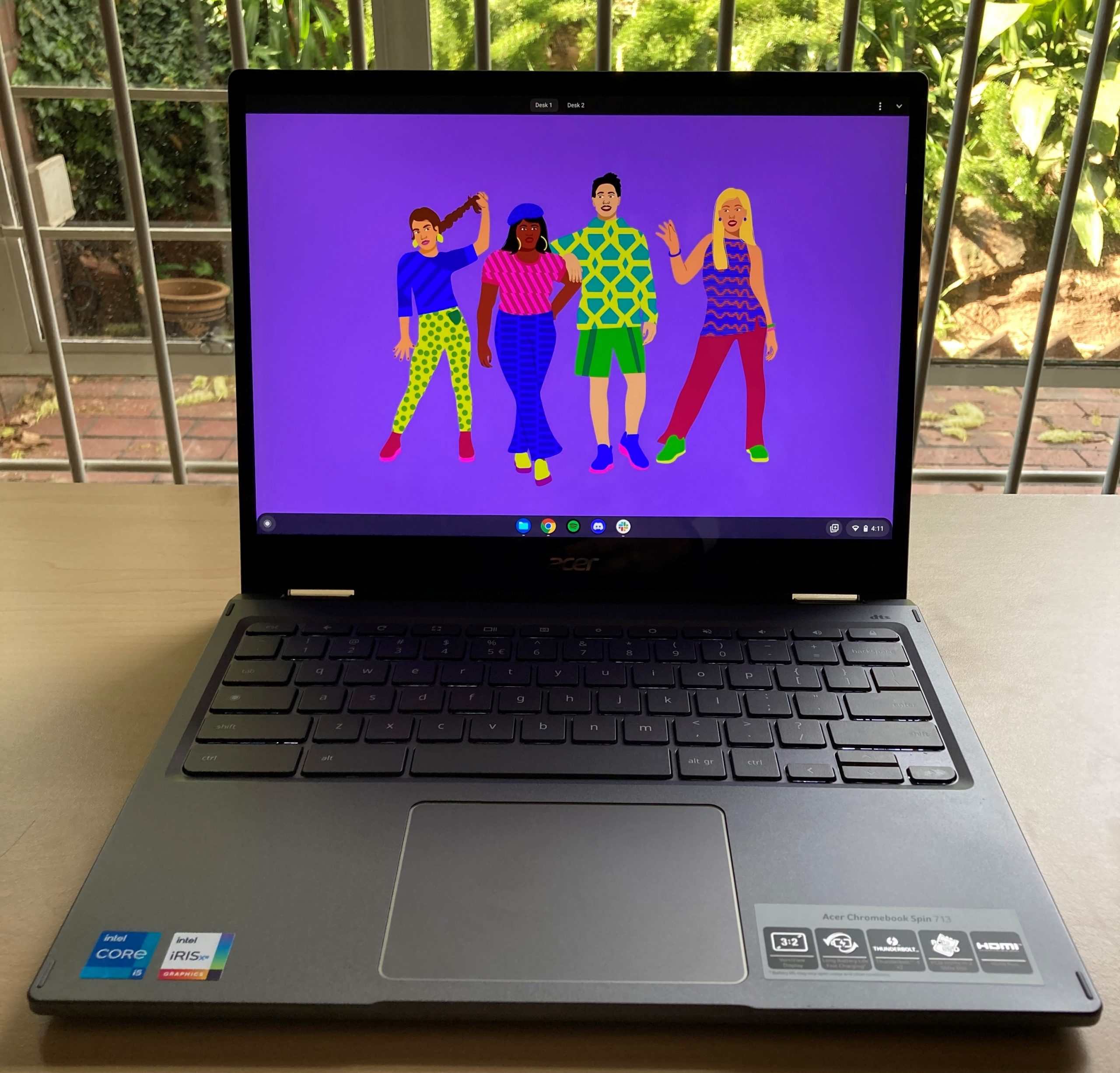 Acer has released a revised 2021 version of its Chromebook Spin 713, which features a longer battery life and two Thunderbolt 4 ports for better accessory connectivity and blazing fast transfer speeds. If you’re in the market for a Chromebook, this is the one you’ve been looking for.

Right off the bat, the look and feel of the device spells premium. From a satisfying deep key travel to its aluminium chassis, the laptop doesn’t break any design conventions – but it doesn’t need to with this high level of build quality. Acer says it is MIL-STD-810G, which means it can survive a 1.2m drop. We didn’t test that claim, but from flexing the body, that sounds right.

When opening up the device, one is greeted with a sizable multi-touch trackpad and large keyboard in a Chromebook-style configuration. The sides of the device reveal a vast array of ports, including two USB-C Thunderbolt 4 ports, a USB-A 3.2 Gen 1 port, a full-sized HDMI port, a headphone jack, and a microSD card slot. Along the right side, there is a thin power button and volume rocker for when the device is folded into tablet mode.

Its form factor is 2-in-1 with a 180°-rotating hinge, allowing the laptop to turn into a tablet. Not just any tablet, though — an Android-based tablet. The Spin 713 comes with Google Play Store support, meaning users can run the same apps they know on their phones, directly from their laptops. This proved to be extremely useful for apps like Gmail, Spotify, and Slack.

ChromeOS has another trick up its sleeve: Linux app support. It has a shell to install Debian packages so, if it runs on Ubuntu, it will run here. We installed Slack for Linux for a more desktop app-like experience when working in laptop mode.

Under the hood, the laptop has 256GB of NVMe PCIe Gen 3 storage, which has theoretical transfer speeds of up to 8GB/s. In real life, it’s a Chromebook, so these speeds translate into snappy performance. It has 8GB of LPDDR4X SDRAM to facilitate the many, many tabs we had open to push this device to its limits. To back all this up, it has an 11th gen Intel Core i5 processor with Iris Xe Graphics, which provides a smooth experience of 4K video playback over the HDMI.

Despite these powerful internal specs, the laptop powered through from 8am to 8pm with around 10% battery remaining at the end of the test. This was performed with typical office tasks in a browser like Google Docs, running the Spotify Android app, and Slack Linux app.

Where this computer really shines bright is its 2K CineCrystal LED display. This gives the screen a high level of text sharpness for text documents and strong colour vibrance for video content. The display being touch screen and software supporting Android apps means it also qualifies as one of the sharpest tablet displays we’ve used in a while. To sweeten the deal, the display’s glass is Corning Gorilla certified.

Above the display is a 720p camera, which fares well in the right light, but can cause a slightly warmer skin tone in lower light conditions. The internal mics are high quality and sound clear on voice calls, which makes this device ideal for remote work, provided one is in a bright room.

Overall, the Acer Chromebook Spin 713 is a great option for those looking for a powerful laptop that will last all day (and then some). The laptop is available from Incredible Connection for R19,000 until 31 October, and for R20,000 from 1 November. Click here for more information.

Age of Empires IV — Out now on PC