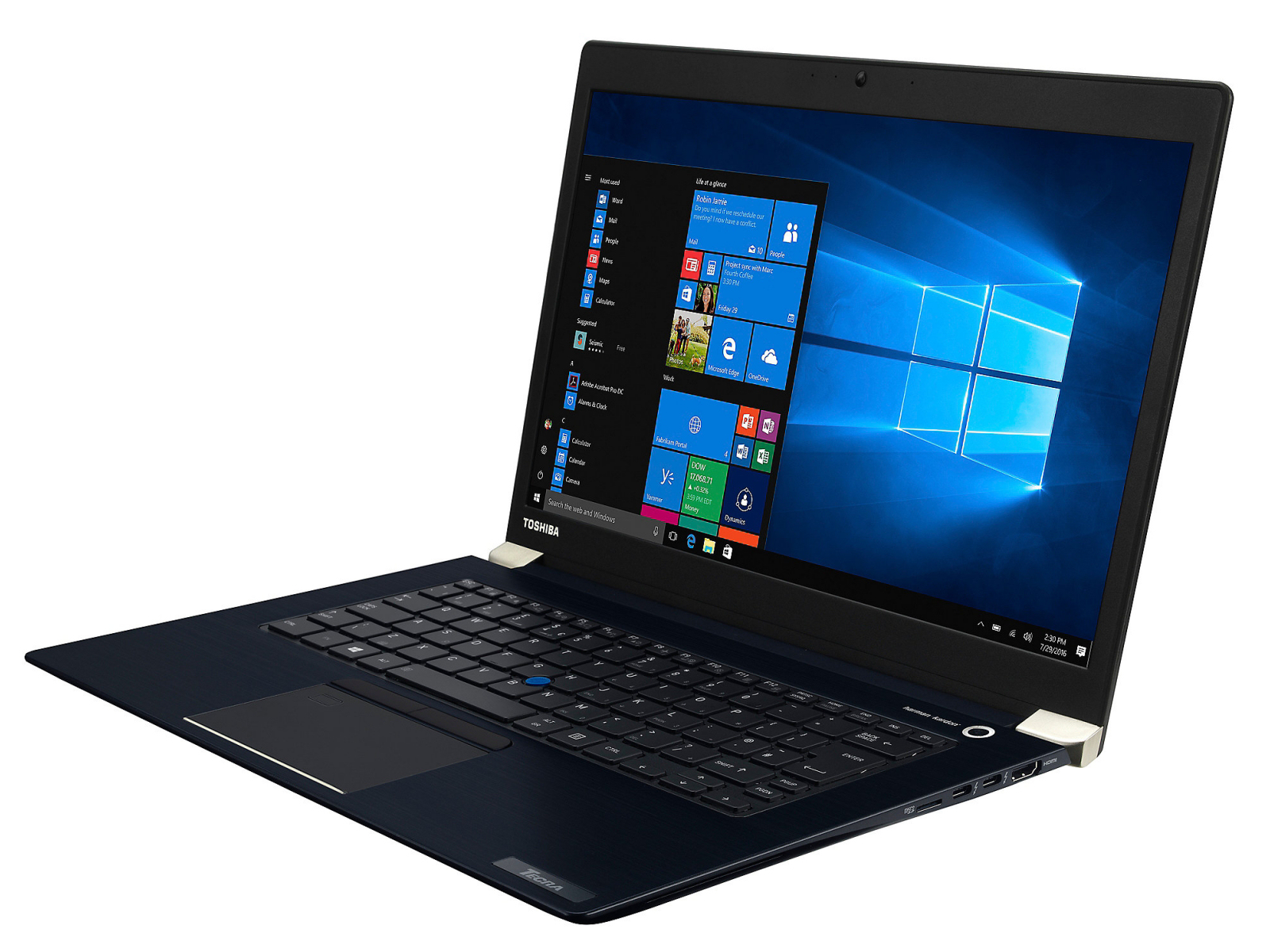 Dynabook, formerly known as Toshiba, has created a laptop to be reckoned with. The Tecra X40-F-147 may be a mouthful to say, but it has the specs to match. Tecra is a line of business laptops that boast high functionality, along with stunning designs. The X40-F features a magnesium alloy chassis, so the laptop remains light as well as MIL-STD-810G.

The rest of the laptop is a brushed black anthracite finish with sharp edges. While Dynabook boasts the formal Military Standard casing on the X40-F, we didn’t drop it. That said, it looks like it could take a few knocks and still operate, thanks to the sturdy build quality. It comes in at 16mm thick, and weighs 1.25kg, making it one of the lighter laptops on the market in the business segment. It features two symmetrical air vents on the back to assist with airflow out the back of the computer.

One of the most astonishing aspects of this computer is the thinness, all with solid cooling mechanisms inside that are geared towards process-intensive workflows, like crunching numbers on data science platforms while having several documents open at the same time.

It houses Intel UHD Graphics 620, which is suitable for multi-user video conferences, streaming video, and light gaming. This, combined with a 14.0” 1,920 x 1,080 touchscreen display, makes it a delight to look at and work with.

The processor is a 4-Core 8th Generation Intel Core i7 CPU (i7-8565U), which provides snappy performance for processor-intensive tasks. We noted a start-up time from shutdown to desktop of 8 seconds. This was made possible by lightning-fast i7 CPU and 512GB solid-state drive in the computer. This also makes it a delight to open and work with programs.

The computer’s sound was superb for listening to music and video conferencing. That’s due to the Harman Kardon sound integrated into the device, which replicates sound excellently, even at high volumes.

For business applications, a keyboard matters the most and that’s where Dynabook has put its focus. The matt black backlit keyboard is a pleasure to type on, and features one of the best typing experiences we’ve ever experienced on a laptop. The backlight option is a huge win for working in darker situations by being able to type in the dark, with a dimly lit keyboard that allows users to see their keys without being distracted by a bright keyboard light.

The trackpad is an absolute dream. It has the right texture, it’s the right size, and it’s mostly in the middle of the computer. It also works flawlessly with the Windows 10 multi-gesture navigations. It also didn’t get oily, which speaks to a careful texture design that makes the computer comfortable to work on after extended periods of time. The trackpad also features a nifty fingerprint sensor, which works very well for fast authentication without the need to type in a password.

Connectivity is also sorted with this laptop, as it features a SIM card slot for 4G/LTE connectivity. Those with a big data plan can have seamless connectivity from Wi-Fi to mobile data in cases where Wi-Fi signal is weak.

The laptop’s battery is 48Wh, which may seem on the low side, but it powered through a 7-hour workday on a single charge. If the brightness is turned all the way up, that changes to around 5 hours.

It is available from under R23 000 in its 512GB SSD + 8GB RAM configuration, putting it on par with other laptops in the space that have less comfortable keyboards and trackpads.