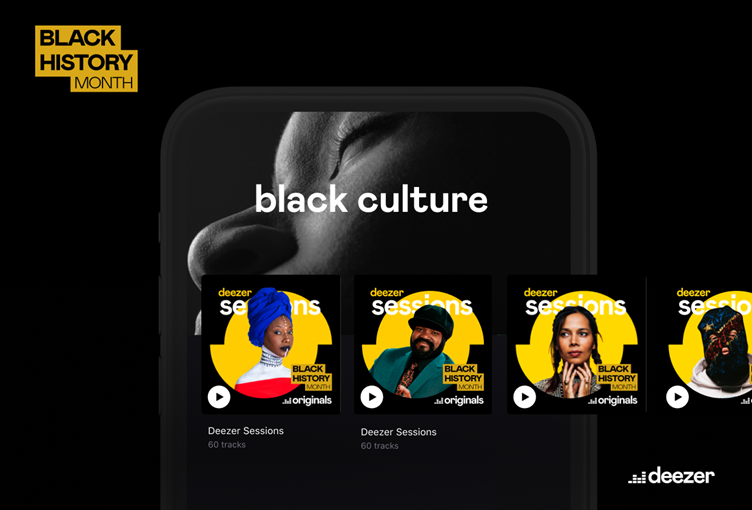 With February being Black History Month, Deezer is celebrating the month by paying tribute to all talented black musicians from all over the world.

The music streaming company has collaborated with artists such as Gregory Porter, Fatoumata Diawara, Rhiannon Giddens, and Kalash Criminel to showcase their talent through new originals sessions. Additionally, 24 playlists have been launched that have been curated by black artists to highlight their music inspirations and the sounds of their home country.

The sessions will be released weekly during the duration of Black History Month and will be found in a special playlist on the permanent and global Black Culture Channel. The channel was launched last year and aims to recognise and support the many talented black musicians and podcasters worldwide.

In the new Originals sessions, each artist performs a live cover version of a song they consider iconic, from their favourite black artist — as well as acoustic covers of their own tracks. The renowned jazz and soul artist Gregory Porter kicked off the series with a cover performance of Sam Cooke’s A Change is Gonna Come. He also treats fans to a new rendition of his own track When Love Was King.

When asked what covering Sam Cooke meant to him, Gregory Porter said: “Even as I sing this song, it connects me to Sam Cooke and his desire for what he was trying to achieve in this song. If you sing with conviction, and sing with a belief in the lyric — that yes I feel this way, that a change is going to come — it’s absolutely optimistic. The song talks about self-doubt, insecurity about love and the outside world. But, the undying optimism comes in the last line. ‘It’s been a long time coming but I know a change is going to come’.”

Later in the month, Fatoumata Diawara will offer fans a stripped-back version of Ben E. King’s “Stand By Me,” while playing the guitar. She will also give a performance of her own track, “Negue Negue”.

Black musicians across many genres, from pop and rap through to soul and classical, have also curated playlists of their favourite songs for Deezer’s Pocket Songs and Midnight Mixtape. The line-up features many world-renowned artists including John Legend, Mr Eazi and Megan Thee Stallion. Black artists from the worldwide dance and EDM scene, like Master KG and Sha Sha, will give fans playlists showcasing the sound of their home country.

“We want to continue giving black artists the attention and respect they deserve,” says Junior Foster, global editor for the Black Culture channel and head of global artist relations. “Our permanent Black Culture channel is not only a space for discovering, but also a place to learn about black creators and influencers around the world that have shaped some of our favourite genres and podcasts. Since our launch last year, we’ve seen a 260% increase in streams of our Black Icons of Rock. We hope that our fans will equally enjoy our Black History Month Collection, as we unite and come together to honour black musicians from the past, present and future,”

Behind the genre will see black artists explaining the history behind their genre of music. Additionally, users will hear personal recommendations on other black artists that are making waves in their genre in the new Recommends series.

Judas and the Black Messiah album out now