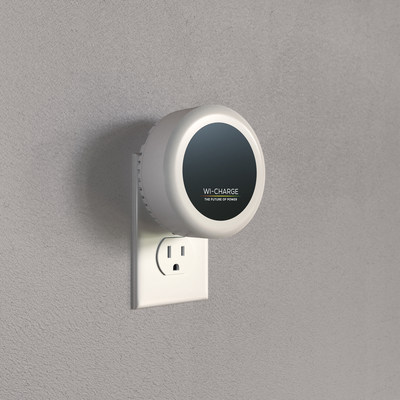 Wi-Charge, a leader in long-range wireless power, has unveiled an ultra-compact long-range wireless charger for smart and IoT devices that powers compatible devices wirelessly from distances up to 30 feet. Built with Wi-Charge’s safe and efficient AirCord technology, the PowerPuck plugs into a wall outlet or screws into a lightbulb socket.

There is a rapid increase in the deployment of smart devices within the home. According to a 2019 Parks Associates report, households with smart devices own an average of six devices, almost double from 2016 levels. The increased number of smart devices means that the endless replacement and recharging of batteries is becoming impractical and is a major concern. According to a 2018 Parks Associates survey, longer battery life is the top desired characteristic for smart home devices. Routing power cables to smart devices, an alternative to using batteries, is often tedious, expensive or forbidden by rental landlords.

PowerPuck’s sleek form factor coupled with its fast and flexible installation eliminates the need for constant battery changes and take away the hassle of running cables to smart devices. Like other Wi-Charge products, the PowerPuck delivers constant power regardless of distance, and is completely safe for consumers.

The PowerPuck is slightly larger than a Nest Thermostat and is very easy to install in a variety of ways. For example, an Edison screw adapter makes it compatible with numerous light fixtures, and a socket adapter allows the PowerPuck to plug directly into a standard wall outlet. Once installed, the PowerPuck automatically locates compatible receivers and initiates power transfer. The receivers can be as small as 0.5 x 0.5 inches and are typically embedded in the charged devices themselves.

Powered by Wi-Charge’s AirCord infrared beam technology, the PowerPuck requires no configuration, calibration or tuning — making it the first plug-and-play wireless power solution for smart devices. PowerPuck can transform a standard home into a highly desirable, wirelessly powered smart home, or help convert a commercial building into a smart building.

“PowerPuck changes how manufacturers create smart and IoT devices and how consumers and businesses use them,” says Yuval Boger, chief marketing officer, Wi-Charge. “Not having to worry about device battery life or power cables means that manufacturers can implement unique features and magical experiences. Additionally, consumers and businesses alike can take advantage of next-generation smart devices to achieve convenience and efficiency.”

Wi-Charge’s patented light-based wireless charging technology gives end-users the freedom they crave and product designers the power they need. It is the only approach that fulfils the three promises of wireless charging:

Visit the Wi-Charge booth #40337 at the Sands Expo to see the PowerPuck in action.