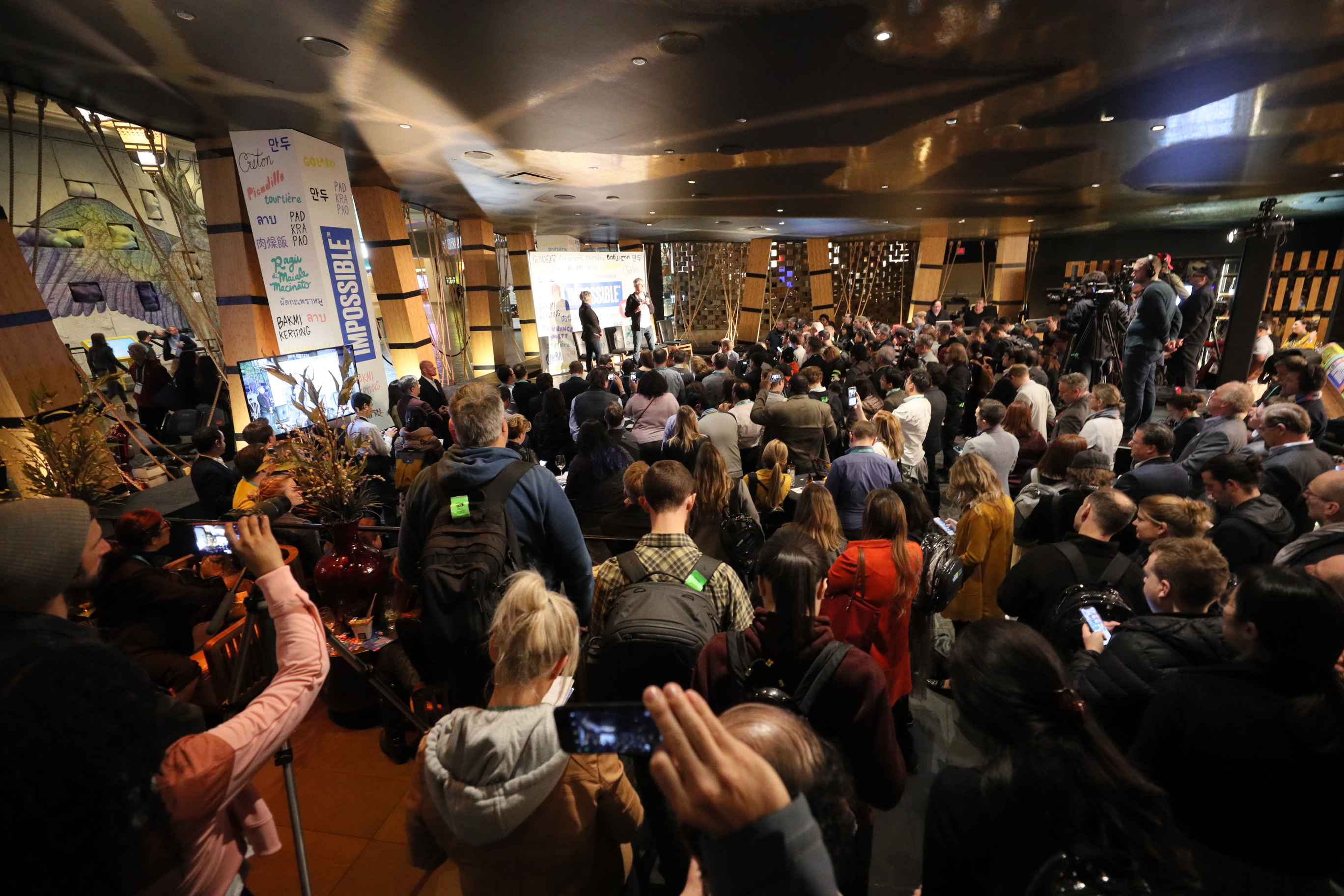 One of the biggest sensations of the annual CES consumer technology trade show in Las Vegas this week was not a gadget, but a menu option. Impossible Foods, which last year became the first food company to exhibit at the tech expo, on Monday evening served up a duo of plant-based “fake meat” products called Impossible Pork and Impossible Sausage.

Impossible Foods joined a wide range of companies launching food and kitchen technologies that promise to transform the way we cook and eat, but the new Impossible products were the only actual food on show.

These joined last year’s CES sensation, Impossible Burger 2.0, which was named by numerous publications as the stand-out product of CES 2019. Its main ingredients are water, soy-protein concentrate, coconut oil, sunflower oil and natural flavouring. It gets the meat flavour from a molecule called heme, found in animal muscle tissue as well as in small quantities in legumes. Impossible Foods scientists found a way to produce it in large volume from plant sources. They have received not only approval from the Food and Drug Administration in the USA, but also kosher and halal certification – arguably far stricter tests.

Last year’s CES generated 300 media articles on Impossible Foods in the first 12 hours of the show, propelling the company to the forefront of the synthetic meat industry. In the next three months, it raised $300-million in venture capital, adding to an existing $450-million investment and valuing the company at $2-billion.

Its major rival, Beyond Meat, maker of the vegan Beyond Burger, went public just a month later. Its initial public offering on the Nasdaq exchange in May gave it a value of $3.8-million on opening day. It eventually topped $15-billion before settling back to its current market capitalisation of $5.1-billion.

Beyond uses a mixture comprising mainly pea protein isolates, rice protein, mung bean protein, canola oil and coconut oil. It has been expanding rapidly across the planet, and this week announced a partnership with McDonald’s to test the product in 52 outlets in Ontario, Canada. The Beyond Meat share price jumped 15% following the news.

Beyond Burgers are becoming widely available in South Africa, with outlets ranging from the “wholesome foods” Voodoo Lily Café in Birdhaven, Johannesburg, to the 50-year-old Thundergun steakhouse in Blackheath, Randburg.

“Beyond Burger is doing very, very well, in South Africa; I can’t sell enough of it,” well-known executive chef Josh Simon, who consults to a range of restaurants on new dishes, told Gadget. He said that both non-meat options and food technology were “sweeping the industry”.

Simon designs dishes for a variety of clients, and says “almost all of them want at least one vegan or vegetarian dish on their menu, and most want more than one. It’s about having a meat replacement for vegetarians and vegans, as well as about sustainability, the greenhouse effect, and animal rights. It’s now common knowledge that eating red meat every day is not good for you and it’s not good for the environment.“

At one of the first restaurants to introduce Beyond Burger, he says, “it did very well from day one”.

“One of the only issues with it is that right now it’s still way more expensive than a beef burger. Vegans will pay for it, because in this country veganism is still a luxury lifestyle, and it hits your pocket a lot harder than in other countries. The Beyond Burger is very expensive so, because of the price point, we’re not yet getting people who are going, ‘Cool. it’s a sustainable alternative to meat and so I’ll order it’.

“But as the industry grows, and more products start to come in and maybe we start to produce more locally, the prices will come down and then people will order a meat alternative burger at a good price as well.”

Beyond Burgers are brought into South Africa by Infinite Foods, a 15-month-old start-up describing itself as “Africa’s plant-based protein products leader. It also imports Miyoko’s Butter, Nature & Moi cheeses, and Oatly milk – all of which are plant-based.

“We have successfully launched the Beyond Burger in over 700 locations nationwide,” says Kevin Coetzee, account manager at Infinite Foods. “Since we started just over a year ago, we have seen the volumes we’re bringing in increase exponentially.

“A number of the locations that stock the burgers also carry the Nature & Moi cheese and, with Miyoko’s arriving imminently, we expect to see a great uptake in the coming weeks. The majority of the customers that keep coming back, are not even the plant-based ones! The main appeal is that the Beyond patty is so familiar to the tastebuds, that the overall experience of eating the burger is nothing short of the real thing.”

It is not only food itself that is being revolutionized by technology. At CES, tech giants like Samsung and LG competed intensively with start-ups for leadership in cutting-edge food-making appliances.

Zimplistic, founded by wife-and-husband team Pranoti Nagarkar and Rishi Israni, demonstrated the Rotimatic, claimed to be “the world’s first automatic flatbread making robot”. It uses artificial intelligence and robotics to automate baking a wide variety of flatbreads, from tortillas to pizza-base.

Nagarkar, co-inventor of the Rotimatic, told Gadget: “Technology is completely changing the business side of food, from alternate sustainable food sources to delivery-enabled cloud kitchens. The food-delivery market alone is estimated to be worth $400-billion to $800-billion by 2030.”

She warned that there were many downsides, “including harsh environmental impact and lack of affordability for most families”.

“This is where robotics holds promise. Redesigned kitchens can allow robots to function seamlessly with little human labour, with a combination of collaborative robots taking over individual aspects of meal preparation. Rotimatic is one major step in this evolution, and we envision other single-purpose robotic innovations shaping the future of kitchens worldwide.”