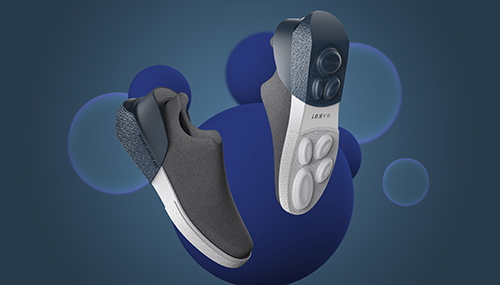 It’s hard to imagine one shoe for many purposes. However, Wahu is claimed to be the first sole in the world to adapt to changes in its external environment and to the dynamic state of the person wearing the shoe. Wahu was created in the Enterprises Factory e-Novia and will be making its debut at CES, the world’s most important event dedicated to launching new consumer technology. it will run in Las Vegas from 7 to 10 January. Wahu has already received a prize announced in the run-up to the event: the Innovation Award in the Wearable Technology category.

By combining design and technology, Wahu allows the structure of the sole to be modified, thus also modifying grip and shock-absorption, to optimise traction control while walking. It does this by using micro-compressors, interconnected cavities, and artificial intelligence which allow the user to activate settings via an app. These settings maximise performance and offer the user maximum comfort in many situations, from indoor surfaces to trails, trekking, and urban surroundings.

The shoe arrives at CES at the moment in which global trends are revolutionising the world of wearables.  This trend is confirmed by the rate of growth in the “active shoes” sector, which by 2023 is predicted to have a turnover of 6.5-billion euros, with North America and Europe leading market share.

The digitalisation of shoes allows innovative services to be created, both for the user and for the brand. Thanks to artificial perception and intelligence being integrated into the shoe, Wahu can, for example, generate a digital signature for the user based on stride, analyse plantar (foot arch) pressure or prevent falls. The prototype will be on show at the e-Novia stand at CES 2020, Las Vegas Convention Center, in South Hall 2, Stand Number 26030

The prototype will be on show at the e-Novia stand at CES 2020, Las Vegas Convention Center, in South Hall 2, Stand Number 26030