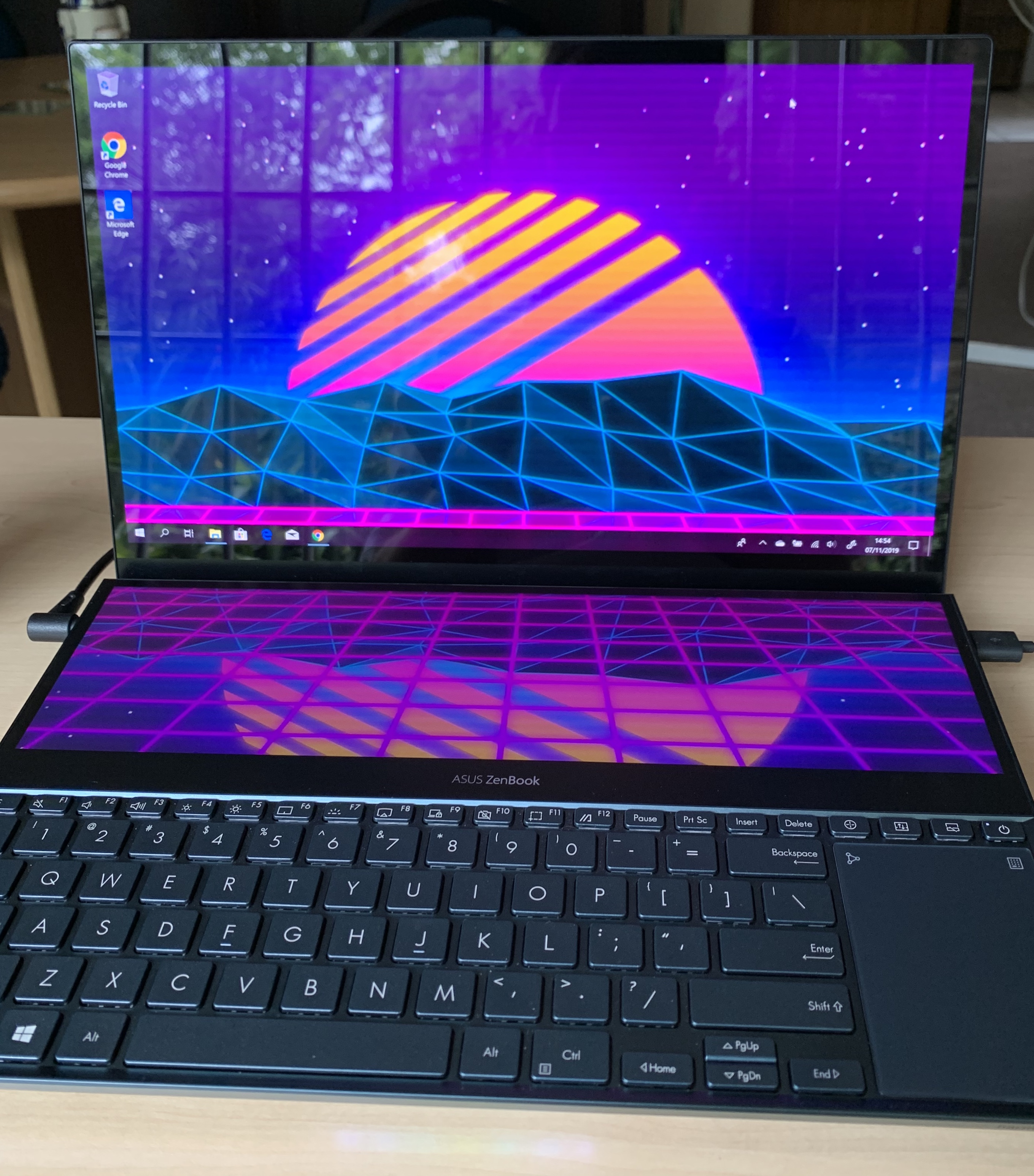 Asus’s strong ZenBook line, aimed at creatives, has added a powerful laptop to the game: the dual-screen ZenBook Pro Duo. This machine shows some of the most thoughtful design on the market, including a new type of dual-screen layout that makes a lot of sense.

When closed it looks like any other laptop and has a concentric circle design etched into aluminium. The laptop feels sturdy on the base as well as the screen, and looks like it could withstand a drop. It’s 24mm thick and weighs around 2.5kg, so it seems pretty thick until one looks at the internals of this machine.

When opening up this computer, we were greeted with a large 15.6” 4K (3840×2160) OLED panel and another 14” (3840 x 1100) 4K UHD display below that, called the ScreenPad Plus. Both screens are touchscreens, 100% DCI-P3, and are brighter than most laptops. As a result, the keyboard and trackpad have been shifted below the second screen. The lowered keyboard takes some getting used to, but is totally worth it for the second display.

The ScreenPad Plus comes with a set of its own apps, including Spotify, handwriting mode, and a few other quick settings. It comes with a stylus called the Asus Pen, which allows for 1024 pressure levels and rejects one’s palm, making it very useful for apps like Adobe Illustrator. The top screen supports that pen too, but writing feels far more natural on the ScreenPad Plus.

An ErgoLift hinge raises the computer up at an angle, to make the lowered keyboard more comfortable to type on, as well as aid the cooling system. It’s at a small 4.5 degrees tilt with this hinge that makes a huge difference in typing comfort.

On the left side, a USB-A port, a regular size HDMI 2.0 port and a proprietary charging jack. On the right side, it features a USB-A 3.1 port, Thunderbolt 3, and a 3.5mm audio jack. Both sides feature air outlet ports.

We tested Rise of the Tomb Raider at 1080p, with the RTX 2060, and set the game to its highest preset graphics settings. The game’s frame counter was used. It hovered between 70 and 75 frames per second (fps) with 10 minutes of gameplay, which is really good compared to most desktop computers.

The processor is a 6-Core 9th Generation Intel Core i7 CPU (i7-9750H), which provides snappy performance. We noted a start-up time from shutdown to desktop around 7 seconds. This was made possible by a combination of the fast processor and solid-state drive in the computer. This also makes opening programmes lightning fast.

Now for the trackpad. The off-centre trackpad placement feels a bit weird, even though we know why it’s placed that way. We found ourselves using an external mouse and using it in a very handy NumPad mode. The trackpad is extremely precise otherwise.

The laptop’s battery is 71 Wh, which may seem large, but it needs to power two big screens and heavy processors. As a result, it’s difficult to get more than 6 hours of productivity out of the machine. We played Rise of the Tomb Raider with both screens on for about 1 hour before we needed to charge it.

It will be available for about R48,000 (depending on when one buys it) in the Intel Core i7, 512GB SSD, and 16GB RAM configuration, putting it up there with the high-performance laptops in terms of price.