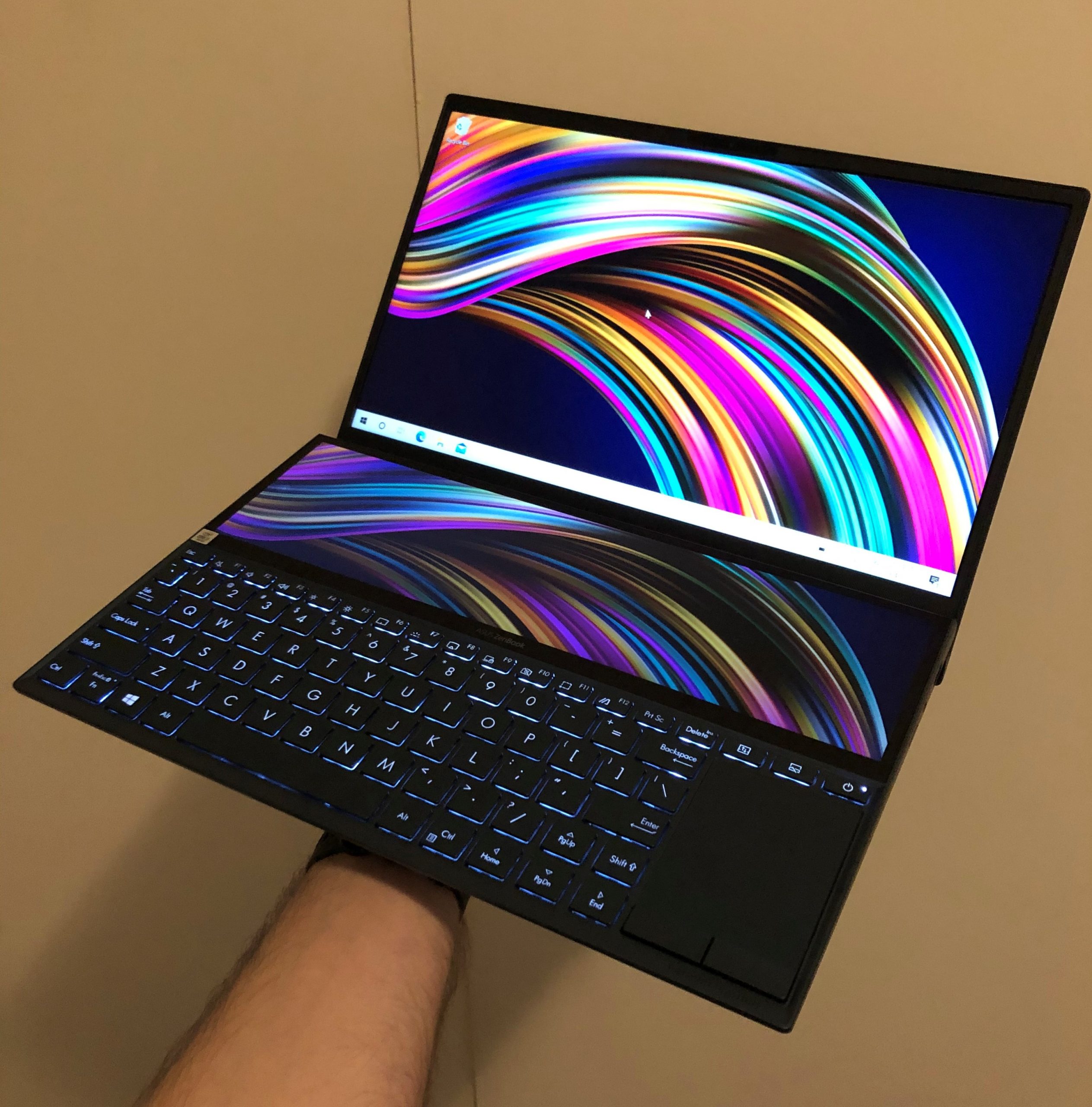 Last year, we got our hands on the Asus ZenBook Pro Duo, which came in a 15.6” form factor. it was a powerhouse for productivity, with an iconic dual-screen design. The smaller 14” sibling, the ZenBook Duo, pushes a similar design in a smaller, more portable form-factor.

Out the box, the Zenbook Duo comes with the same aluminium-etched concentric circle design as the Pro Duo, but features a slimmer 19.9mm thickness. Our review unit also came with a brown leather envelope pouch, which would keep the device scratch-free while still looking good.

When opened, the ZenBook Duo’s keyboard and ScreenPad deck are propped up using a hinge connected to the screen, just above where a normal laptop hinge would be connected. This hinge, called the ErgoLift, is great at making the low-set keyboard easier to type on and serves an important role in keeping the computer at its maximum performance capabilities, keeping it cool by allowing more air to flow below the computer.

Looking down at the keyboard deck, it is half keyboard and trackpad on the bottom and half screen at the top. The keyboard takes some getting used to, because it sits right at the bottom left corner of the deck, while the trackpad is placed directly right of the keyboard on the bottom right. The portrait-style trackpad does feel a little squashed and we mostly used a mouse for the review. That’s not to say the trackpad is bad in a pinch, it’s just not ergonomically viable to spend 10 hours working on it.

On the right side of the device, there is a USB 3.1 Gen 1 port, an audio jack, and a MicroSD card reader, while the left side of the device hosts two USB 3.1 Gen 2 ports (one is USB-A and the other is USB-C), an HDMI in, and a proprietary DC-in jack. Other connectivity includes a Wi-Fi 6 ready 802.11ax card and Bluetooth 5.0 chipsets.

The main screen is a 14” Pantone-validated screen at a resolution of 1920×1080. It makes content look great and the colour accuracy makes this an ideal choice for content creators, like graphic designers and video editors.

The overall design is ideal for those who have gotten used to a two-screen desktop set up, and want to continue this multi-tasking when they’re away from the office. This second screen, called the ScreenPad Plus, is a 12.6” touchscreen (at a resolution of 1920×515) that sits above the keyboard deck and can be used for a range of functions. During our review, we used it for notes during full-screen Zoom meetings, for transcribing videos, and signing documents with the touchscreen. Some apps are optimised for the second screen, which makes it natural to tap on the screen between keystrokes.

One of the most useful features of the two-screen setup in a laptop form factor was using an app that has several panels. For example, the Davinci Resolve video editor could have its colour grading panels below the main video on the main panel to expand the detail of the video to the whole screen. These benefits apply to apps like Photoshop, OBS Studio, Visual Studio Code, among many other apps that benefit from a dual-screen setup.

Speaking of processor-intensive apps, the ZenBook Duo can handle pretty much any heavy graphics and business application thrown at it. This is because it houses a 10th-gen Intel Core i7 processor with an Nvidia GeForce MX250 graphics processor, which made video editing and gaming streaming a breeze.

While this isn’t quite a gaming computer, it wouldn’t be a current Gadget review without testing Rise of the Tomb Raider. For this test, the optimal settings were on low with FXAA turned on and it scored an average of 38 frames per second (fps). It was nice to see the consistency of frames per second, which barely fluctuated and contributed to an overall better experience.

The Duo shines in video editing, where it exported an 8-minute 1080p 60fps project in DaVinci Resolve project in 9 minutes and 45 seconds. This fast exporting of high-framerate HD video speaks volumes about the creative capabilities this computer can provide.

The 70Wh battery is larger than what you’d usually find in other 14” laptops, but this computer does need to power two screens. A hotkey can disable the second screen and this bumps the performance up to 12 hours of office and media usage in Better Battery mode. When the ScreenPad Plus is permanently on, one can expect around 9 hours of battery.

Overall, the ergonomics take some adapting to, but the benefit of the second screen is just too good to not get this device if one is used to two-screen workflows. The Asus ZenBook Duo (UX481) is available from Evetech for R30 000.

Huawei refreshes its buds
Now, computers can predict – and picture – your thoughts