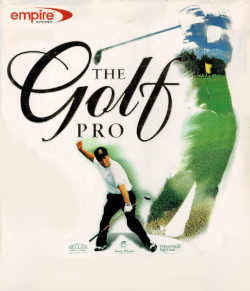 It’s not often that South Africa plays a significant role in an international computer game, but The Golf Pro even goes as far as including a local kid in the sub-title. Not that you’d call Gary Player a kid, but then what is he doing endorsing something called a Mouse Drive?

That is the supposedly revolutionary new trend in golfing games. Instead of basing your swings on a meter, which gives you an indication of when to begin a swing, you swing the mouse itself. Sound difficult? Well, let’s go to the Gadget Four-Question user Test:

Yes, set-up is as quick as loading a CD and clicking a few buttons.

No and Yes. No, not when you first move from traditional meter swinging to mouse swinging. As the makers acknowledge, it’s simple in principle: “The golf shot is controlled by the movement of the mouse. Move the mouse back, and the on-screen golfer takes a backswing. Move it forward and the golfer hits through the ball.” Nothing could be simpler? Once you get used to it – after a few hours play, perhaps – Yes. You probably couldn’t go back to the old way.

3. Does it operate as advertised?

Let’s start by saying this isn’t the first golf game to use a mouse. SimGolf called it the MouseSwing; Front Page Sports: Golf called it the TrueSwing. So much is made of this gimmick, that any assessment of the game must revolve around it.

So here’s the first problem: when the sun pours in through the window onto my mouse mat, or when I leave a window open and dust gets into the mouse, the mouse becomes sluggish, and The Golf Pro becomes as usable as Windows Terminal. Of course, that’s no fault of the game, but a little more fault tolerance would help those of us who don’t use our PCs in a clinical environment.

Secondly, and this is perhaps a plus rather than a minus, moving the mouse side to side also has a significant effect on a swing, and this takes far more getting used to than the backward and forward motion the makers suggest is all you need to make. The consequence, however, is greater complexity, and thus a more interesting game.

You get to start at Beginner level and work your way up through Amateur to Pro. At the same time, you can choose between three types of major gameplay: stroke play, match play and Stableford, and you can play each in multiplayer modes.

No game nowadays is complete without modem support, and even The Golf Pro is succumbing to it – but not yet. While it supports serial, modem and network links to allow matches between four players at a time, Internet support requires the Linked Play Upgrade, which is not yet available. Bearing in mind that this is a MouseDrive and not a golf club, gameplay is satisfyingly realistic.

If you’re a beginner and want to get a handle on the basics before making a fool of yourself in front of your business contacts on a real golf course, Gary Player is on hand to teach you – in simulation and on video – how to go that extra yard. Finally, the game is a little disappointing in terms of graphical treatment.

Computerised golf has long set a standard in graphic treatment – all those green expanses lend themselves to the screen – but this one doesn’t take the concept any further. View angles, depth of scenery, rendering of new scenes as you move about – all of these fall down behind the emphasis on the mouse. In this age of virtual reality games, the PC golfer will no doubt have seen other games on screen, and will wonder why this one pays so little attention to the visual needs of the modern computerised lifestyle.

It must be said, at the same time, that the live commentary is fun, and the golf courses themselves look magnificent.

Yes, for the serious computer golfer, $44,95 (around R299 in South Africa, depending on outlet) is a bargain for a fresh experience. And no, action gamers should keep away.