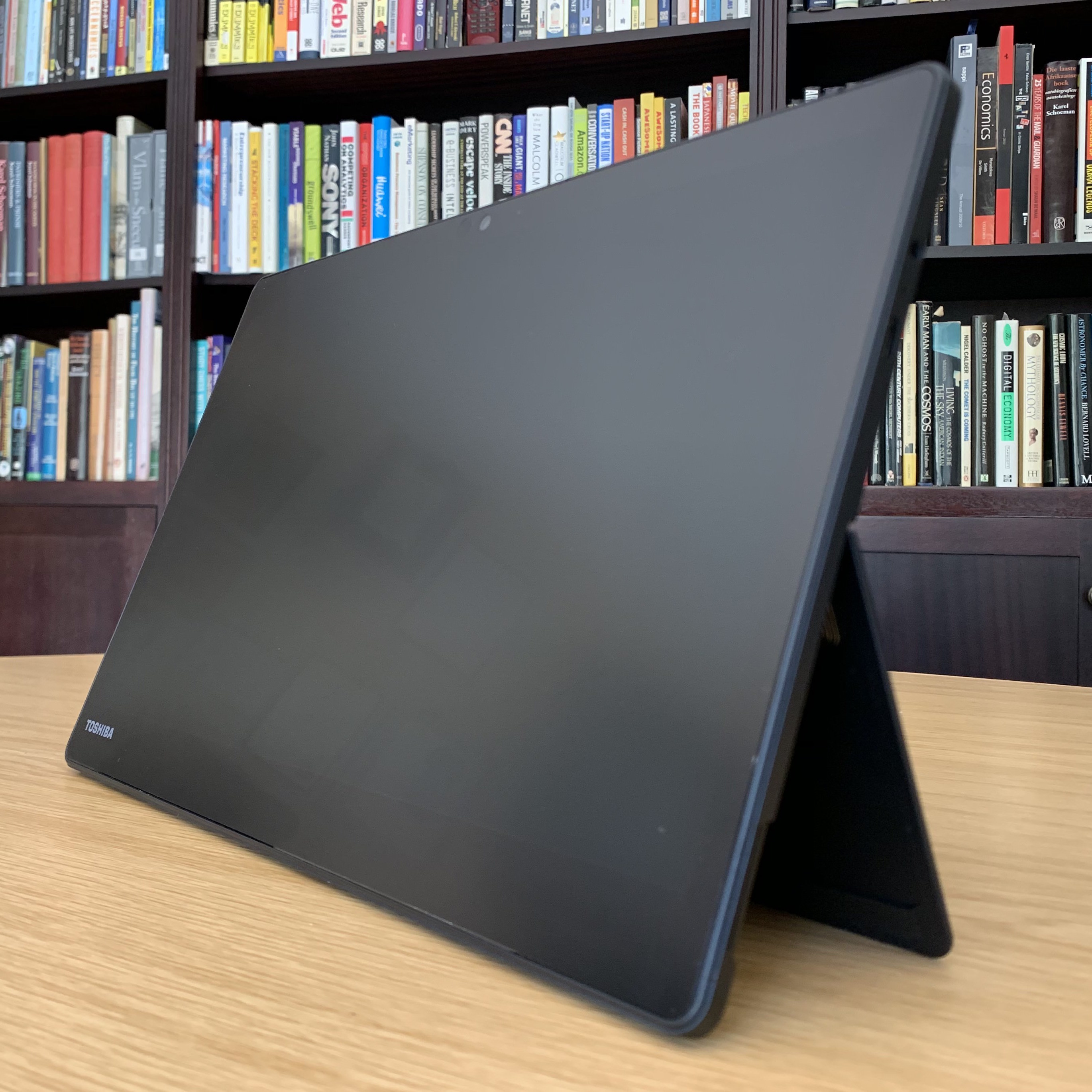 While 2-in-1 laptops have become a mature technology on the market, they haven’t become less clunky or cumbersome to use. Until now.

Dynabook – previously Toshiba – has released the Portégé X30T-E, which is aimed at the business market and offers impressive processing power for a mid-sized form factor. Best of all, it acts as a 2-in-1 should.

The unit we reviewed housed an Intel Core i7-8550U, an Intel UHD Graphics 620 GPU, and a whopping 1TB SSD. All of this was housed behind the screen, which is extremely thin when one considers the power that sits behind it.

On the left side, the panel has a SIM card slot, volume rocker, and power button, while on the right it features a USB Type-C port for charging or connectivity, and a 3.5 mm headphone jack. On the back is a small indented square, which houses the fingerprint sensor. On the front, the wide-bezelled 13.3-inch display has a matte finish to make working in brighter, sunlit conditions more comfortable. The wide bezels ensure that accidental touches don’t happen when one is holding the computer in tablet mode.

Apart from the panel, we had two keyboards and a stylus in the box.

The first keyboard is an answer to the minimalist connectivity on the panel. It features two USB ports, an ethernet port, a VGA port, an HDMI port, and a Kensington lock. When attached, this keyboard makes the computer seem like a standard-sized Core-i7 laptop. The keyboard also has an integrated battery to extend the battery life.

The second keyboard is a slimmer, lighter version with no ports. This is ideal for those who want a slimmer profile on-the-go while writing or doing basic tasks. When using the computer with this keyboard, one needs to use the tablet’s built-in kickstand for support. The kickstand does not need to be used with the other keyboard.

Both keyboards are backlit and have a deep key travel for a satisfying typing experience. The trackpads are fairly standard and serve their purpose. For a good 2-in-1 experience that’s comparable to Microsoft’s Surface Pro, the computer came preloaded with Windows 10 Pro.

During the setup, the touch features were responsive and one could work seamlessly between touching the screen and using the trackpad. The touch technology in the display is powered by Wacom, leaders in tablet-input technology, which also enables the accurate stylus technology in the screen.

The overall design of this computer shows Dynabook’s meticulous attention to detail. The cooling fans face upward to cool the heavy-duty CPU, while the serious keyboard has metal pins and hooks to eliminate the need for a kickstand. This is a great first step for the legacy of Dynabook.

We didn’t test games on the computer, because it doesn’t have a dedicated GPU. That said, it performs well in multitasking situations and handles Photoshop well.

The point where it shines is note-taking in tablet mode. In Microsoft OneNote, the tablet can distinguish between the stylus and one’s finger. That allows one to move the virtual page around with one hand and write with the other, while resting one’s palm on the screen with no accidental input. The pen can also sense pressure changes, creating a very natural feel to writing on the screen.

The integrated 36 Wh battery is on the small side but is complimented by another 36 Wh in the keyboard for a 9-hour battery life.

Overall, this is the best alternative to the Microsoft Surface Pro, especially in terms of availability in South Africa.