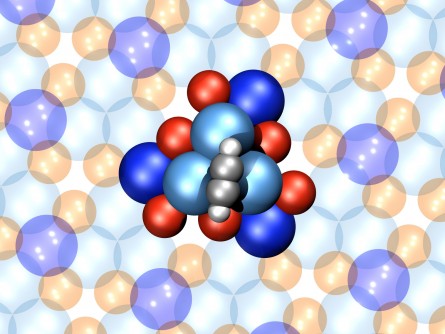 The smallest motor in the world – consisting of just 16 atoms: this was developed by a team of researchers from Empa and EPFL. “This brings us close to the ultimate size limit for molecular motors,” says Oliver Gröning, head of the Functional Surfaces Research Group at Empa. The motor measures less than one nanometer – in other words it is around 100,000 times smaller than the diameter of a human hair.

In principle, a molecular machine functions in a similar way to its counterpart in the macro world: it converts energy into a directed movement. Such molecular motors also exist in nature – for example in the form of myosins. Myosins are motor proteins that play an important role in living organisms in the contraction of muscles and the transport of other molecules between cells.

Energy harvesting on the nanoscale

Like a large-scale motor, the 16 atom motor consists of a stator and a rotor, i.e. a fixed and a moving part. The rotor rotates on the surface of the stator (see picture). It can take up six different positions.

“For a motor to actually do useful work, it is essential that the stator allows the rotor to move in only one direction,” says Gröning.

Since the energy that drives the motor can come from a random direction, the motor itself must determine the direction of rotation using a ratcheting scheme. However, the atom motor operates opposite of what happens with a ratchet in the macroscopic world with its asymmetrically serrated gear wheel: While the pawl on a ratchet moves up the flat edge and locks in the direction of the steep edge, the atomic variant requires less energy to move up the steep edge of the gear wheel than it does at the flat edge. The movement in the usual ‘blocking direction’ is therefore preferred and the movement in ‘running direction’ much less likely.  So the movement is virtually only possible in one direction.

The researchers have implemented this “reverse” ratchet principle in a minimal variant by using a stator with a basically triangular structure consisting of six palladium and six gallium atoms. The trick here is that this structure is rotationally symmetrical, but not mirror-symmetrical.

As a result, the rotor (a symmetrical acetylene molecule) consisting of only four atoms can rotate continuously, although the clockwise and counterclockwise rotation must be different.

“The motor therefore has 99% directional stability, which distinguishes it from other similar molecular motors,” says Gröning.

In this way, the molecular motor opens up a way for energy harvesting at the atomic level.

The tiny motor can be powered by both thermal and electrical energy. The thermal energy provokes that the directional rotary motion of the motor changes into rotations in random directions – at room temperature, for example, the rotor rotates back and forth completely randomly at several million revolutions per second. In contrast, electrical energy generated by an electron scanning microscope, from the tip of which a small current flows into the motors, can cause directional rotations. The energy of a single electron is sufficient to make the rotors continue to rotate by just a sixth of a revolution. The higher the amount of energy supplied, the higher the frequency of movement – but at the same time, the more likely the rotor is to move in a random direction, since too much energy can overcome the pawl in the “wrong” direction.

According to the laws of classical physics, there is a minimum amount of energy required to set the rotor in motion against the resistance of the chute; if the supplied electrical or thermal energy is not sufficient, the rotor would have to stop. Surprisingly, the researchers were able to observe an independently constant rotation frequency in one direction even below this limit – at temperatures below 17 Kelvin (-256° Celsius) or an applied voltage of less than 30 millivolts.

From classical physics to the quantum world

At this point we are at the transition from classical physics to a more puzzling field: quantum physics. According to its rules, particles can “tunnel” – that is, the rotor can overcome the chute even if its kinetic energy is insufficient in the classical sense. This tunnel motion normally occurs without any loss of energy. Theoretically, therefore, both directions of rotation should be equally likely in this area. But surprisingly, the motor still turns in the same direction with 99% probability.

“The second law of thermodynamics states that entropy in a closed system can never decrease. In other words: if no energy is lost in the tunneling event, the direction of the motor should be purely random. The fact that the motor still rotates almost exclusively in one direction therefore indicates that energy is also lost during tunnel movement,” says Gröning.

Which way is time running?

If we open the scope a little more: When we watch a video, we can usually tell clearly whether time is running forward or backward in the video. If we watch a tennis ball, for example, which jumps a little higher after each impact on the ground, we intuitively know that the video runs backwards. This is because experience teaches us that the ball loses some energy with each impact and should therefore bounce back less high.

If we now think of an ideal system in which neither energy is added nor lost, it becomes impossible to determine in which direction time is running. Such a system could be an “ideal” tennis ball that bounces back at exactly the same height after each impact. So, it would be impossible to determine whether we are watching a video of this ideal ball forward or backward – both directions are equally plausible. If the energy remains in one system, we would no longer be able to determine the direction of time.

But this principle can also be reversed: If we observe a process in a system that makes it clear in which direction time is running, the system must lose energy or, more precisely, dissipate energy – for example through friction.

Back to the mini-motor: It is usually assumed that no friction is generated during tunneling. At the same time, however, no energy is supplied to the system. So how can it be that the rotor always turns in the same direction? The second law of thermodynamics does not allow any exceptions – the only explanation is that there is a loss of energy during tunneling, even if it is extremely small.

“The motor could enable us to study the processes and reasons for energy dissipation in quantum tunneling processes,” says the Empa researcher.