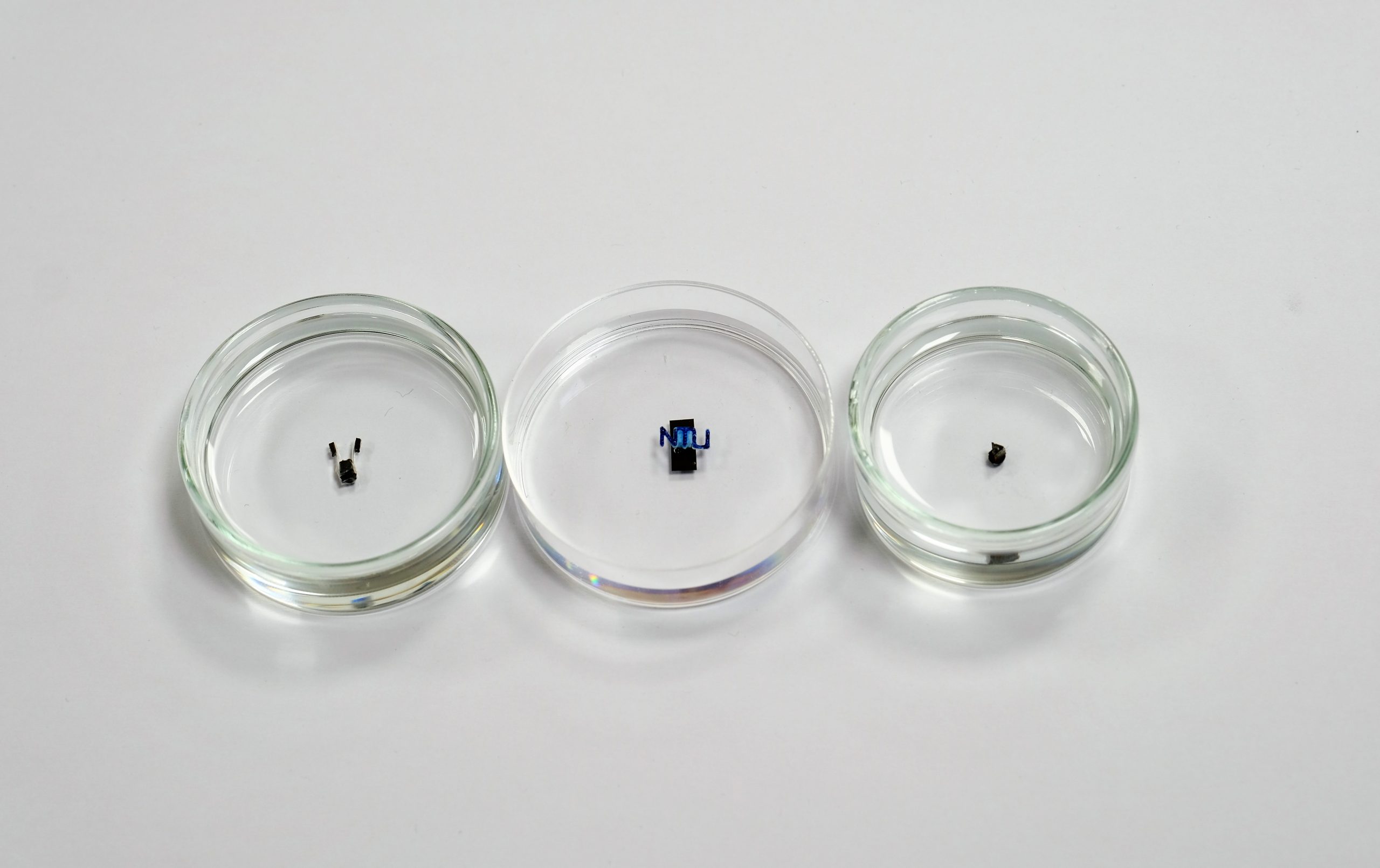 The NTU millimetre-sized robots measure about the size of a grain of rice and can be controlled using magnetic fields.

A team of scientists at Nanyang Technological University, Singapore (NTU Singapore) has developed millimetre-sized robots that can be controlled using magnetic fields to perform highly manoeuvrable and dexterous manipulations. This could pave the way to possible future applications in biomedicine and manufacturing.

The research team created the miniature robots by embedding magnetic microparticles into biocompatible polymers — non-toxic materials that are harmless to humans. The robots are ‘programmed’ to execute their desired functionalities when magnetic fields are applied.

The made-in-NTU robots improve on many existing small-scale robots by optimizing their ability to move in six degrees-of-freedom (DoF) – that is, translational movement along the three spatial axes, and rotational movement about those three axes, commonly known as roll, pitch and yaw angles.

While researchers have previously created six DoF miniature robots, the new NTU miniature robots can rotate 43 times faster than them in the critical sixth DoF when their orientation is precisely controlled. They can also be made with ‘soft’ materials and thus can replicate important mechanical qualities — one type can ‘swim’ like a jellyfish, and another has a gripping ability that can precisely pick and place miniature objects.

The research by the NTU team was published in the peer-reviewed scientific journal Advanced Materials in May 2021 and is featured as the front cover of the June 10 issue.

Lead author of the study, assistant professor Lum Guo Zhan from the School of Mechanical and Aerospace Engineering said the crucial factor that led to the team’s achievement lie in the discovery of the ‘elusive’ third and final principal vector of these magnetic fields, which is critical for controlling such machines.

By contrast, previous works had only defined the applied magnetic fields in terms of two principal vectors.

“My team sought to uncover the fundamental working principles of miniature robots that have six-DoF motions through this work. By fully understanding the physics of these miniature robots, we are now able to accurately control their motions.  Furthermore, our proposed fabrication method can magnetise these robots to produce 51 to 297 folds larger six-DoF torques than other existing devices. Our findings are therefore pivotal, and they represent a significant advancement for small-scale robotic technologies,” explains Asst Prof Lum.

Measuring about the size of a grain of rice, the miniature robots may be used to reach confined and enclosed spaces currently inaccessible to existing robots, say the NTU team, making them particularly useful in the field of medicine.

The movements of the robots can be controlled remotely by an operator, using a programme running on a control computer that precisely varies the strength and direction of magnetic fields generated by an electromagnetic coil system.

The miniature robots may also inspire novel surgical procedures for ‘difficult-to-reach’ vital organs such as the brain in future, the NTU team said, adding that much more work and testing still need to be accomplished before the miniature robots can eventually be deployed for their targeted medical applications.

Co-authors of the research, PhD students Xu Changyu and Yang Zilin from the School of Mechanical and Aerospace Engineering said, “Besides surgery, our robots may also be of value in biomedical applications such as assembling lab-on-chip devices that can be used for clinical diagnostics by integrating several laboratory processes on a single chip.”

In lab experiments, the research team demonstrated the dexterity and speed of the miniature robots.

Using a jellyfish inspired robot, the NTU team showed how it was able to swim speedily through a tight opening in a barrier when suspended in water. This demonstration was highly significant as it suggested that these robots were able to negotiate barriers in dynamic and uncertain environments and this could be a highly desirable ability for their targeted biomedical applications in future such as in surgical procedures for ‘difficult-to-reach’ vital organs such as the brain.

With their gripper robot, the scientists were able to assemble a 3D structure consisting of a bar sitting atop two Y-shaped stilts in less than five minutes, about 20 times faster than existing miniature robots have been able to. This proof-of-concept demonstration, say the researchers, suggests that one day they may be used in ‘micro factories’ that build microscale devices.

Providing an independent view, Professor Huajian Gao, a university professor from the School of MAE at NTU, and a recipient of the 2021 American Society of Mechanical Engineers Timoshenko Medal, say, “This is a perfect example of how engineering ingenuity rooted in deep scientific understanding helps us develop advanced robotics for the benefit of mankind. This research work can have a profound impact in many fields ranging from novel surgical methods to small scale assembly processes in future manufacturing.”

The NTU team is now looking to make their robots even smaller, on the scale of a few hundred micrometres, and to ultimately make the robots fully autonomous in terms of control.