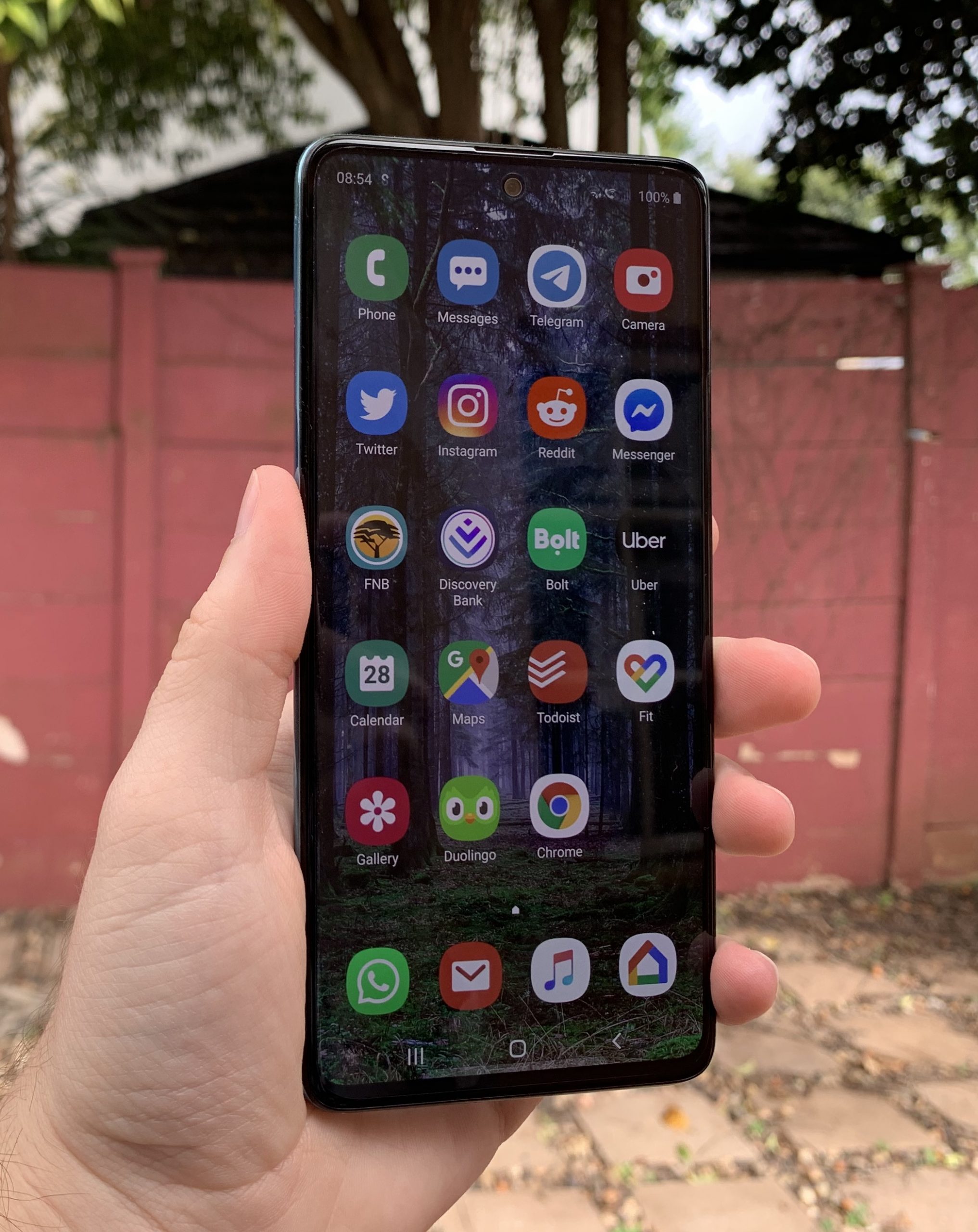 It’s not often one can look at a mid-range phone and mistake it for a flagship. That’s what you can expect to experience when taking the Galaxy A51 out into the open.

Samsung went back to the drawing board with its new range of devices, and it shows. The latest Galaxy A range features some of the highest quality, budget-friendly devices we’ve seen so far. The Samsung Galaxy A51 is one of the best phones we’ve seen in a while, not just aesthetically, but in what it packs into a sub-R7000 price tag.

Looking at the device briefly, it’s very easy to mistake it for a flagship. It features a four-camera array on the back, and an Infinity-O punch-hole display – both of which are features of the high-end Samsung devices. In fact, it features a similar camera array as the Galaxy Note10 Lite but features an additional lens in the array. The cameras line up in an L-shape, clearly avoiding looking like a stovetop.

Apart from the camera array, the back of the handset features a striking pattern called Prism Crush, a pattern of pastel shades that come in black, white, blue, and pink. For the review, we used the Prism Crush Blue colour and it looks really great. The feel is clearly plastic, which isn’t too surprising for a mid-range device, but the design is definitely something that will make users opt for a clear case. It’s also great to see a design pattern that deviates from the standard single iridescent colours many manufacturers have copied from Huawei’s design.

Along the sides, it features a metal-like frame, but again, it’s plastic. On the left side, we find a SIM and microSD card tray while the right side houses the power button and volume rocker. The bottom of the phone features a very welcome USB Type-C port and a 3.5mm headphone jack, which isn’t too uncommon for mid-range phones.

On the front, the device is pretty much all screen, at an 87.4% screen-to-body ratio, thanks to a tiny chin at the bottom and the small punch hole for the camera. The earpiece has also been hidden inside the frame in attempts to maximise this screen-to-body ratio. When powered on, the 6.5-inch display looks vivid and sharp. That’s because Samsung opted to put a Super AMOLED display into this midrange unit, giving it a resolution of 1080 x 2400 (at 405 ppi) in a 20:9 format. This makes the display FullHD+, and perfect for consuming video content like Netflix and YouTube in HD.

Hidden underneath the display is an in-screen fingerprint sensor, which is very surprising to find in a mid-range device. While it is extremely accurate, it takes some getting used to because the sensor is so large that one needs to put one’s entire finger over the right part of the display to unlock it. Most other types of non-in-screen fingerprint sensors don’t mind a partial fingerprint. The display itself feels nothing like the back and that’s because it’s not plastic, but rather Gorilla Glass 3, to prevent the screen from shattering easily.

What’s interesting about this device is finding accessories which aren’t quite available in phone stores yet. When browsing online for screen protectors, one has to be on the lookout for screen protectors that are compatible with the in-screen fingerprint sensor. Make sure to check out the reviews of users before purchasing them.

In terms of software, Samsung has made a great deal of effort to make the experience slick. Gone are the days of TouchWiz (thank goodness) and now we have OneUI in its second version. OneUI makes the phone easier to use by putting most of the interaction on the bottom half of the screen and most of the view on the top part of the screen, where one’s thumbs don’t usually reach.

Out of the box, the device came with Android 10. This is a huge step forward in terms of commitment to running the latest software for major feature updates as well as for Android security patches to keep the device secure.

It also has most of the cool features from the flagship devices, like Samsung Pay, Bixby, and Link to Windows. Samsung Pay is an absolute pleasure to use, even if it still confuses the person taking your payments. From linking my cards, I have stopped taking my wallet out with me because all merchants that accept tap-to-pay will accept Samsung Pay on the A51.

Bixby is useful if you’re in the Samsung app ecosystem, especially for owners of SmartThings devices like Samsung TVs and SmartThings-enabled smart home devices. Otherwise, Google Assistant is still accessible for those who still want to use the standard Google experience.

Link to Windows is an interesting feature that started with the Galaxy Note10 and has since trickled down into the mid-range. It allows users to send SMS messages, view recently taken photos, and receive notifications from the phone, all on a Windows 10 PC. This can be enabled by going to the Your Phone app found in the start menu.

The rear camera is phenomenal for a mid-range device and features a 48MP wide sensor. The photos come out as 12MP images, which is a common trick of many manufacturers to achieve high-quality photography. It does this by combining 4 pixels into a single superpixel to get the best colours out of the picture, while still remaining sharp. It also performs surprisingly well in low light, which is not something we were expecting from a mid-range device.

The 12MP ultra-wide angle lens spans 123-degrees, which is very wide and also useful for getting shots in where one can’t move back further. It’s not as great as the main lens but does the trick for getting everyone in for a group photo in a galley kitchen.

The 5MP depth-sensing lens supplements the portrait mode, which adds a blur effect to the background of the photo – the same lens as its predecessor, the Galaxy A50. It features a 32MP wide-angle selfie camera, which is perfect for fitting everyone into a large group selfie.

For storage, it comes in a 128GB model on Samsung’s website, which seems to be the standard size. This is extremely welcome in the mid-range segment and is the largest we’ve seen for internal storage capacity as a starting point.

At a recommended selling price of R6,999, the Samsung Galaxy A51 marks the beginning of a great era for Samsung, because it provides a feature-rich handset at an affordable price.