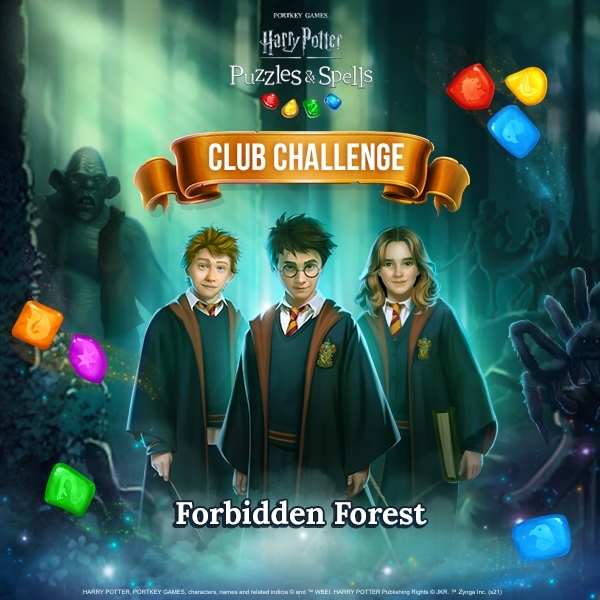 Unlocking at player level 55, the club challenge introduces a new, separate interactive path to the game’s solo journey, offering independent points, rewards and ‘lives’ system in each of its events. Spanning up to three weeks at a time, each club challenge event will transport players to an interactive map location, marked with puzzles to tackle to continue their progress. Earning points for each puzzle they complete, players will receive three daily ‘lives’ specific to the club challenge feature within Harry Potter: Puzzles & Spells. As clubmates collaborate to navigate the maze-like map, they will encounter both pitfalls and rewards as they earn points and work together to contribute to their club’s league ranking.

For the inaugural club challenge event, players will leave the safety of Hogwarts and enter the mysterious, and often dangerous, Forbidden Forest. As clubmates explore the mythical forest, they’ll uncover rare but revered Artefacts from the wizarding world, like the coveted House Cup or the Sword of Gryffindor, to gain access to the final puzzle. In the final showdown, players must team up to defeat some of the most ferocious creatures found in the forest, including the Mountain Troll and Hungarian Horntail, or Ron’s most loathsome foe, Aragog.

“With elements of social collaboration, strategy, and magical gameplay complete with iconic spells and Chocolate Frogs, Harry Potter: Puzzles & Spells offers a robust Match-3 experience unlike any other,” says Yaron Leyvand, executive vice president of games at Zynga. “The Club Challenge event introduces a blend of excitement, mystery and friendship that is core to the Harry Potter series and allows players to connect and collaborate with Clubmates in more meaningful ways.”

Harry Potter: Puzzles & Spells is playable for iOS and Android devices worldwide, as well as on Amazon Kindle and Facebook. For more information, visit the game’s website at www.harrypotterpuzzlesandspells.com.