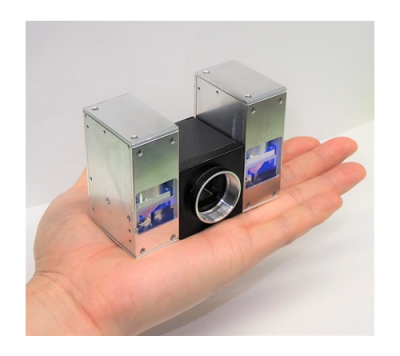 Toshiba Corporation has revealed major advances in shrinking the laser projector unit of its Light Detection and Ranging (LiDAR) system, to one quarter the size of the previous version released in June 2021. Using two of the new projector units, the new LiDAR is just 206 cubic centimetres in volume and can fit comfortably in the palm of the hand. Its range has been pushed out to 300m, the world’s longest, with an industry-leading image resolution of 1200×84 pixels. It can be configured with flexible combinations of projector units to handle a variety of long-range and wide-angle detection applications.

The new LiDAR is expected to advance progress in Toshiba’s focus application areas, namely autonomous driving and infrastructure monitoring, and also opens the way to exploring partnerships in other areas, including robotics, drones, and small security devices.

Toshiba initiated LiDAR research to advance autonomous driving and infrastructure resiliency. In addition to extending the range, with a wider viewing angle and better resolution, it had to make the LiDAR even smaller. However, there has long been a trade-off in LiDAR range and size against the requirement of an eye-safe laser. Akihide Sai, senior research scientist at Toshiba’s Corporate Research & Development Center behind the new LiDAR, says: “To extend the range of a laser emitted by a single projector, you have to increase its intensity. If you do that, you also have to increase its emission width, to avoid a beam that focuses on a small spot and is strong enough to impair eyesight. The problem is, a wider emission requires a larger projector.”

Toshiba’s solution is a LiDAR that can use multiple small projector units, the laser beam source. They all emit an eye-safe beam in the same direction, which increases the effective range. This approach also keeps down LiDAR’s overall size.

In field tests, Toshiba confirmed that a LiDAR with two of the new projectors has a range of 300m, 1.5 times further than its previous prototype with a single projector. In very bright sunlight conditions, 100,000 lux, the two-projector LiDAR also showed much more detail in the scanned image than its predecessor.

The flexibility gained by combining multiple projectors, and fine-tuning control of the emitted laser, opens the way to customising the LiDAR for long-range and wide-angle scanning. This will extend use to areas such as automatic guided vehicles, which must combine wide-angle views with long-range route monitoring.

Sai and his colleagues are building on current achievements for future advances: “We are continuing research work that will advance our LiDAR technology, including solid-state LiDAR, toward boosting range and resolution, and making the LiDAR even smaller. We aim to commercialise LiDAR for autonomous driving and infrastructure monitoring in fiscal year 2023, and look forward to exploring new applications in robots, drones, and security devices.”

Continue Reading
You may also like...
Related Topics:product of the day, Toshiba