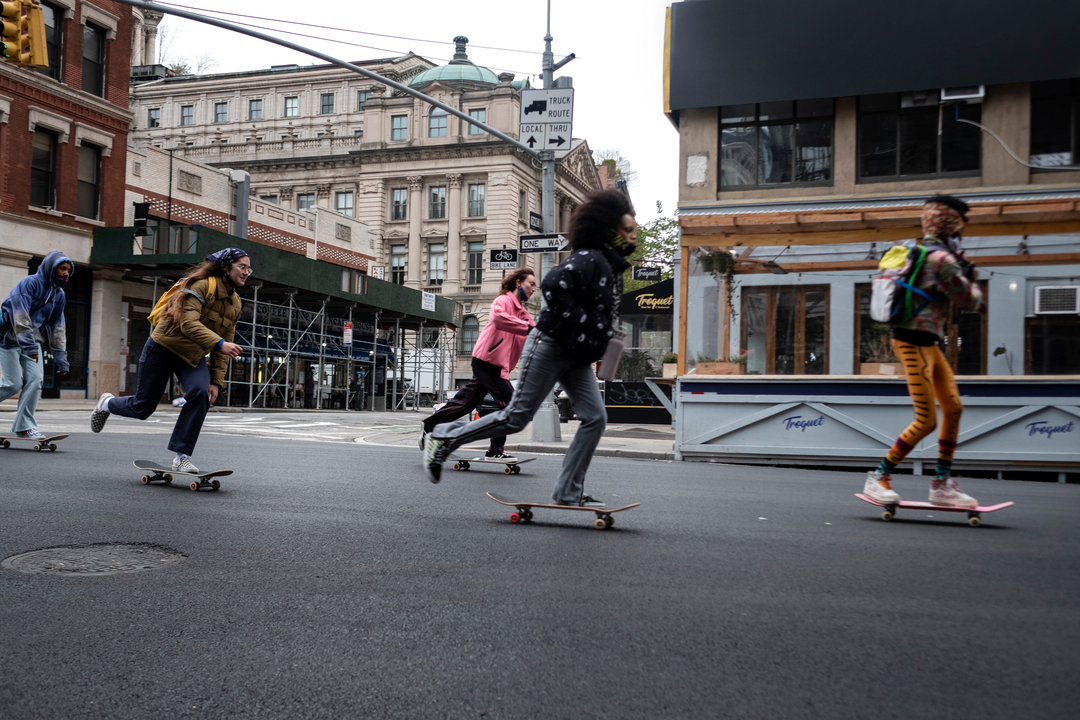 Written, executive produced and directed by Crystal Moselle (the filmmaker behind the Sundance Grand Jury Prize-winning documentary The Wolfpack), Betty is based on her critically acclaimed feature film, Skate Kitchen, which took the skateboarding scene – and the festival circuit – by storm in 2018.

“Betty is about a group of women stepping into a world that’s very intimidating and making it their own,” says Crystal. “Skateboarding is the backdrop but really it’s about relationships and women supporting each other. It’s scrappy, beautiful and filled with love.”

The critics agree. Betty has a 98% critics’ rating on Rotten Tomatoes, where Season 1 was the fourth best-reviewed young adult series of 2020. As the critics’ consensus there puts it: “Earnest, audacious, and effortlessly cool, Betty captures the spirit of skating and friendship with style.”

Set in the last chapter of 2020, Season 2 captures the late summer and early autumn COVID-19 months in New York City, where masks and outside activities are the norm.

Nominated for a 2021 Gotham Award for Shortform Breakthrough Series, the show’s acclaim is a testament to both Crystal’s intimate filmmaking and striking visual style, and to the brave new world of the subculture the story is immersed in. But the shining stars of the series are the central characters of that world – young female skateboarders challenging convention, finding connection and forging their identities on the streets of New York City and in the skateparks that, up until recently, were the domain of their male counterparts.

The comedy-drama stars Dede Lovelace, Kabrina Adams (aka Moonbear), Nina Moran, Ajani Russell, and Rachelle Vinberg, who all reprise their roles from the original film, essentially playing themselves.

“Me and Crystal love that we’ve turned a skatepark of skaters into actors,” says Alliah Mourad, Season 1 co-producer and now executive producer. “You’re talking about five young women who weren’t writers or creators before any of this, who sit in a writers’ room. They are collaborators in every way, shape and form.”

“I didn’t ever think that I’d be doing something like this,” says Dede. “Growing up, watching TV, I wasn’t able to relate.”

Ajani agrees: “I didn’t skateboard because I saw [pro skater] Tony Hawk and I was like, ‘Oh my god, he’s so cool, I want to be just like him.’ Because I don’t see myself in him, I just don’t.”

“When I first started skateboarding, I would only see Nina at the park, and three other girls that we still hang out with,” Ajani says. “Now, I get on the train, I see girls with boards, I see them in groups…”

“Oh there are mad girls just skating down the street now,” says Nina. “I’m like, ‘Who are you guys?’”

Ajani remains keenly aware of the pressure to represent, though. “I have to skate really hard for people to see me as a skater,” she says.

As Dede says, “You can do this at any level that you want to do it at.” But, Ajani adds, “No matter what you’re doing, you have to, like, commit. Or else you’re never gonna land a trick.”

“As I’ve grown more,” Moonbear says, “I just don’t feel the need to worry about most people’s opinions that I don’t know. They don’t know me, so it doesn’t matter.” But, she admits, “It’s hard to get to that place.”

“As a tribute to youth, and to these young women in particular, it is as invigorating as it is sweet,” says The Guardian. Salon.com says it’s about “watching a new generation of women empower themselves and the women around them, seemingly in real time. It’s celebratory, intimate and upbeat, perfect for a summer binge.”

“I feel like this year, so much of what they’re all exploring is that otherness of what they want and who they are,” says Alliah. “I hope girls walk away from this being able to say, ‘I’m glad I’m not the only one,’ and they’re happy that we’re just celebrating ourselves. That’s what I hope they walk away with – joy.”

Which is the kind of attitude that makes Betty a great pick for Pride Month. As Black Girl Nerds says, “One of the most exciting parts of the show is its depiction of normalized queer romance,” something Vogue echoes, saying, “The five stars of Betty are predominantly women of colour, several of them queer, but the show engages these realities naturalistically: Shy documentarian Honeybear (Moonbear)’s romance with an alluring fellow skater girl is treated as just that: a romance, with realistic ups and downs, rather than a teaching moment for the audience about queer love.”

Variety hails Betty as “bold as hell”; AV Club as “authentic and endearing”; GQ as a “must-see”; The Wall Street Journal as “electric, energetic and certainly freewheeling” and RogerEbert.com as “a spontaneous and deeply sincere drama about living and skating freely.”