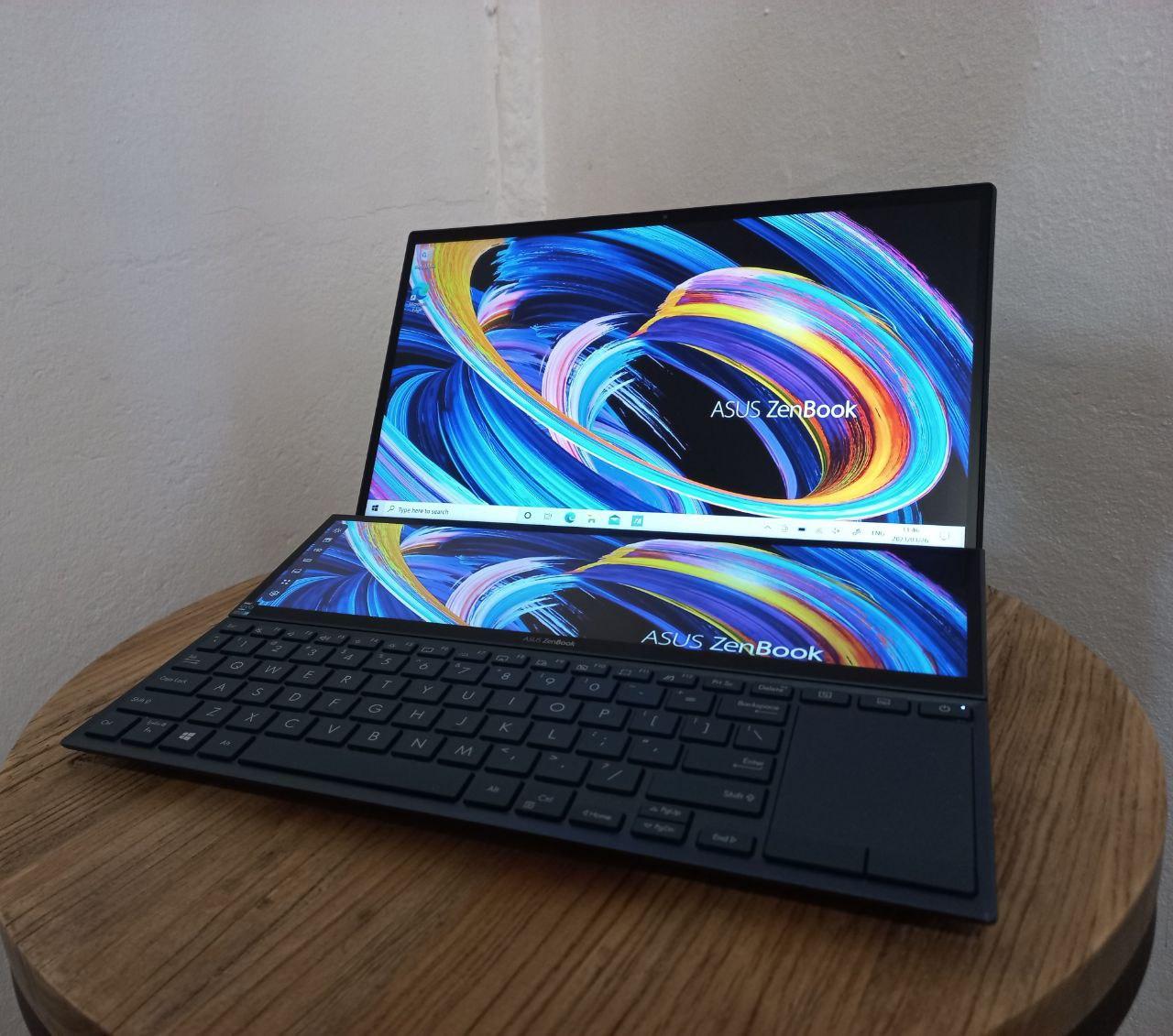 Six months ago, we got our hands on the ZenBook Duo 14 UX481 and it was one of the most innovative laptops we had encountered. With the launch of the UX482, Asus has fine-tuned the device to pack more performance in this 14″ package.

As did its predecessor, it comes with premium accessories like a stand, a sleeve, and a stylus. These accessories are a huge bonus for making the laptop more ergonomic, resistant to bumps and scratches, and versatile to operate.

The laptop features a similar magnesium-aluminium alloy as we’ve seen in the UX481, but a vastly different internal component set. When opening the laptop, the first major difference to notice is the upward tilting ScreenPad Plus, which makes the second screen feel more like an extension of the main display. This also enables airflow to enter underneath the ScreenPad Plus, which results in better cooling. This cooling is assisted by the ErgoLift hinge, which props the bottom of the laptop off the table. Better cooling from both the top and the bottom of the device is a huge win for processing-intensive tasks.

It’s slightly heavier than the previous generation, weighing in at 1.57kg, but by no means less portable than before. This weight difference can be put down to the upgrade to Intel’s 11th Gen Intel CPUs with Iris Xe graphics, which pack a large performance boost compared to previous generations. There are also configurations with Nvidia GeForce MX450 graphics, which make it ideal for video editors.

Both displays complement video editing, as they feature 100% coverage of the sRGB colour gamut. The main display is a 14” Pantone Validated touch screen at 1920 x 1080, while the ScreenPad Plus is a 12.65” touch screen at 1920 x 515. Both displays work well with the included stylus. A Windows Hello-ready 720p webcam sits above the main screen to facilitate now all-too-familiar video calls, along with face-unlock functionality.

The second screen also features some new software to turn it into a control panel. Users can assemble tools like dials, buttons, sliders, and scrollers to make a control panel that works with the main screen’s application. We tried out the control panel on Adobe Premiere Pro and it made a video mixing workflow feel like we had professional video mixing hardware at our fingertips.

The keyboard has a great tactile feel and, as with all ZenBook Duos, comes with a portrait-style trackpad to the right keys. This takes some getting used to, but video professionals will either be using a mouse or the stylus to interact with content on the screen.

The computer comes with a 1TB Samsung NVMe SSD and 32GB soldered-in RAM, both of which made multitasking much easier on this machine. With connectivity, it features an Intel Wi-Fi 6 AX200 chip, which future-proofs the computer for when Wi-Fi 6 becomes more widely available.

Overall, the UX482 improves on its predecessor in many ways, but the most important factors come down to vastly improved cooling to support the new power-intensive processing.

The Huawei FreeBuds 4i difference