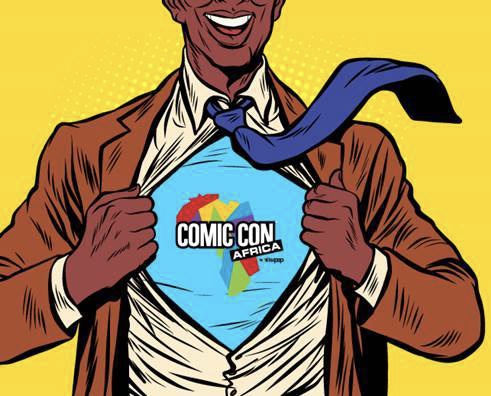 As a platform that aims to inspire and enrich people’s lives, TikTok says it offers a home for creative expression and an experience that is genuine, joyful, and positive. Since its launch, TikTok has become the go-to destination for short videos with easy-to-use video-capturing and editing tools, as well as an intelligent discovery process that makes it easy to find entertaining content that is unexpectedly personalised.

Reed Exhibitions says TikTok is a perfect fit for Comic Con Africa, as the video medium allows for incredible visual creativity and lets everyone be a content creator for their chosen passions, be it cosplay, comic arts, or any chosen pop culture fandom.

“Comic Con Africa is about uniting fans across South Africa to share what they love with likeminded people,” say the organisers

From 6 to 12 September 2019, TikTok launched the #MyCharacter challenge for fans to create transformation videos ahead of the Con. A transformation video is when a content creator flips instantly between one look to another using a fun mechanic such as a snap of the fingers, or any other way their imaginations could dream up. The creative possibilities are endless.

Comic Con Africa fans were challenged to show their characters in the lead-up to the Con, and a total of 10 winners were awarded with two weekend passes to Comic Con Africa. Check out some of the winning videos here:

In addition to the #MyCharacter challenge, TikTok will launch a second challenge, #WoahTikTok challenge, from September 21 to 27. The on-site #WoahTikTok competition session will take place on the Main Stage on Sunday 22 September, from 17h00 to 18h00.

Comic Con Africa is being held from 21 to 24 September at Gallagher Convention Centre in Midrand. Comic Con Africa is a multi-genre entertainment and comic convention that features comic books, games, arts, movies, pop culture elements and so much more.