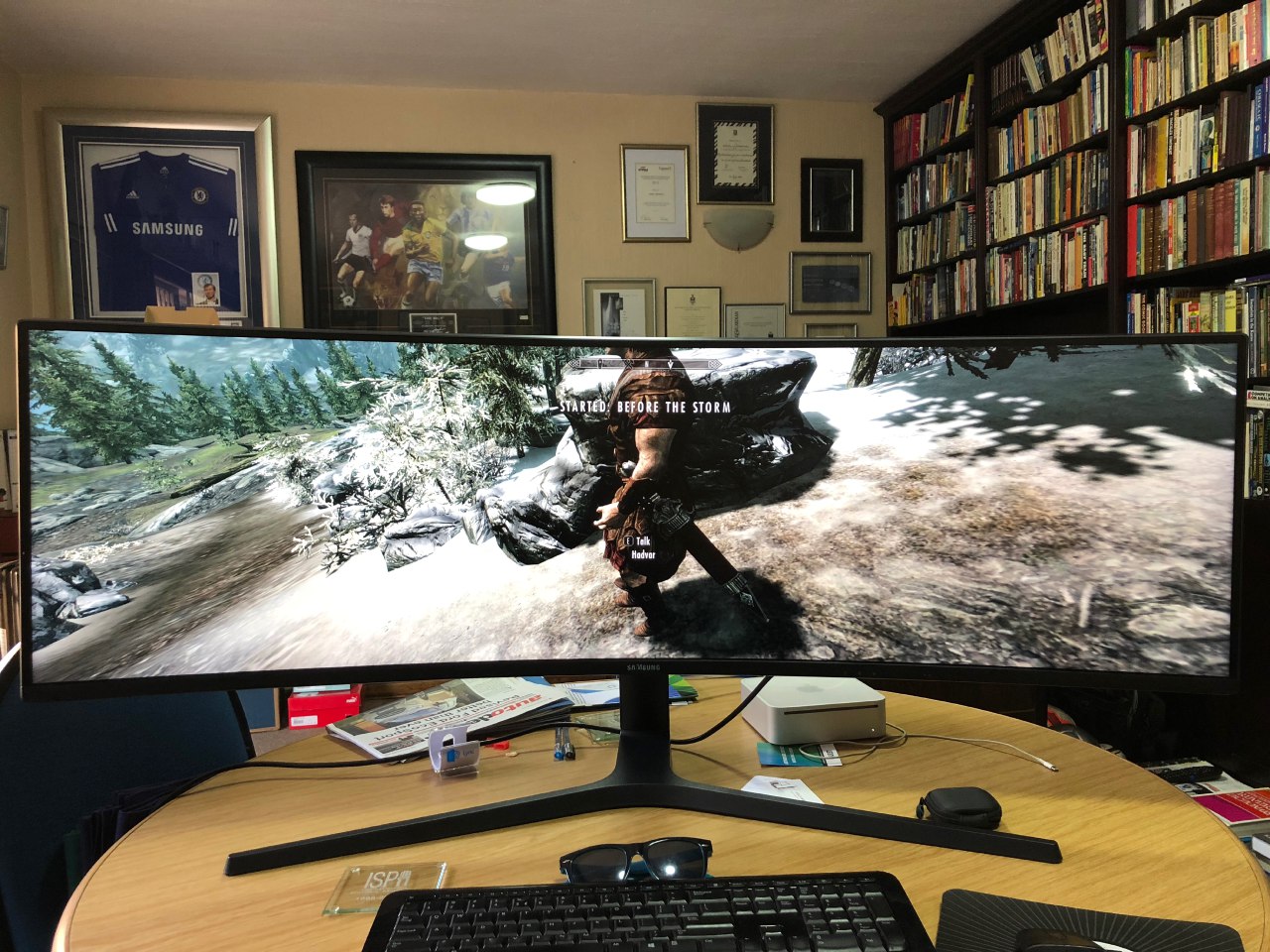 Samsung is well-known for its brilliant display, being one of the market leaders in display technology, in formats ranging from smartphones to smart TVs. It now brings an unusually good gaming monitor to market, with the launch of the CHG90 49-inch ultra-widescreen display. While this may sound too big for gaming, the diagonal 49-inch measurement is equivalent to about two regular 24-inch monitors placed side-by-side.

The monitor is hard to miss. The ultra-wide curved display leaves one feeling a little overwhelmed at first because, wherever one looks, it’s just screen. This delivers on Samsung’s claim that this monitor delivers “VR-like” experiences to gamers. The wide-legged stand sits sturdily on the desk, allowing the user to adjust the screen vertically, and allows for tilting to obtain the perfect viewing angle. That said, this monitor is so wide, that the sides of the display will probably protrude past the ends of the typical desk, while the stand might not fit on a smaller desk.

In terms of display quality, there’s definitely something to be said for QLED. There is so much attention to detail in the display layers, that it’s hard to be unimpressed with what it can replicate on screen. For example, QLED technology makes the pictures come to life with the darker pixels being less illuminated (or simply off, if it’s pure black), leaving the rest of the lighter pixels to really shine.

The 144Hz (144 frames per second) refresh rate is something to admire, as gaming becomes more lifelike with an incredibly smooth motion experience. All of this is combined with AMD Radeon FreeSync 2 support for the ultimate HDR experience in desktop gaming.

Gadget tested two operating systems, macOS and Windows 10, to get a sense of where its applications fit best. The macOS system was a Mac Mini with Intel HD Graphics 4000. This was tested as an office environment computer, running Microsoft Office and other office-like applications.

For display interfacing, we used DisplayPort, which comes built-in. The Mac played nicely with the screen, matching a colour profile directly to the screen type, ensuring true colour. The set-up could not be simpler. The refresh rate was capped at 60Hz, due to the Mac’s hardware limitations.

We split three windows across the screen, and it was excellent for multitasking. Overall, the display is well-suited for office work if one is comfortable with a two-screen setup. However, it is sheer overkill for single-screen use, and will leave one dizzy rather than more productive.

The Windows 10 system was an AMD Ryzen 1800X with an AMD Radeon RX 580. This was tested for gaming performance, where FreeSync 2 was enabled by installing the driver. DisplayPort was also used for this, as HDMI didn’t work with FreeSync 2.

The first game we tested was Skyrim with an HDR and 2X enhanced texture patch. The colours were vibrant and the wide viewing angle provided a VR-like experience similar to Skyrim VR on PlayStation – without the headset. Moreover, the adaptive eye-saver mode adjusts the screen’s blue hue to make it easier to play longer with less eye-strain.

Overall, the applications of the screen aren’t strictly limited to gaming, as the name of the monitor suggests, but it does perform best in a gaming environment with all the compatible equipment.

Its business applications were interesting, because it changes the two-screen setup, which is often opted for in software development environments. At a retail price of R19 500 from Takealot.com, this ultra-wide screen may be an option worth considering for consumers who are planning to purchase two HD screens for simultaneous use.

Are we drowning in data?
‘Data Wunderkinds’ change how banks innovate