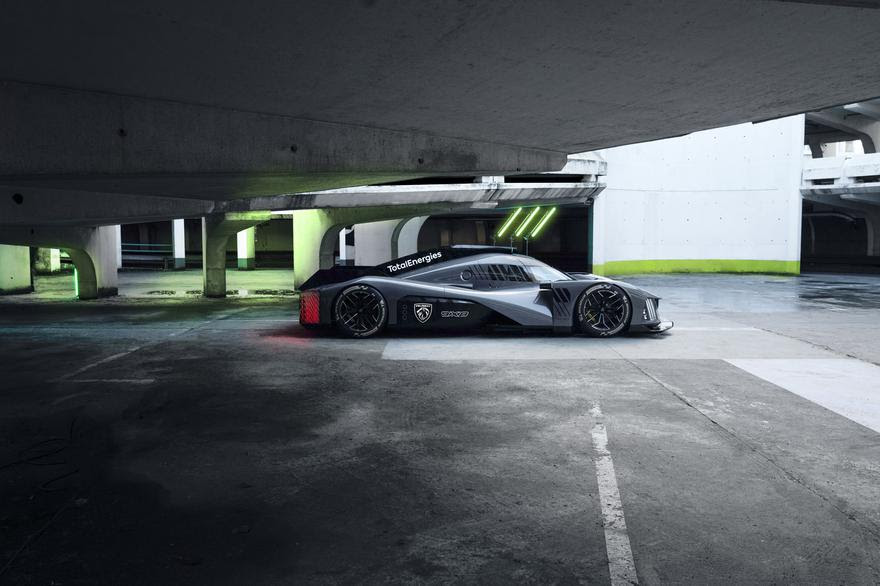 Much more than a racing car, the Peugeot 9×8 is already an iconic object, an aesthetic and technical revolution, an ultimate design adventure. Matthias Hossann, Peugeot design director, has placed it in brutalist architecture before it tackles Endurance race tracks in 2022.

To create the new 9X8 Hybrid Hypercar, the Peugeot Design team went hard out. They imbued it with all the contemporary aesthetic codes specific to the marque: a feline stance, fluid lines enhanced by signs of sportiveness, sleek and structured flanks and, of course, the characteristic three-clawed luminous signature of the Lion. Slim and sleek, the Peugeot 9X8 arouses emotion and embodies speed.

Designing a racing car is the ultimate dream of most automobile designers. The probability of that dream ever coming true was up until now close to zero: rather than the marque’s style and identity, performance was the prime consideration, so much so that racing cars had become morphologically almost indistinguishable from one another. The designers’ work was limited to small details and the livery.

For the Peugeot 9X8 Hybrid Hypercar, engineers and designers worked very closely together to achieve a convergence between style and technology to create a competitive vehicle.

“The level of discussion was absolutely unprecedented”, says Matthias Hossann, Peugeot style director. “We were in contact with the Peugeot Sport team, and really did work hand-in-hand with them. To identify the theme for our future racing car, we first launched a competition between the designers. We received a lot of submissions as this project aroused massive enthusiasm, with the prospect of one day seeing our creation compete against the world’s most prestigious brands on the most mythical of tracks.”

“Once the theme had been selected with the help of the Peugeot Sport engineers, we set to work together. Guided by performance, for which no compromise was ever made, and under innovative regulations, the engineers left as much room as possible to allow the designers freedom of creativity to develop the Hypercar’s design. The Peugeot 9X8 was born along with the DNA of the new Hypercar regulations (LMH) wanted by the Automobile Club de l’Ouest, the organiser of the 24 Hours of Le Mans and the Fédération internationale de l’Automobile, presenting the fundamental traits of a Peugeot. This car will stand as a milestone in the history of Endurance racing.”

Peugeot’s involvement in motorsport is first and foremost because it is a formidable laboratory of ideas and a fantastic innovation accelerator. For all the professions involved, automobile sport explores new territories that drive us towards being ever more original and creative in Peugeot’s approach.

The ultimate ambassador of Peugeot Design and an inspiration for future developments, the Hybrid Hypercar 9X8 sits within the trend set for the cars in the range, including the all-new Peugeot 308. It was the Peugeot 9X8 that first sported the new Lion head badge introduced in early 2021 before it also appeared on the Peugeot 308.

“The technology of the Peugeot 9X8 is entirely a Peugeot Sport creation, and we had to show that in our design. Without any compromise on performance, we wanted to give it a differentiated attitude but keep the idea of a streamlined body, which contrasts with the very geometric endurance cars of the previous generation,” says Hossann.

Another distinctive sign of Peugeot’s expertise and style is evident in the 9X8’s cabin which is based on the marque’s characteristic i-Cockpit concept. Just as for a series model project, the care taken with the interior design was matched only by the demanding level of requirement for the exterior: the driver and the fans in front of their screens must feel as though they are in a Peugeot beyond any shade of a doubt. Moreover, the entire Peugeot 9X8 cockpit was designed to provide the highest degree of ergonomics and intuitiveness for drivers.

Observers and specialists are unanimous: the Peugeot 9X8 is a radical break with previous generations of racing cars. It opens a new era. “This 9X8 is a true milestone in motorsport,” said the future drivers when they first saw it: “There will be a before and after Peugeot 9X8, and we will be lucky to have been part of it.”

“On the walls of the design studio where the Peugeot 9X8 was born, we had posted three keywords: iconic, efficient, emotional,” says Hossann. “This way, the whole team embraced these concepts, regardless of each individual’s involvement across the various development stages. I had put the word ICONIC in everyone’s mind, because I wanted a car that was both immediately recognisable and that marked a breakthrough, a fundamental generational shift.”

“Despite the quality of the many proposals that came out of our internal design competition, one was quickly established as the chosen theme. It broke the codes of the previous generation of endurance cars. The idea posited was that this would be less of a race car and more of a Peugeot, an object that would bring together fans of motor sport but not only, as this would be a sports car that could in theory be driven on the road as well as the race track.”

The most striking feature of this concept, and one that for many sums it up, is the absence of a rear wing, which gives it its different morphology.

The rear wing first appeared in endurance racing at Le Mans in 1967, and has since become the enduring standard. Since 1971, just over 50 years ago, no car has won without a rear wing. This shows the audacity and inventiveness of the Peugeot designers and engineers.

When the Peugeot 9X8 was created, a huge amount of effort was put into the rear end. Following the original sketch of a somewhat lunging car, a slightly pointed cabin appeared, along with the very particular wrap that we see today over the rear wheel

Peugeot has already won at Le Mans with two cars of two different generations: the 905 with a V10 petrol engine in 1992 and 1993, and the 908 with a V12 HDi-FAP engine in 2009. Once again, it is with the technology used that the Peugeot 9X8 marks the beginning of a new era. “Endurance racing is based on rules that allow us to demonstrate Peugeot’s expertise across all-electric power trains,” says Olivier Jansonnie, technical director for the project.

For its four-wheel drive hybrid propulsion, the Peugeot 9X8 has certain similarities with several models in the Peugeot range, such as the Peugeot 3008 or the Peugeot 508. It combines a V6 2.6-litre twin-turbocharged 500 kW (680 HP) internal combustion engine at the rear with a 200 kW (270 HP) electric motor/generator in the front.

Olivier Jansonnie says, “With the 9X8, Peugeot is starting a new chapter in hybrid sports cars. Performance is becoming more electric and more virtuous, without sacrificing anything in terms of competitiveness.”

“We wanted to signify this technological and cultural shift with a new colour signature, which we have called Kryptonite,” says Hossann. “We had already launched it shortly before our Hybrid Hypercar 9X8 on our new series model, also a hybrid: the 508 PSE (Peugeot Sport Engineering). It shares many technology features with the Peugeot 9X8, in addition to its colour. Within a few weeks of each other, both have brought the Peugeot brand into the era of electric high-performance.”