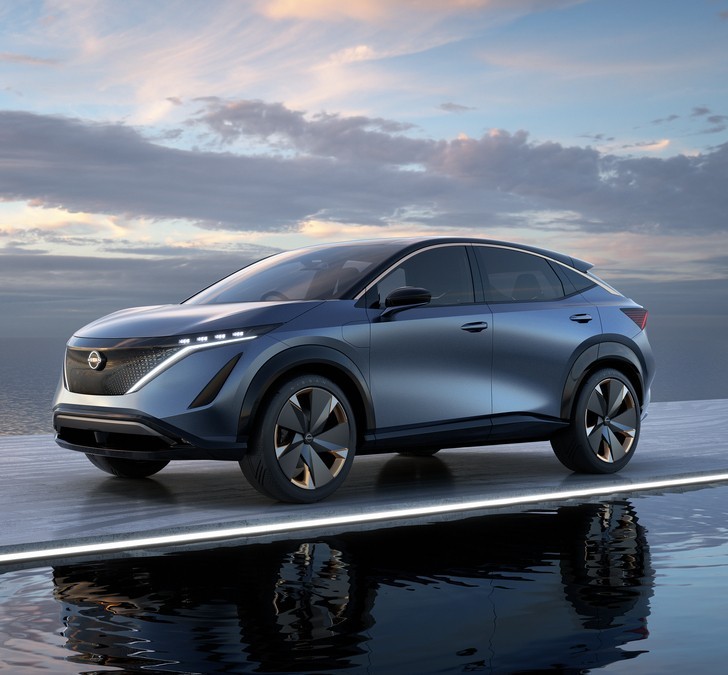 The Ariya Concept features a spacious cabin with high-tech features. It expands on design elements first hinted at by the Nissan IMx concept at the 2017 Tokyo Motor Show. They include an electrified V-motion signature “shield” and striking rear light blade, short overhangs, and an interior that feels more like a lounge than a conventional vehicle.

Although it’s a concept vehicle, the crossover EV’s bold styling and unconventional interior and exterior elements could make it into production in the near future.

“The Ariya Concept represents a strong collaboration between design and engineering,” says Yasuhiro Yamauchi, representative executive officer at Nissan. “It is the next stage of Nissan’s future design language as we embark on a new era for the company – the next stage in our evolution.”

The Ariya Concept shares the stage at the Tokyo Motor Show with the Nissan IMk, an EV urban commuter concept revealed earlier this month. The two vehicles serve as “bookends” for Nissan’s new vision of an electrified brand identity.

“A new vehicle architecture means fresh opportunities to redefine how vehicles interact with society, how an EV paired with advanced driving capabilities can offer a new perspective,” says Alfonso Albaisa, Nissan’s senior vice president of global design. “With this vehicle and the IMk concept, we wanted to ensure that the soul of every Nissan car possesses a distinctive Japanese DNA conveyed in a simple-yet-powerfully modern way, something we call ‘Timeless Japanese Futurism.’”

Characterised by the concepts “sleek,” “seamless” and “sexy,” the Nissan Ariya Concept features examples of this new design language throughout the exterior, including wide front fenders, super-thin LED headlights, and front shield (typically a grille on a gasoline-powered vehicle). The shield incorporates a subtle geometric pattern that reveals itself when the electrified V-motion signature is illuminated.

“We replaced the conventional grille with what we call a ‘shield’ – an expressive piece with innovative 3-D texture within that goes beyond cosmetics, but also as a way to highlight the technology lurking within the vehicle,” says Albaisa. “In this case, it’s a radar sensor and other technologies that help the Ariya Concept read the road and visualize things the driver can’t see.”

Highlighting the vehicle’s profile are five-blade, 21-inch aluminium wheels with custom tires. A low, sleek roofline allows the vehicle to reduce air friction. The styling of the Ariya Concept’s rear is also a departure from traditional SUVs, with a steeply raked C-pillar that blends into a muscular rear deck. A one-piece light blade with blacked-out lenses runs across the width of the body. Rear fender flares and a high-mounted rear wing offer not-so-subtle suggestions of the vehicle’s power.

“With a flat floor – made possible by the battery pack layout and absence of an internal combustion engine– the Ariya Concept welcomes occupants as they step in the cabin with a feeling of expansion and openness. Panels blend naturally into each other and flow seamlessly from the front, sides and rear, giving a panoramic impression from any seat position.”

The minimalist dashboard is uncluttered by the buttons and switches found in conventional vehicles. When the Ariya Concept is energised, integrated haptic touch controls along the instrument panel come to life with a glow. When the car is not in use, they disappear into the surface. The only physical controls are the start button, a single knob to operate the 12.3-inch display monitor, and the climate controls, which are ingrained into the instrument panel’s genuine-wood lower section. The instrument panel transitions into the doors and interior elements, to be out of sight when not in use.

The Ariya Concept features the latest version of Nissan’s award-winning driver assistance system, ProPILOT 2.0, for a more confident and comfortable drive. The system combines navigated highway driving with hands-off single-lane driving capabilities. By engaging the vehicle’s navigation system to help manoeuvre the car on a predefined route on designated roads, the system can assist the driver with passing, lane diversions and lane exiting on multi-lane highways.

Built with a high-performance, 100% electric drive system, the Nissan Ariya Concept delivers instant torque to the wheels from a dual front/rear motor drive configuration. This layout delivers balanced, predictable power to all four wheels, equal to or better than many premium sports cars.

“Nissan has a clear vision of global mobility. The Ariya Concept is just the beginning, as Nissan considers how design, packaging and driver enjoyment can be transformed through the architecture of new EV platforms,” says Yamauchi. “The Ariya Concept is not a concept car designed from far off ideas, but rather a car that embodies Nissan Intelligent Mobility at its core and highlights a promise of an entirely new driving experience on the horizon.”

Related Topics:Nissanproduct of the day
Up Next

Three new chipsets by Qualcomm, the Snapdragon 720G, 662, and 460, have been released to address the growing need for faster 4G and Wi-Fi 6 connectivity. 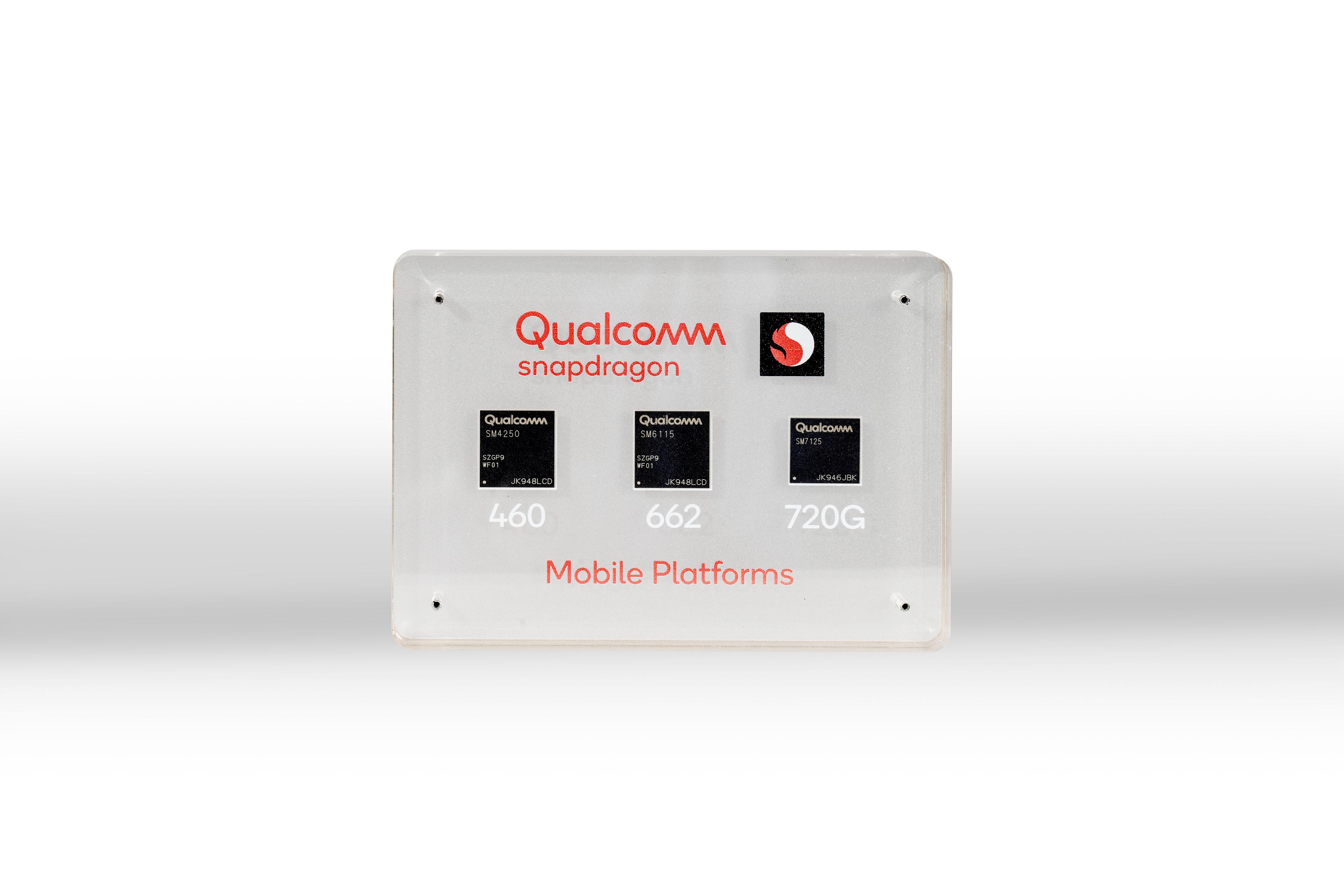 “While we see a fast adoption of 5G across geographies globally, we do recognise the phenomenal boost that 4G has given towards enabling broadband connectivity for Indian consumers,” said Rajen Vagadia, president of Qualcomm India. “4G will continue to remain a focus area for Qualcomm Technologies for regions like India, where it will stay a key technology for connectivity. Our goal is to enable our partners to continue creating solutions that offer seamless connectivity access and exceptional mobile experiences, that consumers can count on.”

For the first time supported on mobile, the Qualcomm Location Suite now supports up to seven satellite constellations concurrently, including the use of all of NavIC’s operating satellites, for more accurate location performance, faster time-to-first-fix (TTFF) position acquisition, and improved robustness of location-based services.

The integrated Snapdragon X15 LTE modem supports 3-carrier aggregation, 4×4 MIMO on two carriers and 256-QAM modulation for fast download speeds up to 800 Mbps – allowing for quick app downloads and smooth video streaming and sharing. In addition, it doubles Wi-Fi speed and range, compared to single antenna devices, while also delivering key Wi-Fi 6 features such as 8×8 sounding with multi-user MIMO for up to 2x improvement over competitive Wi-Fi 6 devices.

The Snapdragon 662 adds new camera and AI capabilities to the 6-series for the first time. It will feature the new Qualcomm Spectra 340T, which supports triple camera configurations and smooth switching between them — a first in the 6-series.

It also features the new Snapdragon X11 LTE modem with peak download speeds up to 390 Mbps thanks to 2-carrier aggregation, 2×2 MIMO and 256-QAM modulation, along with 150 Mbps peak uploads to support a snappy web browsing and social media experience.

The Qualcomm Spectra 340 ISP is also among the many new additions to the 4-series, enabling the platform to capture sharp photographs and support for triple cameras. An integrated Snapdragon X11 LTE modem allows for download speeds up to 390 Mbps and uploads up to 150 Mbps.

Nissan’s expertise in electric vehicles and high-performance vehicles have come together in the Nissan Leaf Nismo RC.

The all-wheel-drive Leaf Nismo RC boasts more than double the maximum power and torque output of its predecessor, which was based on the first-generation Leaf and revealed in 2011. Delivering 322hp and 640Nm of instantly available torque, it offers lightning-quick acceleration, achieving the 0-100km/h sprint in just 3.4 seconds.

The creation of the latest Leaf Nismo RC is not just for show; it acts as a testbed for future technological evolution and showcases the potential of Nissan electric vehicles. It explores what can be achieved with an all-electric twin-motor and all-wheel-drive drivetrain.

It shares its advanced technology with the Leaf road car, and touched down in Europe for the first time at Circuit Ricardo Tormo in Valencia, Spain.

“Nissan’s experience as a pioneer in electric vehicles for the road, combined with Nismo’s 60-plus years of motorsport innovation, led to the conception of a unique car,” says Michael Carcamo, Nissan Global Motorsport Director. “For Nissan, the ‘E’ in ‘EV’ also stands for ‘Exciting’. Putting this philosophy front and centre, we created the Leaf Nismo RC. It amplifies the fun-to-drive aspect of electric mobility, raising the thrills offered by EVs to a new level.”

As with the Leaf Nismo RC, instant acceleration is a feature of every Nissan EV model. The all-electric powertrains offer a fast driving experience that is complemented by the Leaf’s intelligent design and advanced connectivity.