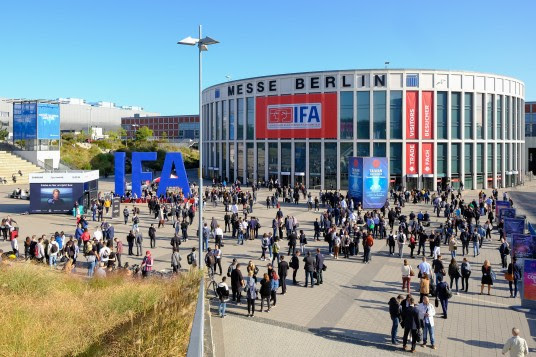 IFA Berlin has achieved a new all-time high for international attendance, with more than 50 percent of trade visitors coming from abroad. The event attracted nearly 2,000 exhibitors and 245,000 visitors, solidifying its reputation as the biggest consumer technology event in the world by number of visitors. CES in Las Vegas remains bigger in terms of floor space and exhibitors.

Two IFA Keynotes – by Huawei CEO Richard Yu and Qualcomm President Cristiano Amon – focused on how 5G-connectivity can push the power of artificial intelligence to the very edge of computing – in the devices, into vehicles and into industrial applications.

Anthony Wood, the CEO of Roku – which powers one third of all set-top boxes in the United States – used his keynote to outline his vision of how online streaming will dominate the TV experience, and announced his company’s expansion to the UK, with plans to move to other European countries as well. Hakan Bulgurlu, the CEO of Arçelik, dedicated his keynote to demanding industry action against climate change and plastic waste.

IFA’s innovation hub – IFA NEXT – also set new records with more start-ups and innovation leaders than ever spread across two halls, alongside research institutes from countries like Germany, Japan and Korea. This year, IFA NEXT hosted Japan as its first Global Innovation Partner country; the Japan pavilion was showcasing the newest ideas and innovations for how machines and humans can interact.

Keita Nishiyama, Director General of Commerce and Information Policy – Bureau, Ministry of Economy, Trade and Industry says “We hope that Japan’s Interface with Consideration and Sensibility has inspired IFA visitors to embrace the future and continue on the path of innovation. As the first partner country of IFA NEXT – we look forward to staying in touch with you. Please follow us as Ninja does!”

Once again, IFA Berlin lived up to its reputation as the world’s most important trade show for consumer electronics and home appliances.

“As an important driving force for trade and industry and the world’s most important platform for consumer electronics and home appliances, IFA 2019 met the high expectations. With its large number of innovations, it has a positive influence on the mood in the international markets. With an unexpectedly stable high order volume in regard to the current market situation, the foundation was laid for a successful year-end business,” explains Hans-Joachim Kamp, Chairman of the Supervisory Board of IFA organizer gfu Consumer & Home Electronics.

“We are satisfied with the results of IFA 2019. Accordingly, the household appliance industry is optimistic about the future. This year too, IFA has strengthened its position as the world’s significant trade show for home appliances and made a positive contribution to the market development,” states Dr. Reinhard Zinkann, Chairman of the ZVEI.

The CEO of Messe Berlin, Dr. Christian Göke says IFA had once again shown the “power of co-innovation, where inventors in different sectors and industries inspire each other.” He warned that trade wars, trade barriers and political barriers would harm consumers not just by making products more expensive, but by slowing down innovation itself. Picking up a theme developed in one of IFA’s most famous keynotes, by Albert Einstein in 1930, Dr. Göke said that in today’s day and age Einstein would probably “call on the best and the brightest minds in the world, whoever they are, and wherever they live, whichever country they call their home, to pool their knowledge and co-innovate to create a better world.”

IFA Executive Director Jens Heithecker was hugely impressed by the level of innovation: “As the number of exhibitors has grown, so did the quality and quantity of innovations as well as the number of product premieres that were shown here in Berlin for the first time.”

Global media attendance has gone up yet again; the journalists coming to Berlin work for media organisations covering 160 countries around the world. This shows how important IFA is in the calendar for technology and lifestyle journalists. This year, IFA attracted some 2.800 international journalists from around the world.

Among the broadcasters reporting from IFA Berlin were Al Jazeera from the Arab Emirates, NDTV from India, Nine Network from Australia, the BBC from the United Kingdom, IBA International from Israel, TEKNAVI from Finland, CNBC from the USA, CGTN / CCTV, Global Times as well as the Phoenix Group from China. From France teams from Eurosport, 01net TV, LCI, BFM TV, OUATCH.tv, France 24 and ES 1 reported on the latest IFA news. News agencies such as AP and Reuters were represented, alongside public broadcasters working through the EBU and private broadcasters cooperating through ENEX.

80 ways IoT can change your life, your work, your car

The worldwide market for used smartphones is forecast to grow to 332.9 million units, with a market value of $67 billion, in 2023, according to IDC

This growth can be attributed to an uptick in demand for used smartphones that offer considerable savings compared with new models. Moreover, OEMs have struggled to produce new models that strike a balance between desirable new features and a price that is seen as reasonable. Looking ahead, IDC expects the deployment of 5G networks and smartphones to impact the used market as smartphone owners begin to trade in their 4G smartphones for the promise of high-performing 5G devices.

Anthony Scarsella, research manager with IDC’s Worldwide Quarterly Mobile Phone Tracker, says: “In contrast to the recent declines in the new smartphone market, as well as the forecast for minimal growth in new shipments over the next few years, the used market for smartphones shows no signs of slowing down across all parts of the globe. Refurbished and used devices continue to provide cost-effective alternatives to both consumers and businesses that are looking to save money when purchasing a smartphone. Moreover, the ability for vendors to push more affordable refurbished devices in markets in which they normally would not have a presence is helping these players grow their brand as well as their ecosystem of apps, services, and accessories.”

Says Will Stofega, program director, Mobile Phones: “Although drivers such as regulatory compliance and environmental initiatives are still positively impacting the growth in the used market, the importance of cost-saving for new devices will continue to drive growth. Overall, we feel that the ability to use a previously owned device to fund the purchase of either a new or used device will play the most crucial role in the growth of the refurbished phone market. Trade-in combined with the increase in financing plans (EIP) will ultimately be the two main drivers of the refurbished phone market moving forward.”

According to IDC’s taxonomy, a refurbished smartphone is a device that has been used and disposed of at a collection point by its owner. Once the device has been examined and classified as suitable for refurbishment, it is sent off to a facility for reconditioning and is eventually sold via a secondary market channel. A refurbished smartphone is not a “hand me down” or gained as the result of a person-to-person sale or trade.

The IDC report, Worldwide Used Smartphone Forecast, 2019–2023 (Doc #US45726219), provides an overview and five-year forecast of the worldwide refurbished phone market and its expansion and growth by 2023. This study also provides a look at key players and the impact they will have on vendors, carriers, and consumers.

Customers will take far more control of their travel experience in the 2020s, according to a 2020 Trends report released this week by Travelport, a leading technology company serving the global travel industry.

Through independent research with thousands of global travellers – including 500 in South Africa – hundreds of travel professionals and interviews with leaders of some of the world’s biggest travel brands, Travelport uncovered the major forces that will become the technology enablers of travel over the next decade. These include:

Several trends highlight the finding that customers are moving towards self-service options, with 61% of the travellers surveyed in South Africa preferring to hear about travel disruption via digital communications, such as push notifications on an app, mobile chatbots, or instant messaging apps, rather than speaking with a person on the phone. This is especially important when it comes to young travellers under 25, seen as the future business traveler, and managing their high expectations through technology.

With the threat of super app domination, online travel agencies must disrupt or risk being disrupted. Contextual messaging across the journey will help. Super app tech giants like WeChat give their users a one-stop shop to communicate, shop online, book travel, bank, find a date, get food delivery, and pay for anything within a single, unified smartphone app. Travel brands that want to deliver holistic mobile customer experiences need to think about how they engage travellers within these super apps as well as in their own mobile channels.

In the next year, research shows, we will see an accelerated rate of change in the way travel is retailed and purchased online. This includes wider and more complex multi-content reach, more enriched and comparable offerings, more focus on relevance than magnitude, and an increase in automation that enables customer self-service.

“How customers engage with their travel experience – for instance by interacting with digital ‘bots’ and expecting offers better personalised to their needs – is changing rapidly,” says Adrian Roodt, country manager for Southern Africa at Travelport. “We in the travel industry need to understand and keep pace with these forces to make sure we’re continuing to make the experience of buying and managing travel continually better, for everyone.”