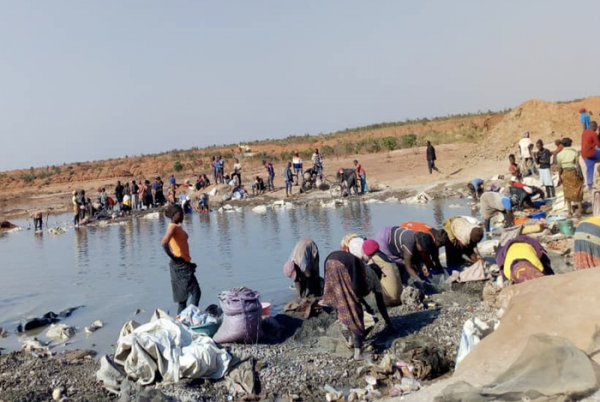 Miners at a cobalt cleaning site in DRC wash ore in water, rendering it unsafe to drink.

While driving an electric car has fewer environmental impacts than gasoline-powered cars, the production of the parts necessary for these green technologies can have dire effects on human well-being.

After studying the impacts of mining cobalt — a common ingredient in lithium-ion batteries — on communities in Africa’s Democratic Republic of the Congo (DRC), an interdisciplinary team of researchers led by Northwestern University is calling for more data into how emerging technologies affect human health and livelihoods.

The case study and perspective paper will be published on 17 December in the journal One Earth.

“We have the framework and tools available to compare the environmental costs of automobiles that run on fossil fuels to battery-powered vehicles,” says Northwestern’s Jennifer Dunn, who led the study. “I can tell you the greenhouse gas emissions per mile for either one. But when it comes to the social effects, we don’t have the same capability for direct comparison. For many engineers, it’s easier to measure or calculate environmental effects than to understand the social conditions in a faraway country that they have never set foot in.”

Dunn is an associate professor of chemical and biological engineering at Northwestern’s McCormick School of Engineering and associate director of the Center for Engineering Sustainability and Resilience. To conduct the case study, Dunn led an interdisciplinary team of engineers, anthropologists and public health experts.

For years, researchers have been conducting environmental life cycle assessments (E-LCA), in which they comprehensively and systematically calculate the environmental impacts of a product all the way from the extraction of raw materials required to make it to its use and ultimate disposal. More recently, researchers have attempted to develop similar frameworks to evaluate social life cycle assessments (S-LCA), which can be used to understand how emerging technologies affect human health and well-being.

To identify barriers to and opportunities for collecting better data for S-LCA, the researchers conducted exploratory fieldwork in cobalt mining communities in the Lualaba Province, DRC. The team collected qualitative data through in-depth interviews and focus-group discussions with miners and other community members. Paper co-author Gabriel Bamana, an anthropologist on faculty at Normandale Community College in Minnesota, is native Congolese and therefore could provide significant cultural and historical context for the study.

“For this type of work, it’s important to work across fields in order to be informed,” says Sera Young, study co-author and associate professor of anthropology at Northwestern’s Weinberg College of Arts and Sciences. “It might be difficult for engineers who are developing the technologies to understand the social effects. By working together, we can form a whole picture of the consequences of resource extraction.”

What Dunn and Young discovered was deeply troubling. They found cobalt mining was associated with increases in violence, substance abuse, food and water insecurity, and physical and mental health challenges. Community members reported losing communal land, farmland and homes, which miners literally dug up in order to extract cobalt. Without farmland, Congolese people were sometimes forced to cross international borders into Zambia just to purchase food.

“You might think of mining as just digging something up,” Young says. “But they are not digging on vacant land. Homelands are dug up. People are literally digging holes in their living room floors. The repercussions of mining can touch almost every aspect of life.”

As industry leaders move toward decarbonization to slow, stop or even reverse human-caused climate change, technologies are increasingly relying on batteries instead of fossil fuels. Unfortunately, the effects of these technologies on social well-being are understudied and data related to these effects are insufficient for use in policy-making decisions.

“If we’re trying to be do-gooders by caring for the environment, then the environment shouldn’t be limited to only the natural environment — but also the human environment,” says Young, who studies water insecurity across a range of global contexts.

Throughout their work, Dunn, Young and their team found little in the way of established guidance on best practices for conducting S-LCA, including little guidance on how to conduct interviews and a lack of consensus on how to use and analyze data from stakeholders.

“Most of this work has been conceptualized by natural scientists who have limited knowledge about social impacts,” Dunn says. “Measuring environmental effects of a technology is sometimes as simple as adding a sensor to measure emissions. But trying to measure intangible social effects like mental health is much harder.”

Because the quality of the social impact assessment relies on the quality of the data, the researchers identified five categories of data sources, which can be leveraged to better understand localized effects of mining: (1) interviews and focus groups of affected community members; (2) local public records, including land-related court claims, documentation of forced migration and publicly available health records; (3) cross-culturally validated scales, including data collected by national statistics agencies and organizations such as UNICEF and the World Bank; (4) data collected for the Sustainable Development Goals; and (5) remote sensing and imagery, including satellite imagery showing how farmland has changed after cobalt mining is established.

The researchers believe such methods can be applied to other scenarios beyond cobalt mining to gather social data surrounding emerging technologies.

“We have a long way to go before we can put S-LCA results in front of decision-makers in the same way we can with E-LCA results,” Dunn says. “In the meantime, our society is going through huge changes, including climate change, so we feel a sense of urgency. We hope that policymakers recognize the urgency of the human costs of cobalt mining sooner rather than later.”

The study, “Addressing the social life cycle inventory analysis data gap: Insights from a case study of cobalt mining in the Democratic Republic of the Congo,” was supported by Leslie and Mac McQuown, the Northwestern Institute on Complex Systems and the Carnegie Corporation.

Innovation not enough to save the world

Soon, being environment-friendly won’t be a choice