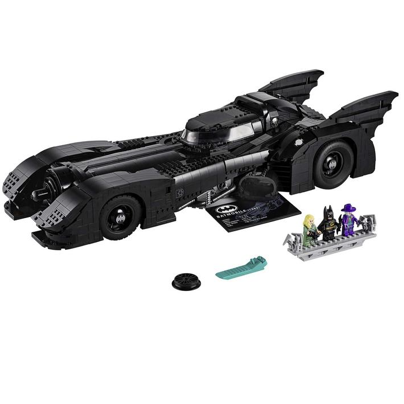 Tim Burton’s 1989 movie adaptation, Batman, was memorable for multiple reasons – Michael Keaton’s brooding Batman and Jack Nicholson’s haunting The Joker,for a start. However, fans could argue that the Batmobile featured in the film was indeed its hero. Now the caped crusader’s ride has been transformed into the LEGO DC Super Heroes 1989 Batmobile.

Made at a time when superhero movies were less appealing to the mainstream, and more synonymous with geek culture, the 1989 Batman movie was still the first film to ever hit $100 million in 10 days, and was Warner Bros’ biggest earner of the year – without any toy and merchandise sales.

Thirty years, eight movies and lots of great merchandise later, 1989 Batman’s ‘cool’ factor has been boosted even more by the coolest merchandise ever, with the Lego DC Super Heroes 1989 Batmobile bringing the movie to life for fans the world over.

The set commemorates 80 years of the Batman character, and celebrates an all-time classic film that introduced a new dimension to the popular superhero. The Lego DC Super Heroes 1989 Batmobile includes:

This 3,306 piece extravaganza of superhero fandom and brickaholic joy is now exclusively available at Lego Certified Stores in Sandton City, Menlyn Park, Canal Walk, and Gateway, for R4,499, with a free gift with the 40433 Lego Limited Edition 1989 Batmobile Gift, valued at R529, while stocks last.

The main set and gift with purchase are also available on www.greatyellowbrick.co.za