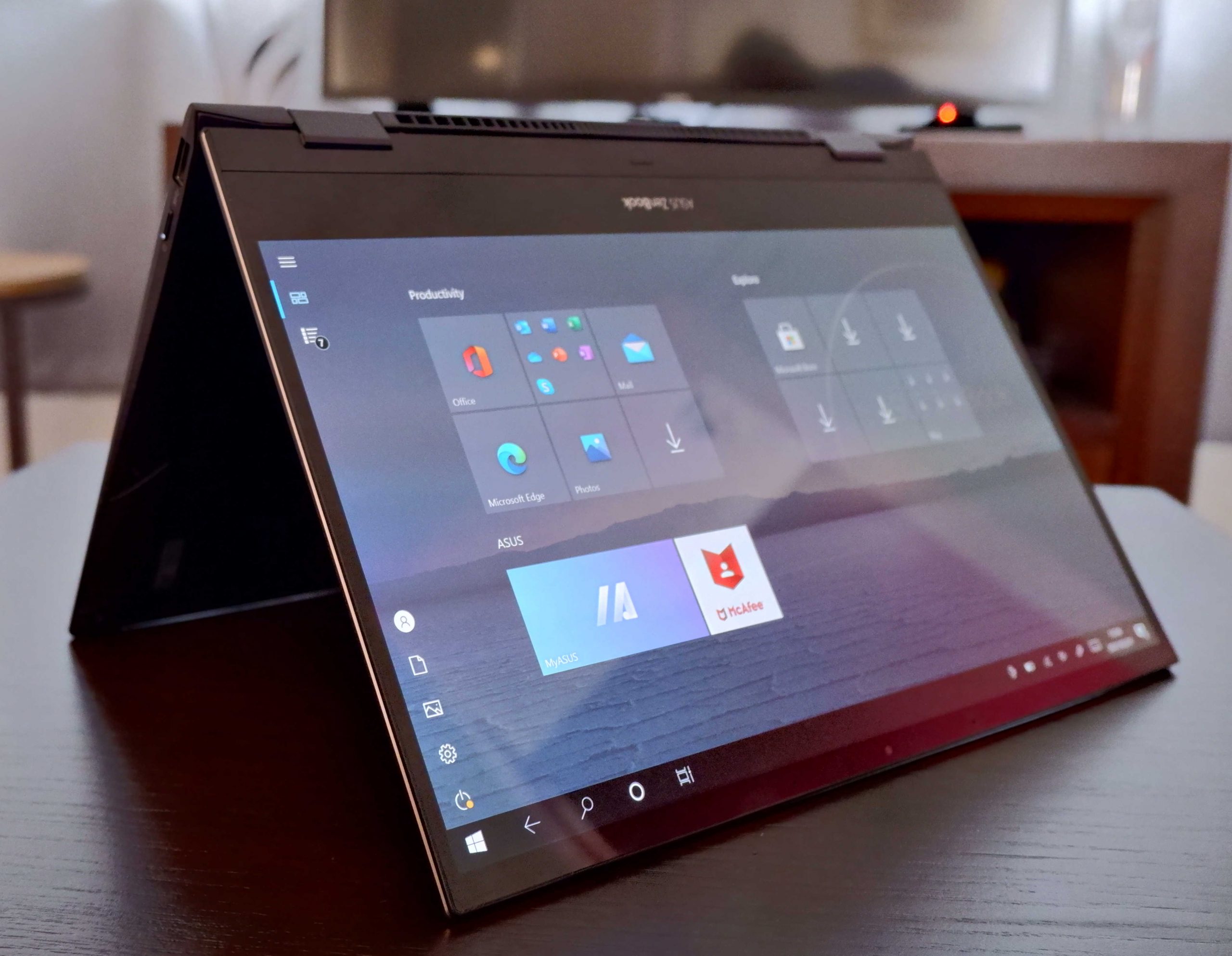 Many graphic artists will say their next big hardware purchase will need a pressure-sensitive stylus function with a high-quality screen. Asus has managed to fit these features into its new Asus ZenBook Flip S (UX371), along with all the robust functionality one can get from Windows-compatible graphics suites.

When unboxing the laptop, it becomes very evident that Asus has focused on this device being as light as possible to cater to graphic artists. Weighing 1.2kg, this makes the device one of the lightest Intel i7 laptops we’ve encountered.

Other accessories in the box include a protective sleeve, a pressure-sensitive stylus, a USB-A to gigabit LAN adapter, and a USB-C to 3.5mm audio jack adapter. As implied by all the adapters, the ports on the laptop are limited to the essentials. That said, the average user with wired headphones could just leave the small USB-C adapter attached to the end of their earphones. The lack of a built-in Ethernet port isn’t a significant loss, especially since it supports Wi-Fi 6.

A full-sized HDMI port and two Thunderbolt 4-ready USB-C ports, either of which can be used for charging and a charging indicator — a feature Mac users will appreciate – lie on the left. On the right, a single USB-A 3.1 Gen 2 for legacy accessories, and the power button.

Opening the laptop reveals the 13.3” 4K OLED screen, which can be folded back into tablet mode — easily the selling-point of this laptop. The combination of OLED, 4K resolution and HDR, make this easily one of the best laptop screens for creatives. It’s also Pantone validated — covering 100% of the DCI-P3 colour gamut. Combining this with the included stylus that supports 4096 levels of pressure, graphic artists and note-takers can have a near-paper-like experience with the screen. The stylus’s input latency was comparable to that of a 3rd generation iPad Pro, making the UX371 the better option for those who want more accurate colour.

A neat addition is the Windows Hello IR camera, which allows users to sign in with their faces. We tried using print-outs and another screen showing the registered face, and the computer wouldn’t unlock. It’s a similar dot-projection technique as in the newer iPhones, so it’s also secure. It works across profiles so, if there are several users, the user who is looking at the screen will be signed in to the appropriate account.

The performance is rock solid. We edited and exported 1080p video for our Gadget Original YouTube channel, The Future Fast, and it took just over real time to do it. This is an impressive result from the integrated Intel Iris Xe graphics, considering this is an export time to a desktop PC with an Nvidia GeForce GTX 1050.

What helped tremendously during editing was the 1TB PCIe 3.0×4 SSD for blazing-fast storage and the 16GB of RAM for keeping my programs running smoothly. While performing heavy tasks, the computer lasted around 7 hours, which was far more than we were expecting from an ultrabook. When doing lighter tasks like word processing and video streaming, it lasted just over 14 hours. To charge up the PC, it uses a 65W USB Type-C power supply. We tried to charge it up again with a Samsung 25W charger, and it works — but only in a pinch, because it takes much longer to charge up compared to the included charger.

Asus says it put this computer through a MIL-STD-810G test, meaning it’s been through extreme heat and cold, high altitudes, and humid conditions. It also features a spill-resistant keyboard design, which helps put a user’s mind at ease. We didn’t test any of these claims but, just by feeling the sturdy design, we can tell this laptop can take a few knocks and still function.

Overall, graphic artists will appreciate the power and feature versatility that the UX371 brings to the table. The laptop costs R31,000 from Evetech.