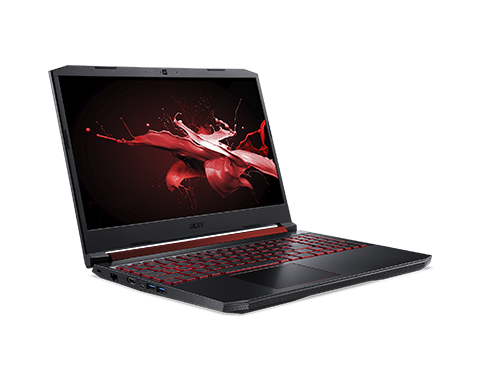 Nitro, otherwise known as the “budget” gaming range from Acer, has added another strong contender to its line-up: the Nitro 5. We put budget in quotation marks because, while it is less expensive than other gaming laptops, it feels and acts like the opposite of budget – the build is sturdy and premium, while the internals are really decently spec’d for gaming.

The Nitro 5 is an all-polycarbonate plastic laptop with sharp edges, making it sturdy enough for taking around. While we didn’t drop it, it looks like it could take a few knocks and still be fine. It comes in at 25mm thick and weighing 2.3kg, so pretty thick at first glance. It features a red grill on the back that’s reminiscent of the Predator series, but remains distinctly its own brand. The red theme follows on to the rest of the laptop, and it features a red-backlit keyboard. While many would scoff at an all-plastic design, it does help in taking the laptop apart for future upgrades, something to consider in an ever-improving gaming market.

The thickness is to account for all the cooling goodness within the laptop. Gaming, video editing and other process-intensive work require a whole lot of cooling, and the Nitro 5 can comfortably sit on one’s lap at max capacity and not overheat.

It houses a dedicated Nvidia GeForce GTX 1650 that can be spec’d with up to 4GB of graphics memory. When I discovered this, I started to ask myself: “Wait, the cooling system plus a GTX 1650? How is it so thin?” On top of this, Acer didn’t cut corners with the built-in display, which is a full HD IPS LED panel. It reads well from many different angles, which was perfect for showing a group of people some content.

We tested Rise of the Tomb Raider at 1080p, with the GTX 1650, and set the game to its “very high” preset graphics settings. The game’s frame counter was used. It hovered between 65 and 70 frames per second (fps) with 10 minutes of gameplay, which is really good compared to other laptops that are a few thousand Rand more expensive and perform the same.

The processor is a 6-Core 9th Generation Intel Core i7 CPU (i7-9750H), which provides snappy performance. We noted a start-up time from shutdown to desktop of 10 seconds. This was made possible by a combination of the fast processor and solid-state drive in the computer. It also makes opening programmes lightning fast.

The keyboard is one of my favourite aspects of this computer. Acer is known for a deep key travel that feels stable, which is ultimately what every gamer wants from their machine, short of the keyboard being mechanical. The WASD arrow keys have been done proper justice – they are big and let out a bit more backlight than the others. This is a huge ergonomic win for gamers.

Now for the trackpad. The off-centre trackpad placement feels a bit weird, even though it’s in line with the space bar. It lends itself to having one’s left palm lean on it, which makes it feel like it’s in the way. That said, the trackpad’s quality is fine but, obviously, not for gaming.

The laptop’s battery is 58.75 Wh, which may seem like it’s on the low side, but it powered through an 8 hour workday on a single charge. If the brightness is turned all the way up, that changes it to more of a 5 hour workday. We played Doom Eternal for about 2 and a half hours before we needed to charge it.

The computer’s sound was pretty good across various scenarios.

It will be available from under R20 000 in its 512GB SSD + 8GB RAM configuration, putting it way below other gaming brands with similar specs.

Related Topics:Acerproduct of the day
Up Next