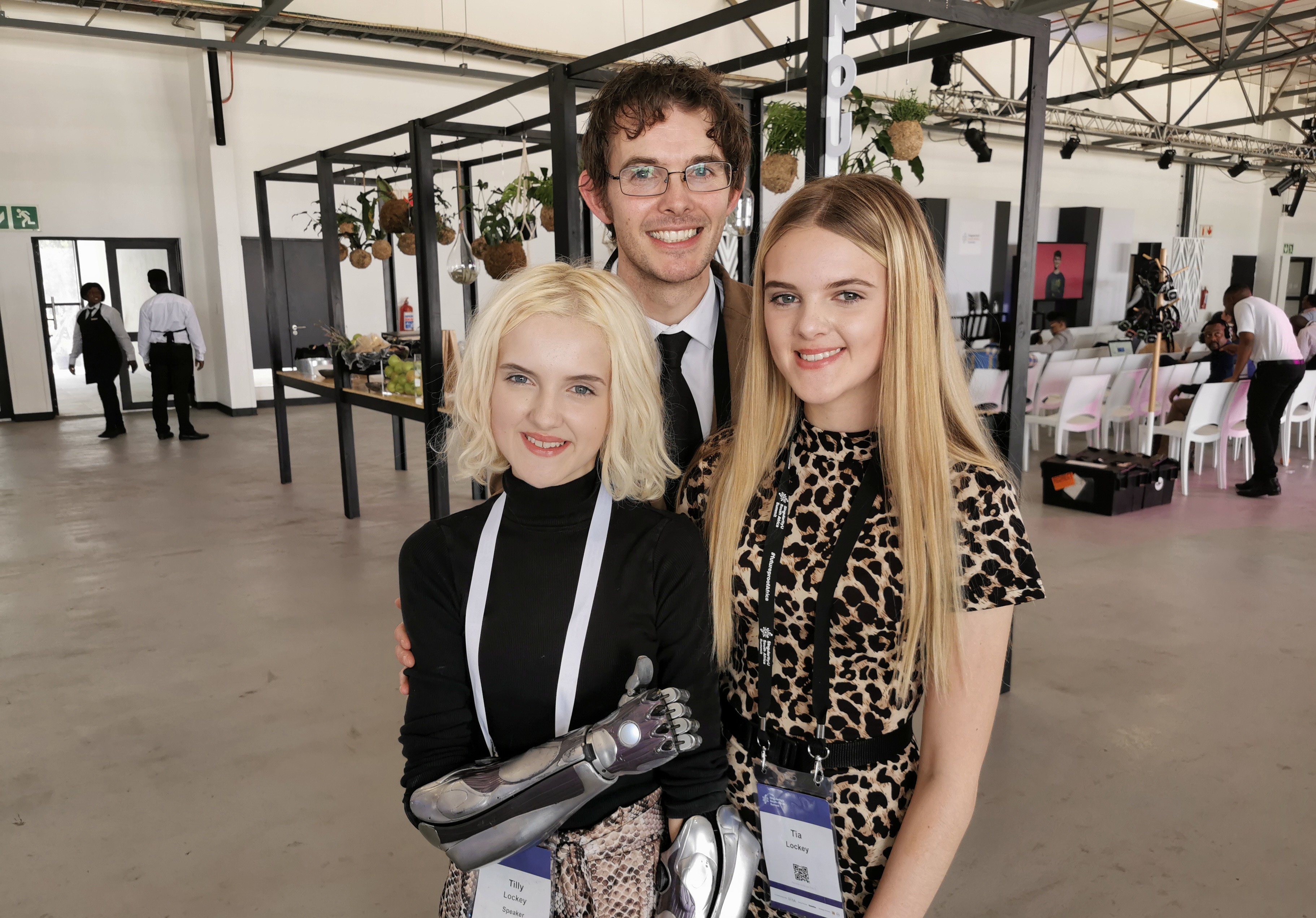 This is the third part of this series of articles. To start from the beginning, click here.

Tilly Lockey’s life as a cyborg – a word she has used to describe herself – revolves not around high-tech gadgets, but rather is grounded in her own family life.

Her parents and older sister are deeply involved in almost every aspect of her budding career as a speaker, brand ambassador and innovator. She was in South Africa last week with her father Adam, a maths and science teacher, and sister Tia, a typical 16-year-old teenager. Typical, that is, according to Adam.

“She has to have Wi-FI wherever she goes,” he quips. “Tia does a lot of the videography for Tilly, and she also does nature videos. Whenever we go away, Tia wants to go with us. In South Africa, she is so excited about going to the bush, to see the Big Five.

His wife Sarah usually chaperones Tilly, but he takes over the role during school holidays, and when she is involved in events as an organiser for Meningitis Now. Both parents were actively involved in the campaign to find new hands for Tilly.

“When she lost her hands at 15 months, we weren’t sure we wanted her to wear prosthetics. She was scared of the metal arms with hooks issued by the National Health Service. But it would cost 32,000 pounds for a set of functional hands.

“We wondered how we would we raise the money. So we started a campaign, and contacted celebrities to ask if they would just do a hand print or cast or picture. The response was great, and we auctioned these off at events. That was the start of a campaign called Give Tilly a Hand.”

The company that eventually produced her electronic hands, Open Bionics, did not exist back then.

“The founder was doing survey of how we felt as parents of a child who needed prosthetics. Little did we know he would come back 5 years later and say I want Tilly to represent our company.”

Open Bionics is not only about lowering the cost of prosthetics by producing them with 3D printers. It also works with entertainment brands to produce themed arms.

Thanks to a royalty-free agreement with Disney, prosthetics can be based on characters from Iron Man, Frozen and Star Wars. Not surprisingly, Tilly’s hand is even cooler: it is inspired by the cyberpunk computer game Deus Ex.

“You can see she’s living what she does now. Instead of getting the sympathy of ‘Oh sorry, you lost your hands’, it’s ‘Wow, your hands are so cool’. Anyone who faces the same thing can just get in touch with her on social media and give personal feedback and she will put them in touch with Open Bionics.”

Adam knows better than anyone how much technology is changing, and the impact that these changes could have on Tilly.

“I know as a teacher how much tech has changed in 10 years, just from delivering computer science lessons. When I first did it there was one computer in the whole school; now we are all connected. It shows the exponential growth in tech. I have a Chromebook at school, you open it up and you’re connected straight away.

“If Open Bionics can do this in 5 years, the possibilities for the future are infinite. There is no end to where it will go next. Maybe we will just be connected by thoughts. A lot of people worry about robots taking over the world, but our family has a really positive outlook on technology, because we know technology is the future.”

Tilly came close to death, and her survival changed the family in ways they could not imagine as they refused to give up the fight for her life. She was infected by meningitis meningococcal septicaemia strain B, a bacteria for which there was no vaccine back then.

“Sarah saw it happen. The Meningitis rash comes like rain on a pavement. Luckily, she knew what to do and got her to hospital in time for her to have a fighting chance. That was on 21 January 2007. Exactly a year to the day later we had our third child. We didn’t let this disturb our growth a as a family.

“A flyer in the hospital said 9 out of 10 kids survive Meningitis. A nurse said she was at the sicker end of the scale, and was likely to be one of the 1 out of 10 who didn’t make it. We didn’t give up. We just carried on fighting.

“We get asked how sad we are that she lost her hands, but it was just such a relief. Because, instead of potentially having only one child and suffering depression, we had three children and a future. It’s such an inspiring story, and Tilly loves to tell it.

“The whole family works hand in hand. We all help each other. We don’t hide behind her disability. It’s good to be different, because from difference you learn to progress. That’s why we stay so positive.”