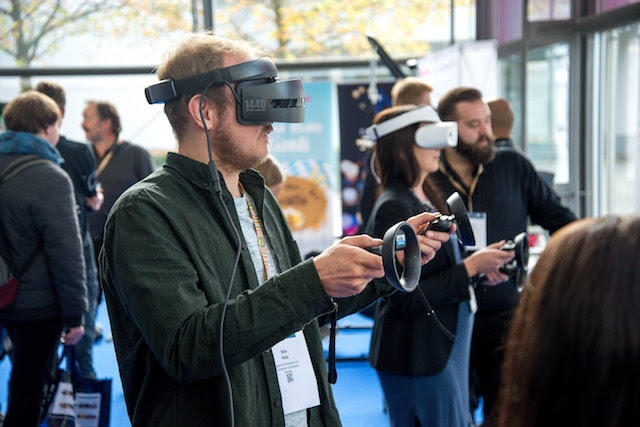 A storyline with emotionally evocative details can reduce virtual reality cybersickness for some people, according to a new study.

Researchers from the University of Waterloo found that storylines that provide context and details can help users feel immersed in VR experiences and can reduce feelings of nausea, disorientation and eye strain, depending on a user’s gaming experience.

“We found that people who had little to no experience playing video games had reduced cybersickness if they received this enhanced narrative, but regular video gamers did not need it because they were not predisposed to feeling symptoms,” said Séamas Weech, a postdoctoral fellow in Kinesiology and a member of Waterloo’s Games Institute. “What that tells us is that the actual design of the VR simulation’s storyline itself can reduce the negative impact some people experience with VR technology.”

The researchers recruited 42 participants from the University, then 156 at a new media technology exhibition in Kitchener, Ontario, and had them experience virtual reality. Before entering the simulation, the participants listened to a story about what they were about to experience, but half were given bare-bones details, and the other half were given an enhanced narrative, which included emotionally evocative details.

All participants who heard the enhanced story reported significantly more “presence” in VR – the feeling of being there – but only the non-gamers experienced reduced cybersickness.

“People with little gaming experience are highly sensitive to conflicts between VR technology and the information they are taking in,” said Michael Barnett-Cowan, a Kinesiology professor and member of the Games Institute. “Enriched narratives seem to enhance presence and reduce cybersickness due to the decreased focus on problems with the multiple inputs to their senses.”

“What’s really striking is that we saw the benefits of enriched narratives across a sample of people from 8 to 60 years of age. This brings us closer to an inclusive way to enhance experiences in virtual reality through game design,” said Sophie Kenny, a postdoctoral researcher at the Games Institute.

Weech, Kenny, and Barnett-Cowan conducted the study with graduate student Markus Lenizky (Kinesiology). The study appears in the International Journal of Human-Computer Studies.

Related Topics:featuredVirtual reality
Up Next