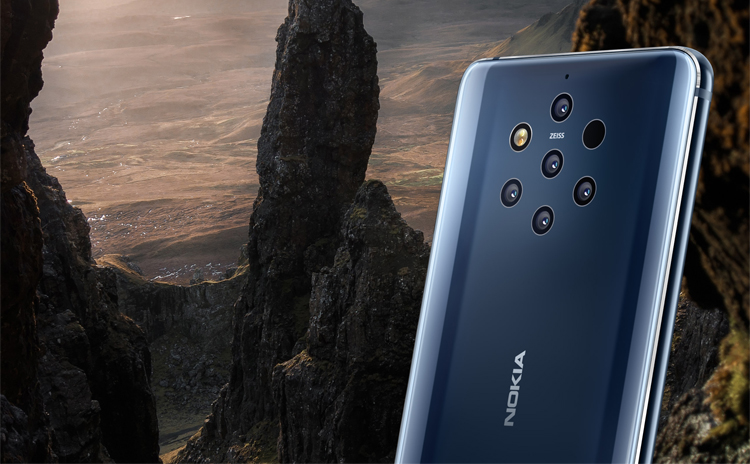 In theory, five lens image blending sounds like an ideal technology but there are some issues that Nokia needs to iron out. When a photo is taken, the device has to combine anywhere between 60MP and 240MP of data into a 12MP photo. This takes its toll on the handset when shooting in burst mode, because it overwhelms the device by forcing it to blend several sets of photos. If a burst shot is taken for longer than 10 seconds, the phone’s performance grinds to a halt while it processes the photos.

It wouldn’t be a 2019 flagship if it didn’t have wireless charging and Qualcomm fast charging. Out of the box, it comes with an 18W fast charger.

Comparing aesthetics to the previous top-of-the-range Nokia device, the Nokia 8 Sirocco, the device is a lot less sharp in one’s hand. The rear-mounted fingerprint sensor has vanished but only aesthetically, as Nokia opted for an in-screen fingerprint sensor. It’s not the most accurate, as Twitter user @decodedpixel found out that the phone can be unlocked with a pack of gum. I suspect it’s more of a software issue than a hardware issue.

The top and back of the phone have microphones, used for Nokia’s OZO audio recording for surround audio experiences, while the bottom of the phone hosts a USB Type-C port and a speaker. Yes, there is no headphone jack, but there is a 3.5mm adapter in the box.

The built-in speaker outperforms expectations of a smartphone speaker, which delivers controlled-bass and clear audio, even at maximum volume.

In comparison to other flagships, this smartphone performs well, as the Snapdragon 845 processor should allow. The power-saving cores shine by showing off an all-day battery life. It also lasts around 7 hours with almost always having the screen on.

When the phone is not using the power-saving cores for sleep or simple apps, the performance cores are used to provide a great gaming experience. The Elder Scrolls: Blades, a very graphically intensive mobile game, performed very well with virtually no lag. This, coupled with amazing audio and a vivid display, delivers an immersive gaming experience that proves this flagship is worth its value.

Android One, a flavour of Android for the consumer who values getting updates first, is Nokia’s operating system of choice. This vanilla flavour of Android is supported by Google, which ensures that all smartphones running Android One receive feature and security updates as they are released. This is a major selling point for Nokia, as users of this smartphone will always be running the latest software without manufacturer bloatware.

At a recommended selling price of R12 000, it enters the flagship space as one of the cheaper flagship smartphones. delivering great value.

Previous Page2 of 2Next Page
Related Topics:featuredNokiaproduct reviewreview
Up Next