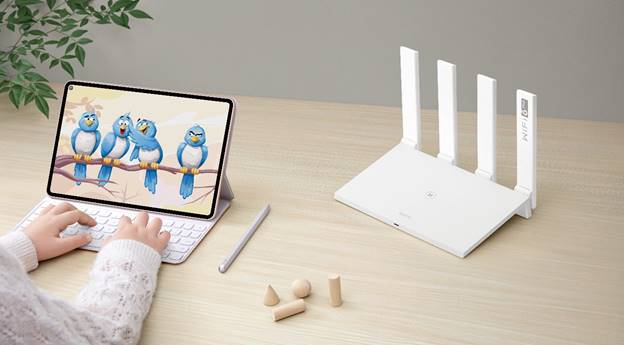 We thought it was important before, but in the Covid-19 era, the need for fast and reliable internet has become completely indispensable. At one point or another, the majority of industries have required employees to work from home, and many parents have had to battle the demands of online learning when schools have been forced to close. Fortunately, the Huawei Wi-Fi 6 AX3 router is here to meet all your connectivity needs.

Huawei’s first Wi-Fi 6 plus wireless router, the Wi-Fi 6 AX3, runs at 3000Mbps, more than two times faster than the Wi-Fi 5. Also, while Wi-Fi 5 routers and devices can only communicate with each other through a 20MHz bandwidth, the Wi-Fi 6 can communicate through bandwidths as low as 2MHz. This means that its strong signal can pass through several walls and provide total coverage, even in large homes.

The Huawei Wi-Fi 6 AX3 also offers superior performance, supporting multiple connections without latency. When many people are trying to attend meetings, meet deadlines, and attend online classes at once – all of which are important – this lack of latency is critical.

If one uses Huawei Share to integrate various Huawei devices, including laptops, smartphones, and smart TVs, they can connect to the Huawei Wi-Fi 6 AX3 and LTE B535 through One Tap Connect. The router also connects with Huawei HomeSec, Huawei’s custom-built security solution.

Of course, all these advantages aren’t only ideal for remote workers and homeschoolers, but also for anyone who enjoys access to glitch-free communication and audio and visual content (which is almost everyone). Gamers are also sure to be wowed with its uninterrupted offering.

A complimentary companion to the Huawei Wi-Fi 6 AX3 is the LTE B535, which is useful for when the fibre is down. This is a 4G LTE router, which gives download speeds of up to 300Mbps.  By connecting the AX3 to the B535, you get an ultimate mesh solution where these two devices act as a single Wi-Fi network. This means there are multiple sources of Wi-Fi around your house, instead of having just a single router that you need to be close to.

For a limited time, one can buy both the Huawei Wi-Fi 6 AX3 Dual Core and the Huawei LTE B535 router at Vodacom on the SmartBroadband 40GB Wireless Package. For R309 x 24 months, one will get both the devices, in addition to 40GB Wireless and 40GB TM data (40GB Anytime + 40GB Night-Surfer). R99 activation fee applies.