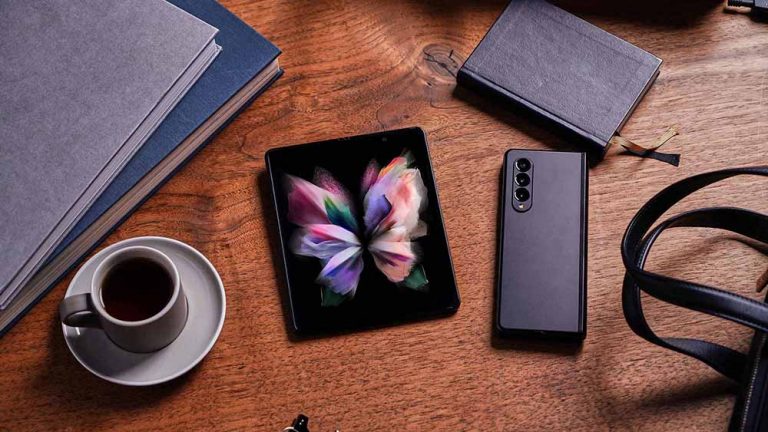 The Samsung Galaxy Z Fold3 is the third generation of the Korean manufacturer’s top-of-the range foldable smartphone. Aimed at the business market, it has a price to match, but is expected to supplant the hugely popular Note series, at least for now. With Samsung not planning to launch a successor to the Note 20 this year, the Fold now has a reason for existence beyond turning heads.

Underlining this role, it is compatible with the S Pen, the near magical stylus that helped the Note become a productivity powerhouse. An S Pen Fold Edition is available as an optional extra, allowing the fold-out screen to be used as a writing pad and a drawing canvas, among other functions that were once the domain of pen and paper. The biggest plus of this edition of the stylus is that it never needs to be charged.

As with its predecessor, the Fold3 has a 6.2-inch cover display and 7.6-inch fold-out screen, and both screens have a 120Hz refresh rate. That makes them more responsive, with smoother video playback and flawless scrolling through apps, images and the like. That also makes it great for gaming, although that’s not going to be a priority for its intended users.

One of the coolest aspects of the fold-out screen is an under-panel camera lens, which makes the lens almost invisible and does not cut a notch into the top of the display. Image quality does tend to suffer a little as a result, since the screen itself becomes an additional layer over the lens.

Improved engineering means it is thinner than the Fold 2 in both folded and unfolded state – the latter a mere 6.4mm, compared to 6.9mm for last year’s edition, partly thanks to an ultra-thin 5nm Snapdragon 888 processor. The 4400mAh battery is optimal for the balance between a thin device and day-long operation.

The cameras don’t shoot the lights out, with a triple-lens 12MPx3 array on the rear, and a 4MP front camera. Memory is decent, with 12GB RAM and 256GB storage.

Running on Android 11, it comes into its own during multitasking, for example when typing a document on one half of the screen while watching a video or visiting a website in the other half. The productivity promise resonates most strongly when using spreadsheets: the size of the display and the functionality of the S Pen makes this function more practical than on, well, any smartphone ever made before.

Starting at of R35,999, its price has come down by a third from the previous edition, bringing it within reach of the top-end of the market.

The initial version of the Fold, launched in 2019, was a disaster, thanks to both a tiny front screen and poor build quality. Samsung made up for it with last year’s second-generation device, but a high pricetag of just under R50,000 meant that high quality was not enough to convince the market. The third generation, the Fold 3, brings it to the top end of the flagship phone market, with a price of R35,999 still high, but comparable to the top-of-the range iPhone, the 12 Pro Max, which costs R32,999.

“We’re specifically targeting small and medium sized enterprises,” says Justin Hume, head of integrated mobility at Samsung South Africa. “We believe that this is a perfect product for the type of diversity of business needs that they have. The entrepreneur needs to have access to both a personal product as well as business product simultaneously.”

Gadget of the Week: Taking tablet to kids’ level

Gadget of the Week: Roomba with a (little) view