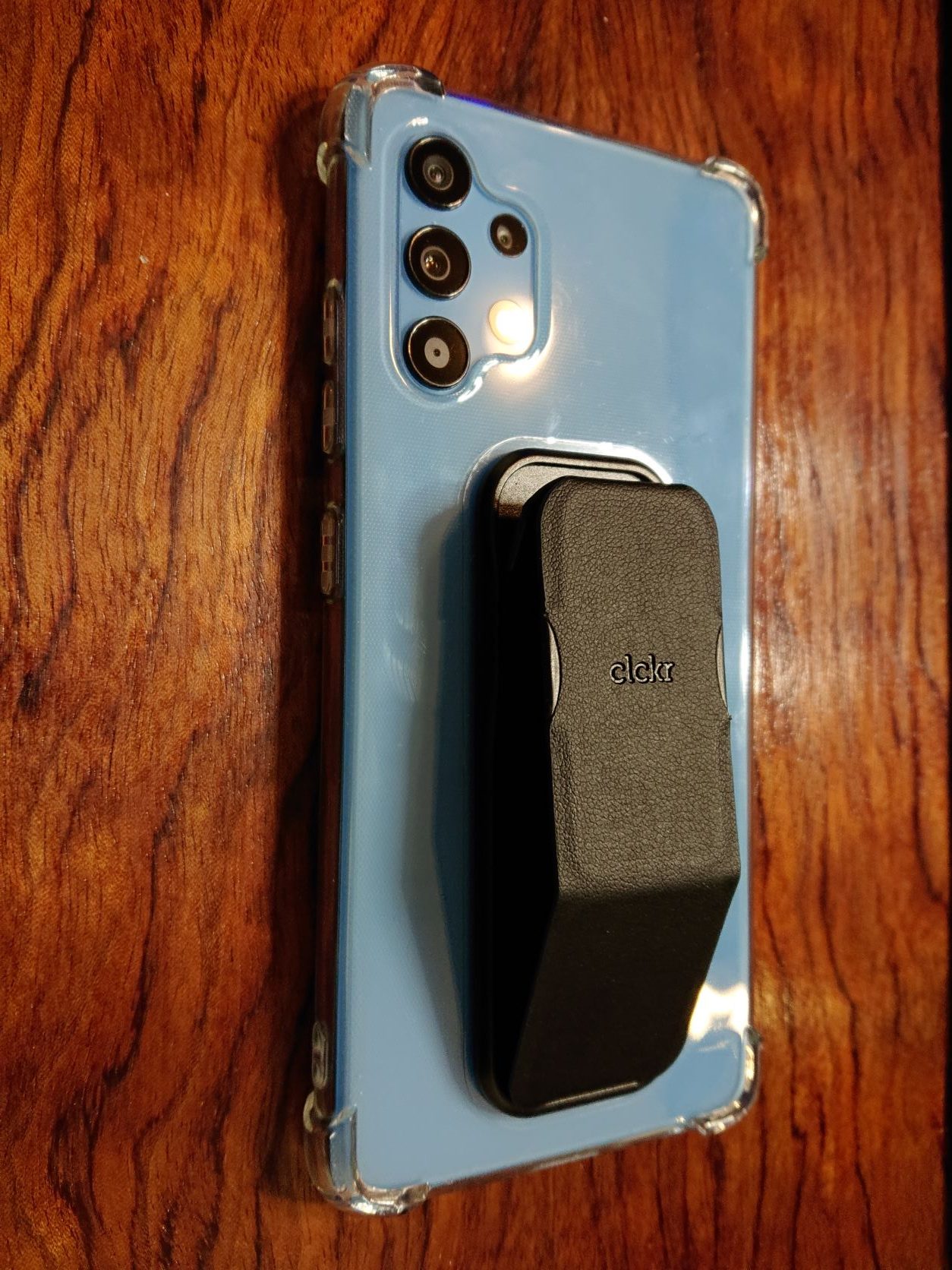 Accessories for the back of smartphones have undergone a rapid transformation. It started with the retractable pop socket, evolved into silicone card holders and, now, the CLCKR. The pop socket faded out of the limelight because it ended up being clunky in one’s pocket, and card holders faded away, thanks to Samsung Pay and Apple Pay.

Enter the CLCKR: a phone holder that’s also a phone stand. Its flat, minimalist design is pocket friendly. The variant we got was a strip of vegan leather that’s reinforced in three places between a thin plastic frame, which all comes together to be a sturdy phone stand – or a nice grip for additional support.

There are variants: glossy, perforated, carbon fibre, diagonal lines, printed pictures, among many others.

In its closed position, the accessory clicks closed and sits near flush to one’s phone. As its name suggests, it clicks into place twice to let users know it has been secured into position.

We put it on a Samsung Galaxy A32, one of the largest devices we have available, and the accessory performed superbly. The grip is excellent for typing out long emails while making sure the attached smartphone remains safely in one’s hands.

When the device is out of your hands, it still performs. We put up a cooking video while making dinner, and propped the phone up horizontally in stand mode. Then, during meal prep, we rotated the device upright to answer a Google Duo video call. In both orientations, the CLCKR held the device sturdy.

We have been using the accessory for around a month now, and there are no signs of wear with repeated daily usage. Most of the time, it’s set to stand mode so the smartphone is propped up on a desk during a workday.

There’s no worrying about whether this accessory sticks: we had to use a tremendous amount of force to pull it off of the phone’s case. For those brave enough to forgo phone cases, it comes with an additional plastic film that one sticks to the back of one’s phone first, so the CLCKR’s removal can be safe. This is great foresight for those with glass-backed smartphones.

Getting the real deal is worth it because of the proven strong design and strong adhesion that won’t break your device. At R249, it’s a no-brainer to get a genuine CLCKR. For more information, visit: https://www.clckr.com/ and purchase the accessory from Takealot.

Continue Reading
You may also like...
Related Topics:featured, gadget of the week

Gadget of the Week: Making a Moov on smart accessories
Taking the pulse of insurance