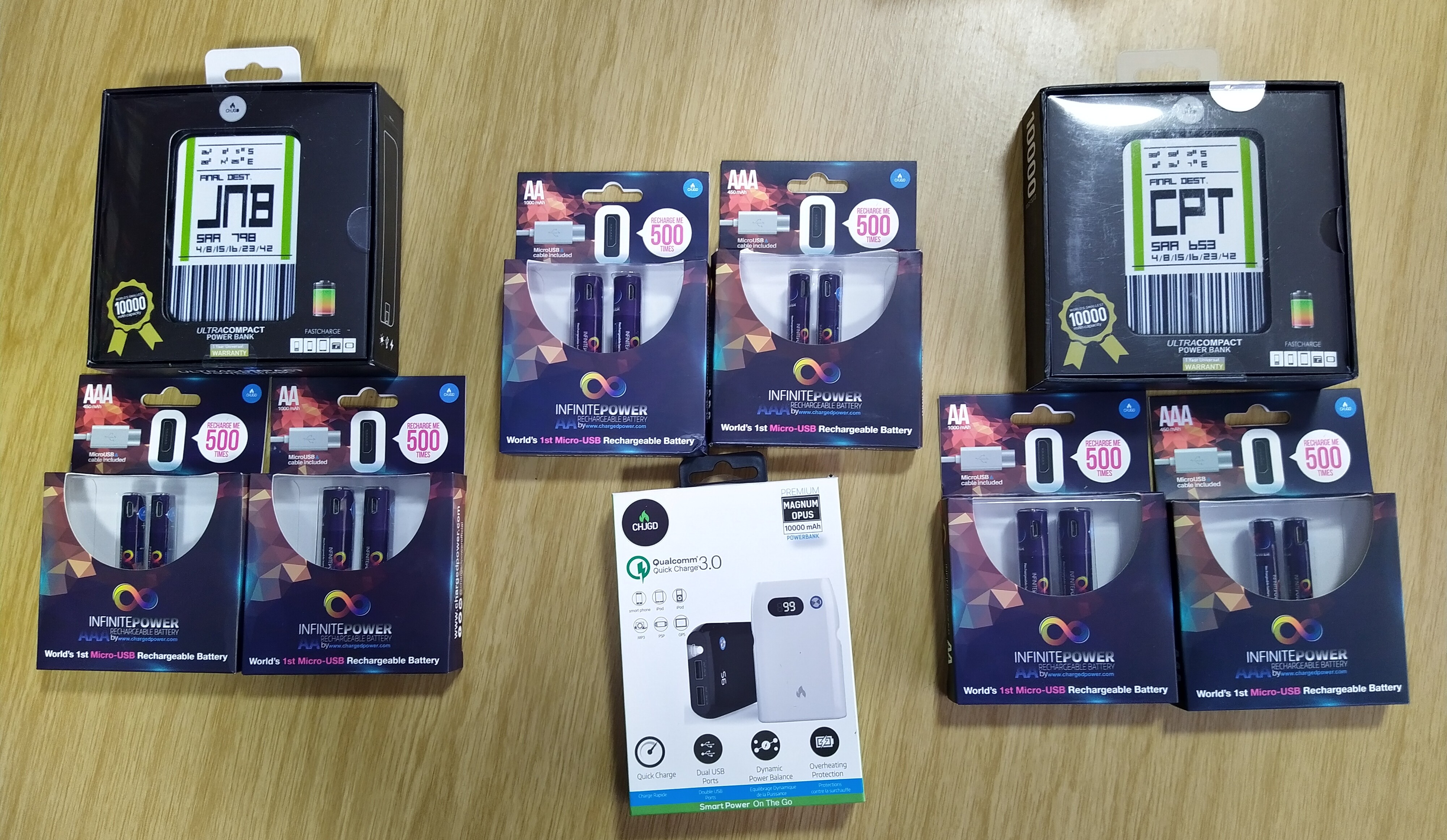 From wet coal to power station sabotage at Eskom, South Africa’s power utility has been turning the consumer’s lights off at odd times. It’s especially inconvenient when torch batteries and power banks are going flat. Enter Charged Power. The combo between its high-capacity power banks and USB rechargeable AA and AAA batteries make it very convenient to keep the lights on even when the lights are out.

The powerbanks are branded CHJGD, with two ranges, namely high capacity units called Premium Magnum Opus, and the lighter Ultra Compact units, all in a small form-factor. The power banks range from 21000mAh with Qualcomm Quick Charge 3.0 support – meaning fast charging of compatible smartphones – to 5000mAh power banks that can charge most phones a couple of times.

CHJGD Premium Magnum Opus includes two types of high-performance powerbanks, one with 21000mAh capacity and the other with 10000mAh. Both  support Qualcomm Quick Charge 3.0, which allows smartphones using the Qualcomm Quick Charge chip to be charged up to 80% in 35 minutes, compared to regular chargers getting to 20% in that time. The powerbanks feature LCD screens that show how much battery they have left as a percentage, and LED lights that act as torches. Dual USB ports allow two devices to be charged at the same time, and the units include overheating protection.

The CHJGD Ultra Compact range come in a much smaller form factor that’s much lighter. They come in 10000mAh and 5000mAh variants, and feature cool designs like airplane boarding passes, traditional South African patterns, and Ferrari imagery. They also feature fast charging at 2.1A, and a four-LED battery indicator. USB cables are included for micro USB devices, as well as an adapter for newer iPhone and iPad devices. They also feature short-circuit and high temperature protection.

For battery powered devices, Charged Power offers the Infinite Power range of AA and AAA USB-rechargeable batteries. These can be used in torches, toys, and remote controls, among many other gadgets. They make use of Micro-USB ports directly on the batteries to recharge, meaning no proprietary chargers are needed for these batteries. They can be recharged up to 500 times, making them some of the most affordable batteries in the long run.

They come in AA and AAA variants, which are 1000 mAh and 450 mAh respectively per battery. The batteries also feature a soft button, which indicate charge level. From flat, they take around 5,5 hours to charge. They last depending on the device in which they are used. Remotes may last for months, while toys that draw a lot of power may last a few days.

The best part is the batteries can be used with the power banks, meaning if there’s no power for a while, torch batteries can remain charged.

To bring the power to the people, Charged Power has provided Gadget with 3 bundles of power banks and USB-rechargeable batteries. The bundles include Infinite Power batteries, one AA and one AAA set, and a 10000mAh power bank from the Premium Magnum Opus range or Ultra Compact range.

To stand a chance of winning this set, follow us on Twitter on @GadgetZA, follow Charged Power on @ChargedPower, and answer a simple question about the names of the power banks and USB-rechargeable batteries.

Netflix goes into overdrive in SA