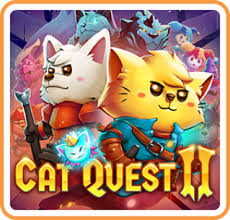 After enchanting PC players earlier this month, when Cat Quest II earned a 95% Very Pawsitive rating on Steam, the adorable catventure can now begin on consoles.

Under threat from a continuing war between the cats of Felingard and the advancing dogs of the Lupus Empire, Cat Quest II tells the tale of two kings, brought together against their will, on a journey of paw-some discovery to reclaim their thrones.

Play as either a cat or dog to explore their kingdoms solo, or with a friend. Quest in a world filled with magic, curious monsters, and go on a catventure.

The game has the following features:

1. A new kingdom to explore

Vast deserts, towering rocks and auburn meadows: the Lupus Empire is just as beautiful, unique and full of quests as its neighboring feline land. Catventure through this chequered realm, join forces with new allies and help liberate it from its emperor-gone-mad: Wolfen.

One of the most requested features following the success of Cat Quest and perfect for friends, families, couples and everyone else! Enjoy optional local 2-player co-op as an unlikely pair of heroes and join furces.

What would an adventure be without some sweet loot? Cat Quest II offers even more diversity by adding new weapon types – like ranged wands – and spells as well as passive skills on armour pieces you find and upgrade during quests.

The game is available now on PlayStation 4, Xbox One, Nintendo Switch, and PC.

Sims 4 goes back to school