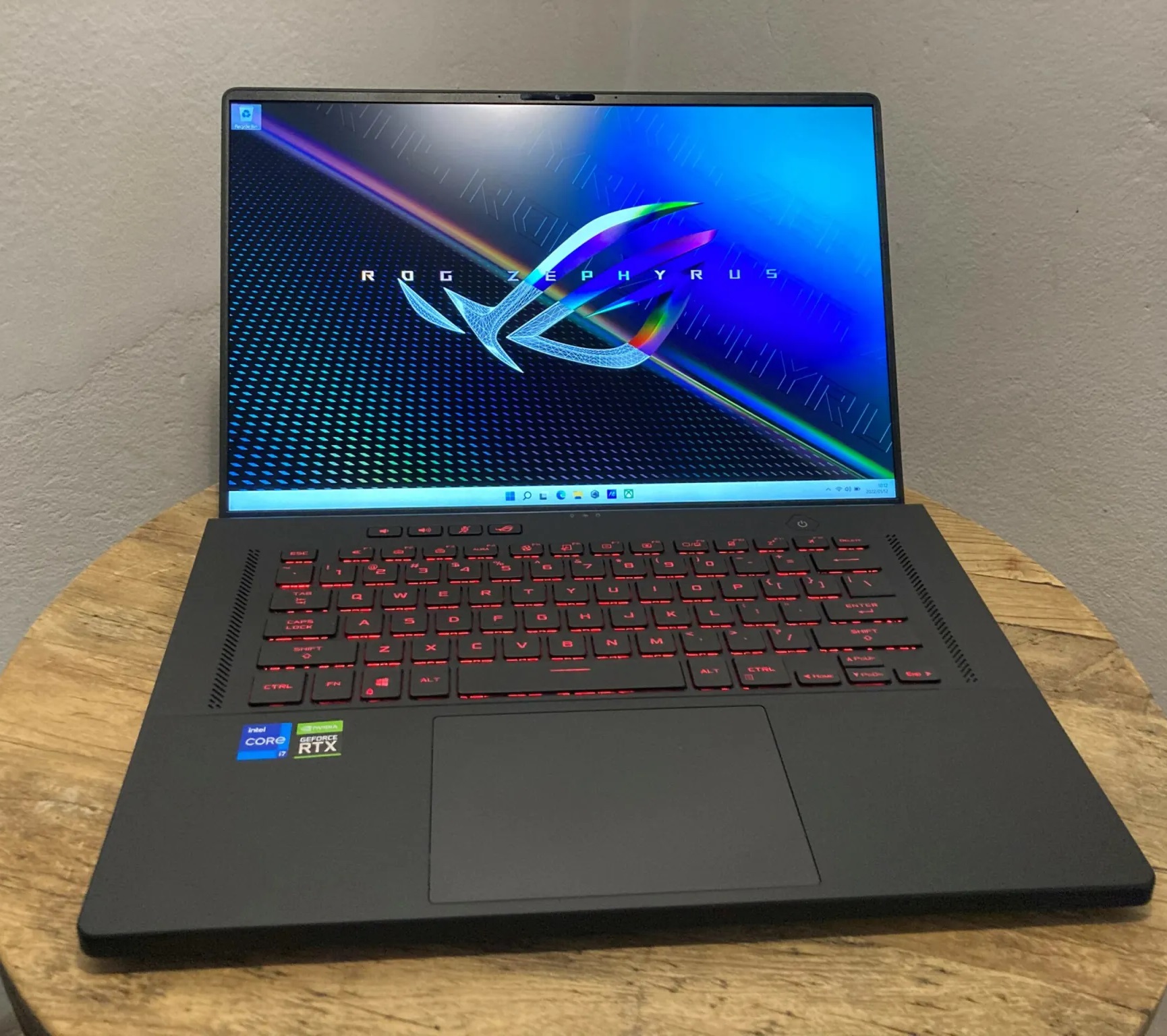 Asus is staying ahead of the market as the line between gamer and content creator continues to blur. The Asus ROG Zephyrus M16 is the brand’s first 16” screen in a 16” form factor, which may not sound like a big deal, but becomes one for those who need more screen real estate for multitasking.

The lid of the laptop shimmers with colours before one turns it on. This is the Prismatic Film underneath CNC machined holes, giving it that multicolour effect. It’s similar to the AniMe Matrix LED system on the Zephyrus G14, but not powered or customisable. The bottom left features the small ROG badge, which asserts the gaming brand, while being elegant. The underside has two long rubber strips which serve to prop the device up and keep airflow consistent.

It offers the latest connectivity, most notably Thunderbolt 4 via one of its USB-C ports. The other USB-C port offers USB 3.2 Gen 2 and this is also the port that supports Power Delivery charging. In a pinch, one could charge the device up while it sleeps, with a 50W smartphone charger, but it would take a while. Nonetheless, options are always good. The other connectivity options are standard for gaming laptops in this price range: gigabit Ethernet, HDMI 2.0b, headphone-mic combo jack, microSD card slot, and two more USB-A 3.2 ports.

The magic happens when opening this laptop for the first time. The 16”, 2500 x 1600 resolution display has thin bezels and a 165Hz response rate. The aspect ratio is a huge win, since it allows the computer to have a 16” panel in a body that’s not much bigger than other 15” laptops.

The computer defaults to Intel UHD graphics to conserve its 90WH battery when away from mains power, and the power is unleashed when playing with the Nvidia GeForce RTX 3070 graphics. Our tests revealed the graphics card causes the device to heat up quite a bit, so keeping it on the 240W adapter is recommended for intensive applications.

The octa-core 11th Gen Intel Core i7 processor is fast enough to handle multitasking and processing video editing tasks. The combo between the processor and graphics make this machine powerful for both gaming and content creation, and in most cases, both at the same time.

Our unit featured 16GB of RAM, but it can be increased to 48GB if needed. For gaming streaming, the base configuration is more than enough. It has a large 1TB PCIe 4 NVMe SSD, which significantly reduces loading times in games. It also helps content creators move large files to and from their internal storage much faster.

Nvidia DLSS, which is the company’s deep learning neural network that makes games smoother and generates sharper images for games, is available on this machine. This technology saved the day with benchmarks: Cyberpunk 2077 scored around 28 frames per second (fps) on the highest graphics settings, and a whopping 64 fps with DLSS turned on. It wouldn’t be a Gadget review without a Shadow of the Tomb Raider benchmark, which scored 75 fps on maximum graphics. This puts it 15 fps behind the ROG Strix G17, most likely due to the Ryzen 9 chip in the system.

Overall, the Asus ROG Zephyrus M16 is a fantastic option for those who need powerful mobile gaming and content creation. The laptop retails from R48,092 on Wootware.

Continue Reading
You may also like...
Related Topics:Asus, product of the day, product review