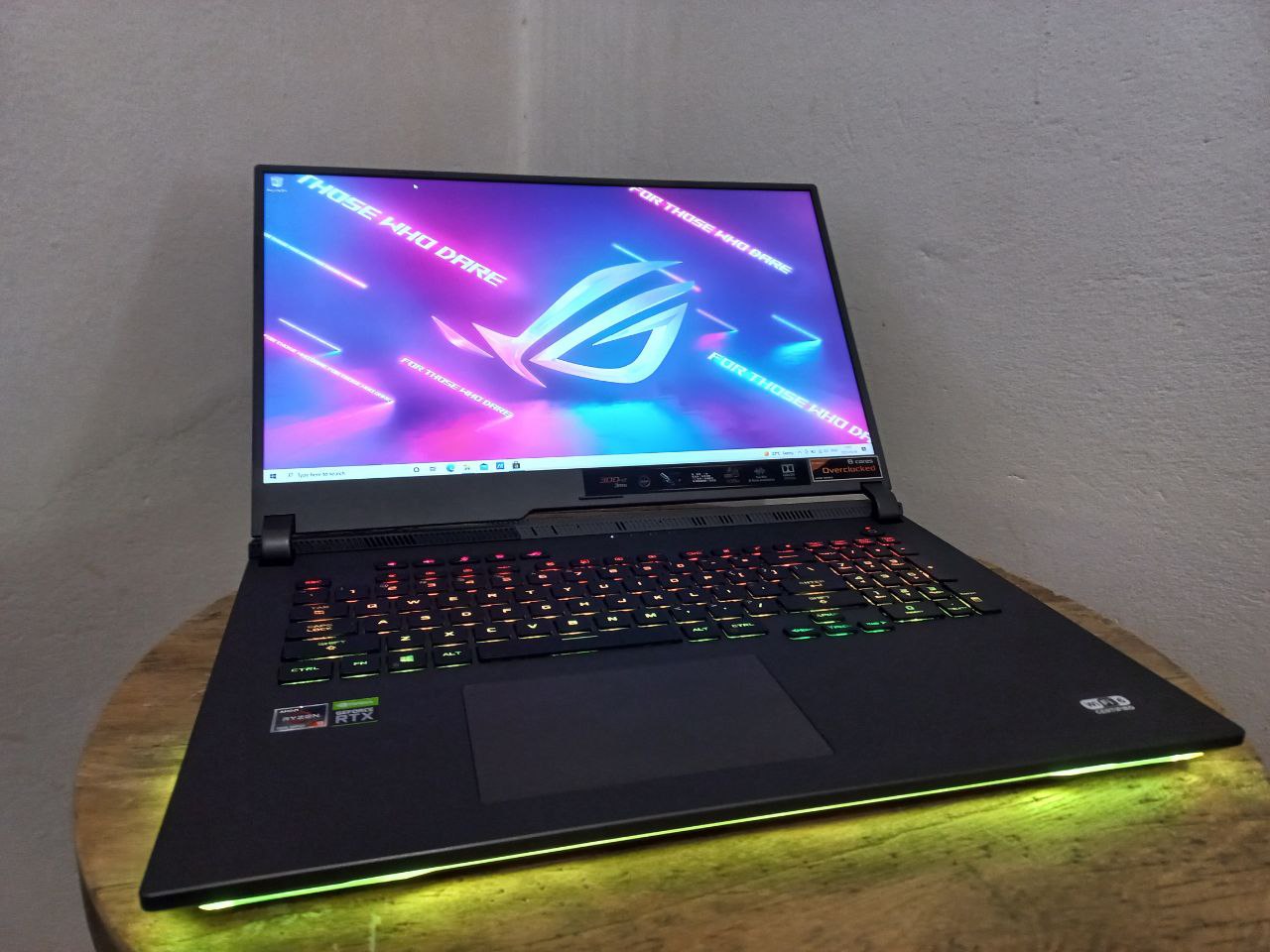 Asus’s 2021 ROG Strix G17 is built solely for gamers. One can see this from the design choices, running all the way through to the desktop-equivalent components found in the device. This laptop makes it far more appealing to ditch the gaming desktop setup, in favour of its equally-powerful gaming laptop equivalent.

On opening the laptop’s lid, one finds a thin-bezelled screen reaching from edge to edge, with a chin on the bottom of the panel. Lower down, a large, full-sized keyboard with numpad sits alongside a large multitouch trackpad.

The computer provides all the ports one would expect from a gaming laptop, namely: one USB Type-C, three USB 3.2 Type-A, HDMI 2.0, Gigabit Ethernet, and a 3.5mm headphone jack. The port placement is also great for cable management, with most “clutter” cables, like the charging port, USB-C, HDMI, and Ethernet, hidden around the back of the device. The remaining three Type-A USB ports and headphone jack are on the left side of the device, with the right of the device having no ports. It becomes immediately apparent why Asus decided no cables should be hanging out the right side, as most gamers put a mouse to the right of their keyboards.

With serious specs, one would expect some serious weight, but this laptop remains relatively light at 2.7kg, compared to other gaming laptops in its class. While the computer is on, lights shine on the underside of the chassis, which match the colour of the keyboard’s lights – a great design touch. Out of the box, everything is red, but users can configure the laptop with whichever colour they would prefer.

The panel is where this device comes into its own. It has a large 17.3”, 1080 x 1920 resolution, 3ms response rate, IPS display, that’s vivid and great from various viewing angles. Apart from it being large, bright and colour-rich, it has an extremely high 300Hz refresh rate for the smoothest gameplay. 300Hz refresh rate technology is unaffordable in most desktop monitors today, so it’s surprising to find it in a sub-R50,000 laptop.

With great visuals comes great sound – built-in speakers in front of and behind the display provide a surround sound experience while gaming or watching supported content.

The processor and graphics combo makes this computer shine. It features an AMD Ryzen 9 5900HX CPU at 3.3GHz, alongside Nvidia GeForce RTX 3070 8GB graphics. This combination helps the computer achieve 300 fps (frames per second) gameplay to complement the 300Hz display. We played several games to test frame rates and, on most, it easily reached over 250 fps, except for one outlier. Shadow of the Tomb Raider, one of the most taxing games on most systems, sustained around 90fps on maximum graphics settings, and achieved around 135fps when dropping the graphics to medium.

Content creators will be running a lot more in the background than only their game, so multitasking while gaming was also tested. Alongside Fortnite at Ultra settings, we ran OBS Studio (encoding video over the Nvidia graphics) for streaming to Twitch and recording locally, Discord for communication, and Chatterino for livestream chat control. We grabbed this clip from Twitch, which showed a smooth output despite all the programs running in the background:

When taking this device out and about, it has Wi-Fi 6 and Bluetooth 5.1 to keep online multiplayer games going. For home use and LAN parties, Gigabit Ethernet supports ultra-fast internet connectivity.

Overall, the Asus ROG Strix G17 is one of the most powerful gaming laptops we have encountered. The device starts at R44,999 from Evetech.

Gadget of the Week: Tecno makes Pro move in SA