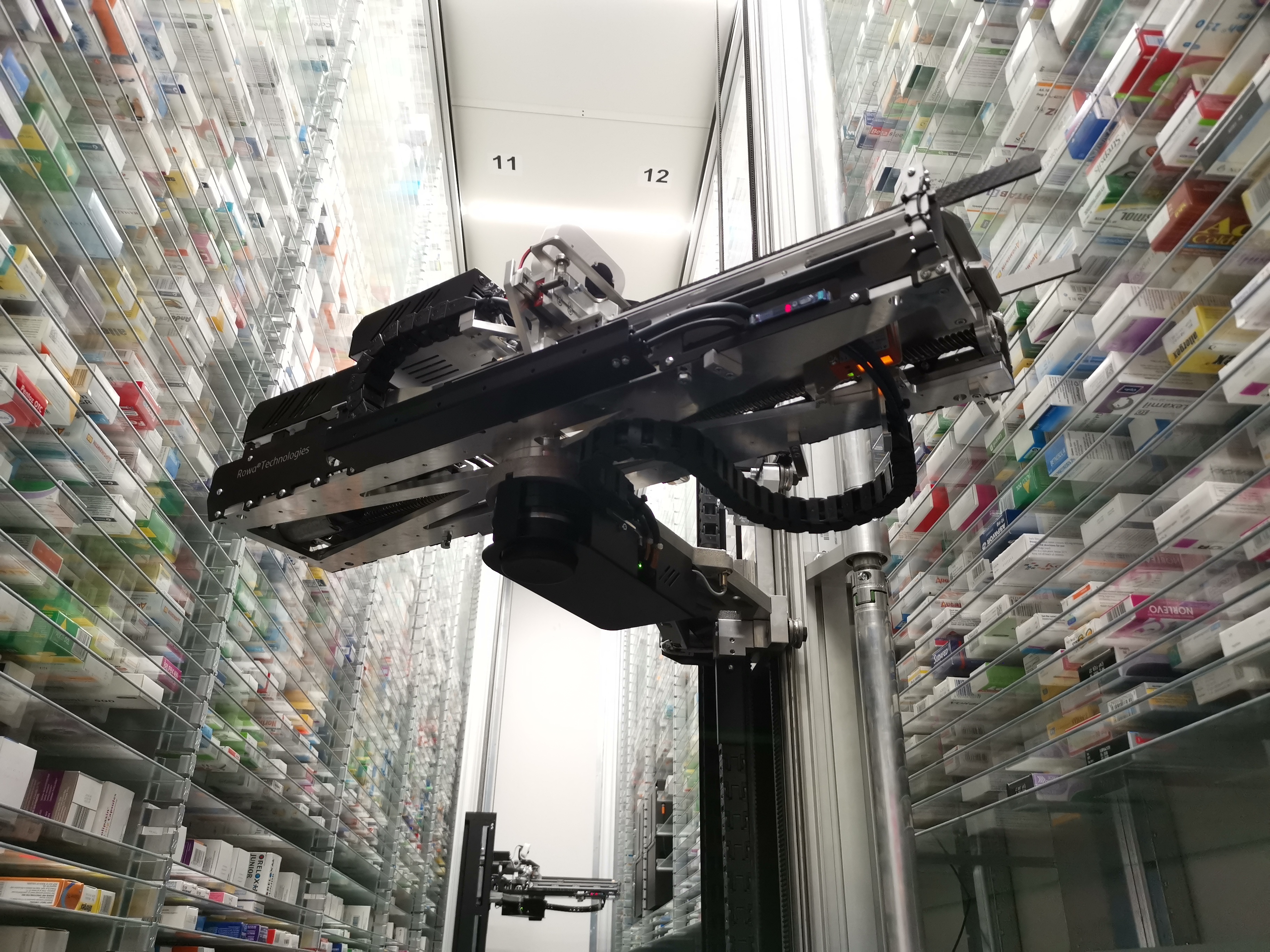 Rowena the robot arm in action at Morningside Dispensary. Pic by Arthur Goldstuck

It looks like an ordinary pharmacy in an ordinary Johannesburg shopping mall. But behind the scenes at the Morningside Dispensary, a revolution is underway. It may not be getting the attention that politicians get when they talk of the fourth industrial revolution, but it is a real and practical example of what emerging technologies make possible in everyday life.

It doesn’t have a face or a cute voice: it’s a mere set of robot arms that manages the stocking and dispensing of medicines. The staff have given it a name, though: Rowena, after its creator, Rowa Technologies.

When a customer walks in, the pharmacist keys in the name of the medicine on a prescription, and Rowa is able to find it instantly – among 20,000 boxes of medicine. That means the pharmacist can carry on speaking to the customer while Rowena does the heavy lifting – or rather light lifting – and delivers the box of medicine into a basket behind the staff member. This means, in short, that the robot allows the human to be more human.

It is a perfect example of robots enhancing and augmenting human activity, rather than replacing human roles. The customer is served more quickly, even as the pharmacist engages more deeply with the person across the counter. That makes the business as a whole more efficient, but also more human.  Rowena also restocks the shelves, assisted by a conveyor belt and barcode scanner.

In the industry, they call Rowena an ADU, for automated dispensing unit. The first one on South Africa was installed in 2012 at the Pretoria Urology Hospital, now legendary for using robots to assist surgeons in operations.

“ADUs like the Rowa have been around since 1996,” says Jared Paiva, sales manager of DNA Logic, Rowa distributors in South Africa. “The first unit was installed in Germany, and have been demonstrated in South Africa since 2008.”

He points out that robots are symbolic of digital technology making its way into pharmacies, with tools ranging from touch screens to ATM pick-up units.

“All of these are tools for business to improve service, offer value and convenience to customers and create efficiencies for staff. ADUs solve many problems experienced in a pharmacy, such as staff shortages, long waiting times, stock theft, stock shrinkages, space problems.”

While Europe and rest of the world took to the technology immediately, with over 10,000 Rowa machines sold in 33 countries, he says, it is still a tough sell in South Africa, with 18 units installed.

“That’s a good number considering how tough the economy has been. All 18 of our customers have seen the benefit of a Rowa almost immediately and have wished they adopted the technology earlier.”

It is no surprise that service providers are emerging to take advantage of these technologies, trends and opportunities. Right ePharmacy, a “strategic solution provider for the dispensing, distribution and collection of medicine” has introduced South Africa to the PDU, an ATM using electronic and robotic technology to dispense medication. It is managed from the cloud, using Amazon Web Services (AWS) to take advantage of new capabilities and capacity as they are needed.

“The cloud-based information system hosts and manages patient data and links the patient to a remote pharmacist via an audio-video link,” says Fanie Hendrieksz, managing director of Right ePharmacy. “This virtual consultation between the patient and the pharmacist is called tele-pharmacy.

“Through AWS cloud, we were also able to implement a SMS system to keep users informed about their next collection dates and sends out reminders. This promotes patient retention and assists the early identification and intervention for patients at risk of non-adherence. The system results in positive clinical outcomes and effective patient data management.”

PDU collection sites can be placed in communities at central, easily accessible locations, such as shopping centres on main transport routes. They can be kept open for extended hours, including weekends and public holidays, and patients can quickly and conveniently collect their repeat prescriptions.

Right ePharmacy isn’t just a great commercial idea. Its partners and funders include local and international agencies and teams committed to the prevention care and treatment of HIV, TB, cervical cancer, and associated diseases.

Says Hendrieksz: “Right ePharmacy is the centre of excellence for its parent company, Right to Care, spearheading disruptive innovation and enhancing differentiated models of pharmaceutical care in South Africa. We source, customise and implement the latest technology and systems to address key issues for better healthcare outcomes.

“The use of this pharmacy automation technology enhances delivery and access to medication services, eases overcrowding at facilities with high patient volumes, reduces patient waiting times and has the potential to improve medicine adherence and retention in care. Wider economic benefits are also achieved through minimising time off from work for employed PDU users.”

In effect, Right ePharmacy is bringing to the public sector the benefits of the fourth industrial revolution that companies like DNA Logic offer the private sector.

“PDUs are primarily used to dispense chronic medication to patients, but they can be customised and utilised for specific programmes such as universal test and treat or malaria campaigns,” says Hendrieksz. “Right ePharmacy is the ideal partner for any form of key health initiatives such as treatment access scale-up. The solutions also help to further address some of the structural issues in the public health sector, like inadequate skills and human resources.

“We pioneered the customisation and installation of the first Pharmacy Automation Robotics system in the public sector. Currently we have automated three hospital dispensaries with robotics in overburdened facilities.”

Clearly, the pharmacy of the future will be a case study in how robots come to the rescue of humans, rather than replacing them.

Click here to read about how Rowena can soon come to a pharmacy near you.

Previous Page1 of 2Next Page
Related Topics:featuredGoldstuck on Gadgets
Up Next