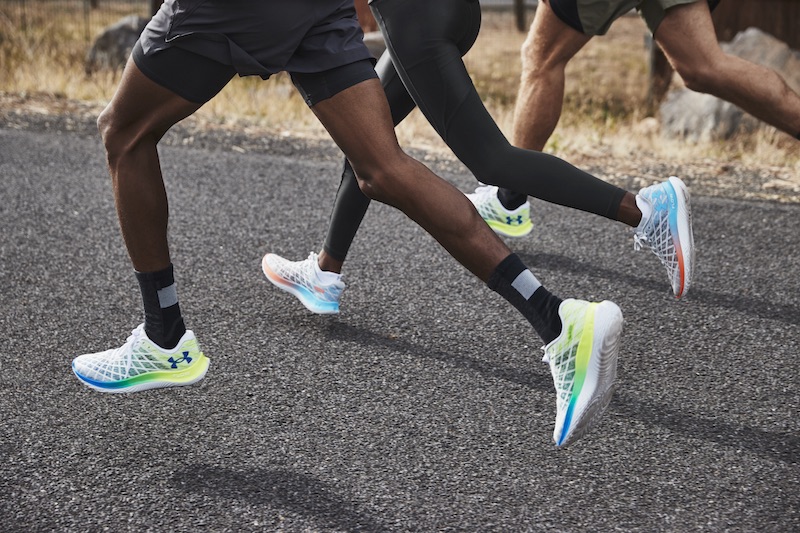 Just when we thought that running shoes made of recycled material were the ultimate in fitness high-tech, Under Armour (UA) has raised the bar again.

Last time round we looked at the Adidas Solarglide 5 and its impact on both one’s feet and the planet. One of the questions it raised was whether environmental impact could be more readily reduced by using less material.

The new UA Flow Velociti Wind 2 could be seen as an answer to that question. But it is also an example of how less can be so much more.

The shoe has a brief but dramatic legacy: it is the successor to the 2021 Flow, which was the first UA shoe to eliminate the need for a heavy rubber outsole. Its lightweight construction removes a 56g to 85g weight a rubber sole would typically add to a traditional running shoe. Considering my size 9s weigh 236g, that’s a massive proportion of weight off my feet.

The 2nd edition uses the same all-in-one cushioning system that not only does away with rubber on the outsole, but further reduces the weight of the shoe, making for an ultra-responsive and long-lasting midsole.

On my feet, it felt so light, it was almost non-existent. This provided a greater sense of light and effortless speed. UA calls it “the feeling of the wind at your back” but that’s something a shoe cannot provide – yet. It is designed for speed over longer distances, as well as being a longer-lasting shoe.

The energy return one expects from high-end shoes is palpable, literally adding a bounce to one’s step. The “grippy traction” promised for the soles is also delivered, helped along by another innovation in the 2nd edition: the Tatami Stitch Heel: a solution that promises a more consistent lockdown around the heel, supported by a moulded EVA (ethylene vinyl acetate, a rubber-like plastic) sockliner, which gives more cushioning.

What about the part that goes over the foot? Yes, more high-tech:  the upper solution uses proprietary UA Warp technology, which adapts to the runner’s foot during strides. The way UA describes its supporting tapes is “like seatbelts on the foot”, which are placed where biomechanists found them to be most helpful for a runner.

“The tapes are in tension when you need them and relax when you don’t — eliminating any buckling and pinch points from traditional uppers built with continuous materials,” says UA, summing up another fundamental difference between these and regular running shoes.

This means that the UA Warp upper moves in unison with the foot, improving both efficiency and performance. In short, it is about the most natural way a foot can move while enclosed in a shoe. This makes it an ideal shoe for running longer distances.

Of course, as with all high-tech shoes from UA, a chip in the shoe connects it to the MapMyRun app on a smartphone. The handset need not be carried on the run: the chip stores data about the run, which uploads once the device is close enough to sync. The app then analyses one’s running metrics, and offers advice to improve performance.

An eye-watering R3,499, from UA stores and underarmour.co.za.

The shoe is a product of the UA Innovation Lab in Baltimore and UA Human Performance Center in Portland, a combination that allows Under Armour to develop shoes based on insights and learnings from years of experience and research. That means we will continue to see new and even disruptive tech going into footwear.

Continue Reading
You may also like...
Related Topics:featured, under armour

My robot assistant
Give your Wi-Fi wings