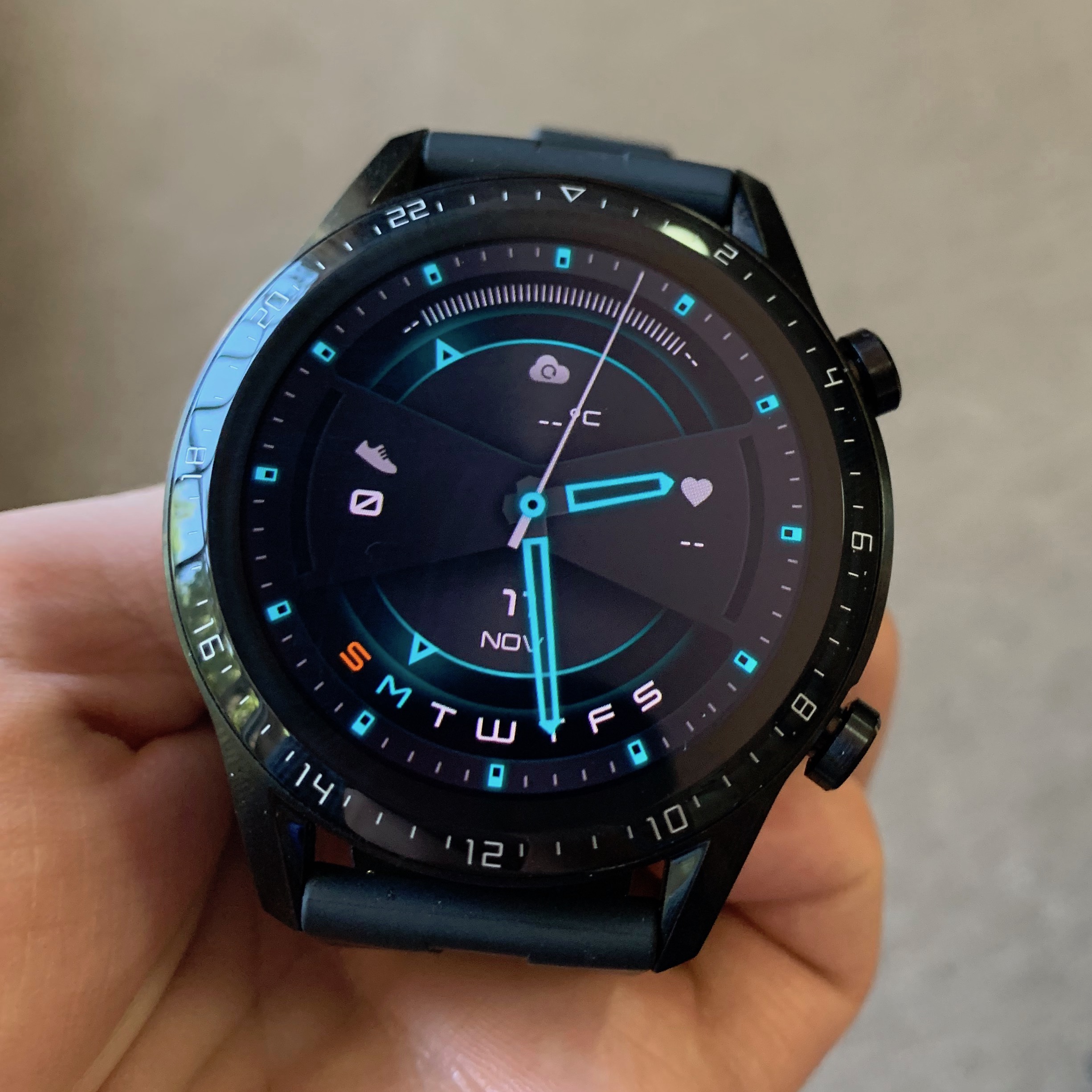 One of the most beautiful smartwatches yet has entered the arena: the Huawei Watch GT 2. It features a vibrant and sharp AMOLED display and some of the best battery life on the market for backlit colour screen smartwatches.

We tested the Watch GT 2 for two weeks, which happens to be just the right amount of time to review this device on one charge. Its major selling point is 2 weeks battery life, and it surpassed that mark for us – although we didn’t use every single feature every single day, as Huawei suggests, for the 2-week battery life.

Out the box, the watch is presented in a premium foam housing, while the disc-shaped charger and larger straps are neatly hidden. The charger has two metal contacts that line up with the bottom of the watch, so it’s not wireless, but is still pretty sleek. The charging-disc also features a USB Type-C port, so only one cable is needed between the latest Android handsets and this watch.

When turning it on, the first striking detail of this watch is its stunning AMOLED display, which is super bright – making it ideal for outdoor runs in full sun.

The display is also pretty big, at 46mm at 454×454 pixels, while not feeling like a bulky display on one’s wrist. The bezel doesn’t rotate, but at least it looks good and doesn’t get in the way of operating the watch.

Two buttons on the right side of the watch work in-tandem with taps and swipes. It does take some getting used to, because the top button is supposed to be a back button but sometimes takes the user completely out of the app. The bottom button is customisable but launches workout mode by default.

The device pairs with the Huawei Health app, which is available on both Android and iOS. The setup process is far easier on Android than iOS. On a non-Huawei Android phone, one must download Huawei Health and also get Huawei Mobile Services (HMS). On iOS, only Huawei Health is required, but not without head-scratching as to why it won’t pair on the first few attempts.

Once it’s paired, it’s smooth sailing. It makes use of Bluetooth 5.1, which keeps the watch connected with virtually no power consumption. This, combined with the super-efficient Kirin A1 chip, gave us over 2 weeks of battery life with regular use – which consisted of checking the time occasionally, with a 30-minute workout a day.

The watch is packed with a bunch of sensors ideal for the fitness-minded user who wants to know as much as possible about their workout. These include an always-on heart rate sensor, gyroscope, GPS, accelerometer, and an air pressure sensor for elevation detection.

It features 16 common workout modes for tracking users, including GPS-tracked outdoor running, cycling, open water swimming, using a rowing machine and an elliptical. Although Fitbit and Apple Watch have far more workout modes built-in – like yoga or boxing – the less niche fitness user will be fine with the Watch GT 2.

One of the nicest features for runners is the music sync functionality. The watch can pair to wireless earphones, and one can go for a run without taking a smartphone along. It can also store around 500 songs. The only catch: it’s MP3s only, like it’s 2002. Huawei will likely add third-party streaming services like Deezer and Spotify to the watch, though nothing has been confirmed yet.

Answering calls on the Watch GT 2 is also now possible. While it’s useful to talk to one’s watch like James Bond when one’s phone is nowhere to be found, it’s pretty gimmicky and gets old quickly on any smartwatch.

There are some pretty limiting features for iOS users. The watch comes preloaded with 14 watch faces but, if you want more, you’ll have to pair to an Android phone – Huawei Health for iOS doesn’t do that. Pairing a headset to the device is possible, but only through an Android phone with Huawei Health. In short, iPhone users are better off sticking to Fitbit or Apple Watch.

That said, it hits the nail on the head for a beautiful fitness-style crossover.

The Huawei Watch GT 2 retails for R4,999 at Total Sports.