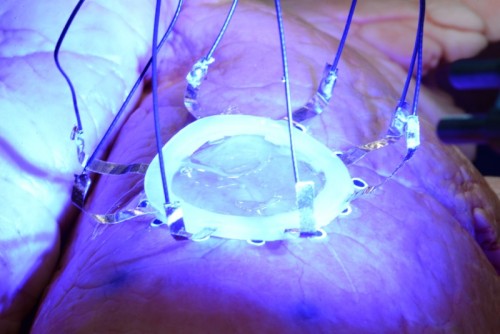 A new technique funded by NIBIB and developed by University of Minnesota researchers allows 3D printing of hydrogel-based sensors directly on the surface of organs, such as lungs—even as they expand and contract. The technology was developed to support robot-assisted medical treatments.

“Along with a robot’s ability to assist a surgeon removing a tumor from a lung, for example, this technology could 3D print a sensor onto the surface of the lung to monitor how well it functions during and following the procedure,” says McAlpine.

The researchers expect the breakthrough technology to facilitate 3D printing of various functional devices “on and inside human bodies.” Examples include electrode arrays that interface with the nervous system to treat pain, bioscaffolds with engineered cells that can regenerate tissues, and efficient and accurate application of surgical glues and skin grafts.

“McAlpine and colleagues continue to advance the biomedical applications of 3D printing,” says Michael Wolfson, Ph.D., director of the NIBIB Program in Bionic and Robotic Systems. “They consistently identify biomedical problems in need of technological solutions and then design and build sophisticated systems to meet the need. And since this research isn’t only about innovative engineering, they also demonstrate that the technology works in realistic biological systems.”

A key to making the technology work was the use of motion capture technology, which is similar to that used in films and video games. Moviemakers use the technique to track moving elements in a scene to seamlessly insert special effects, or on actors to convert them to CGI characters. That type of “closed loop” tracking enabled addition of a new degree of freedom in 3D-printing—successfully printing a sensor onto an expanding biological surface without damaging the organ.

After fine-tuning the new system on a balloon as it was inflated and deflated, the team moved on to printing on an animal lung in the lab as it was rhythmically pulsed with air to simulate breathing. A special hydrogel embedded with electrodes around its perimeter was printed to form an electrical impedance tomography (EIT) sensor map. The device is able to stretch with the movement of the surface it is on, such as when lungs are breathing in and out—movement that the sensor can electronically relay for real-time tracking of the strain on the lung surface as it expands and contracts.

“Measuring the lung’s flexibility with the EIT sensor is just one example of remotely measuring  the health of an organ using a sensor printed onto its surface,” says McAlpine. “We envision developing different types of sensors that could be adapted to different organs, such as a sensor printed on a human heart to monitor cardiac function.”

The technology could also be a useful tool in caring for COVID-19 patients. “We are beginning to learn a lot about the lasting effects of COVID-19 on the human body,” says McAlpine. “A technology like this could be used to monitor changes in respiratory function during and after coronavirus infection.”

The study was reported in the Science Advances journal.