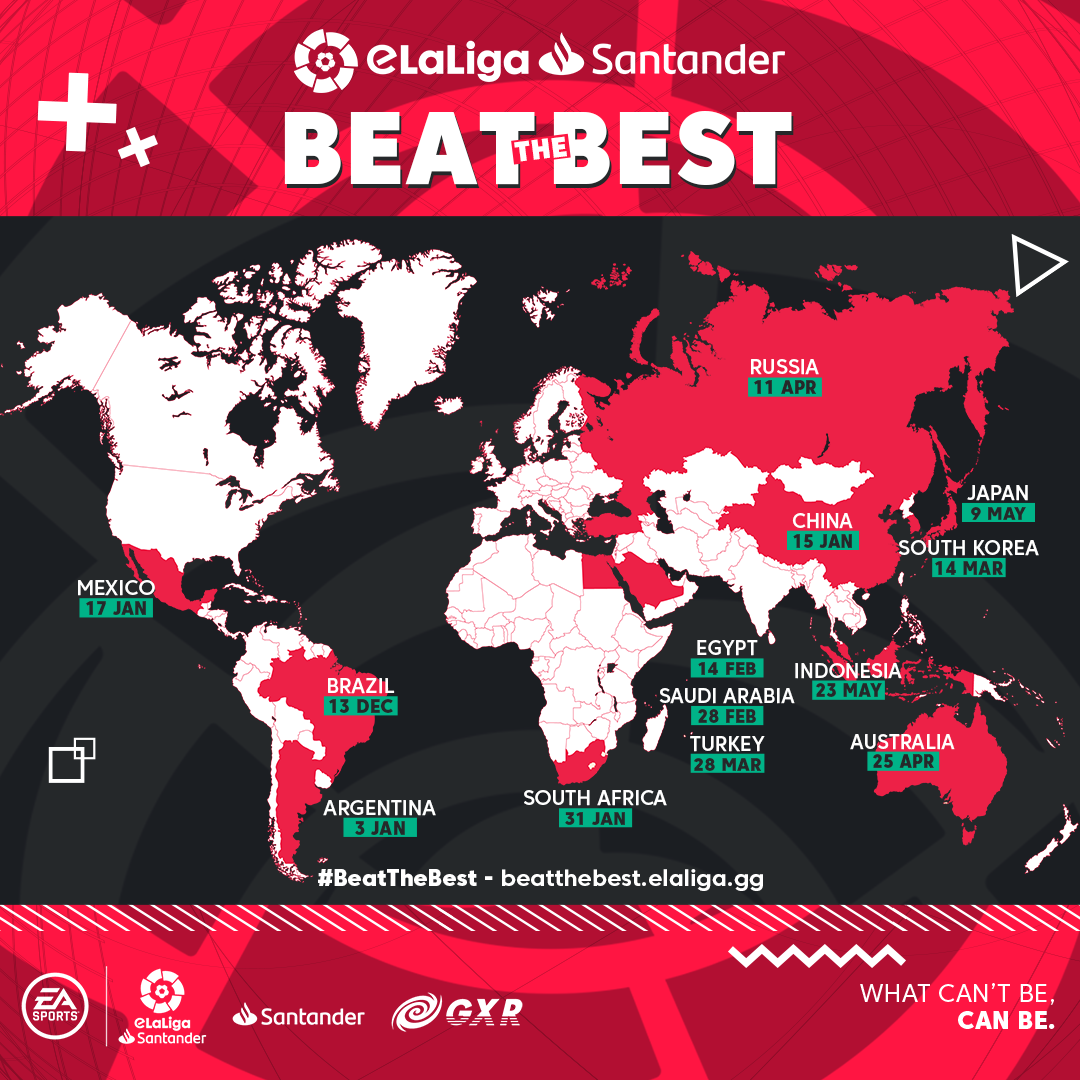 eLaLiga has announced the tournaments that will be part of their international project for the 2021/22 season. Thirteen online competitions in countries around the world, under the title “Beat the Best”, and two Challenges in China and the United States, will spearhead a strategy to continue growth of the eLaLiga brand outside of Spain.

South Africa becomes the first African country to host the Beat the Best tournament, which will take place between 31 January and 3 February. The winner will meet Meta Mike in a final to become the best amateur player of the country.

Beat the Best and Challenges

These tournaments started in December 2021 and will take place until May 2022. They will feature amateur players fighting it out to earn the top spot and earn the chance to play against an influencer from their own country. All the related details are available on http://beatthebest.elaliga.gg.

This format follows the lead of the 20/21 eLaLiga Fan Cup, which attracted 21,000 registered players and generated 3 million impressions on social media, the first step in the internationalization strategy developed by eLaLiga.

Says Alfredo Bermejo, director of digital strategy at LaLiga:“The eLaLiga Fan Cup was the first project to take the good work developed at national level beyond our borders. Although we had to make changes to the project due to the pandemic, we were able to complete the tournaments in all proposed countries and lay the foundations of our international strategy, which will this year continue with two very ambitious projects: ‘Beat the Best’ and ‘Challenges’ in China and the United States.”

These events will feature some of the best amateur players, celebrities, and influencers from both countries, facing off in an exhibition tournament that seeks to take the international brand of eLaLiga to a new level.

As in other seasons, more and more brands understand the potential of esports and in this edition, Banco Santander and Galaxy Racer will be the official sponsors of the “Beat the Best” competition.

eLaLiga Santander, consolidated with its fifth season in Spain

The fifth regular season of eLaLiga Santander will begin in Spain by the end of this month, heralding the start of three months of full emotion.

At the beginning of the season, the clubs will be divided into two groups meeting weekly to compete in person. The final ranking of the regular season will be determined by the 180 two-legged matches between LaLiga Santander clubs. In April, and following a break for the eLaLiga Santander Cup, the regular season will resume until May. The 16 best-ranked clubs, eight from each group, will then compete in the Grand Final of eLaLiga Santander 2021/22, after which one club will be named season champion. A prize pool of €250,000 will be shared among the 32 top finishers, with the champion taking home €60,000.

AppDate: Capitec puts the QR into transactions
Enter the world of esports