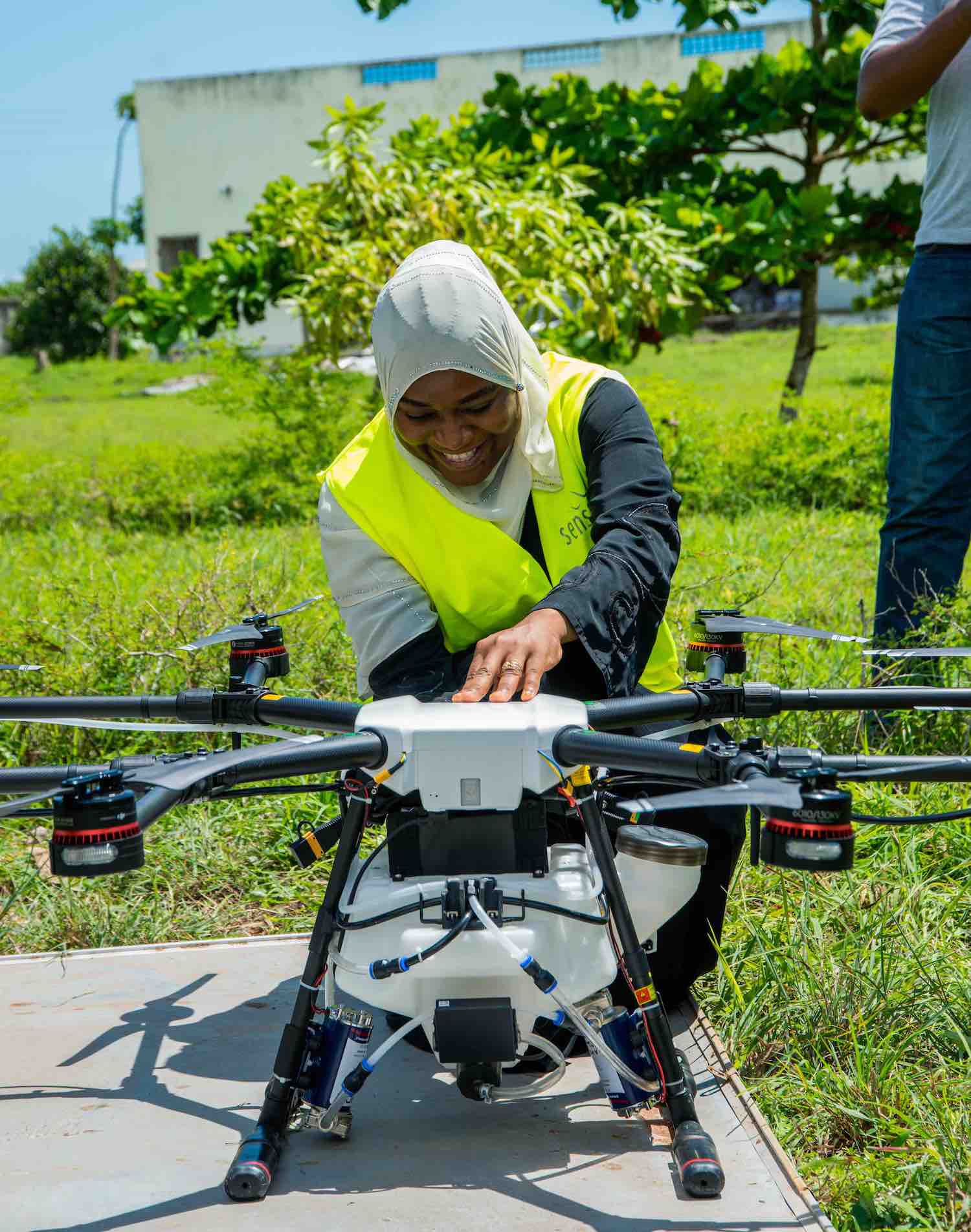 DJI, the global leader in civilian drones and aerial imaging technology, and a team of entomologists in the field of malaria elimination are working together to develop a revolutionary technique to fight the disease. By combining the research team’s expertise and DJI’s drone technology, a new way to fight the potentially deadly disease has been created. For the first time, there is a real chance to make a breakthrough in malaria elimination with the help of spray drones.

DJI joined a team of entomologists in Zanzibar to conduct a pilot project using a modified DJI MG1-S Agras drone which sprayed mosquito-infested rice fields with a unique non-toxic and biodegradable silicone-based liquid (Aquatain AMF).  The liquid was spread across stagnant water to create a very thin film that prevents pupae and larvae from breathing at the surface, causing them to drown and die.

“We are proud to be pioneers in this field along with scientific experts using our spray drones against malaria in Africa, and we have great hopes that this approach will significantly contribute towards defeating this fatal disease in affected regions around the world”, said Dr. Barbara Stelzner, Director of Marketing and Corporate Communication at DJI Europe. “Reducing the cases of new malaria infections will not only put an end to all the suffering of people, but it will also contribute to generate larger harvests, and provide new economical perspectives in Africa.”

By flying drones that spray biological insecticides in rice fields, the team of experts aim to demonstrate that the mosquito population can be significantly reduced. They will sample the larvae and emerging mosquito population before, during and after spraying to determine the possible impact of this approach in large rice irrigation schemes that are found throughout Africa.

“This experience has been made possible thanks to a customised DJI Agras MG1-S spray drone, enabling the deployment of the Aquatain liquid over rice paddies”, says Dr. Bart Knols, the scientist behind the project, who dedicates his life to research and fighting malaria. “The use of spray drones proves to be essential in efficiently treating large rice fields, because spraying by hand is very time consuming and using a helicopter is too expensive and simply not realistic.”

After the trial, the scientific team intends to publish the findings in a scientific journal and communicate further on the results.

Says Professor Wolfgang Richard Mukabana from the University of Nairobi: “This pilot project is the first attempt to fight malaria with spray drones on such a large scale. If the results of these tests are as good as expected, this could give a tremendous boost for winning the fight against malaria,”

The elimination of malaria in Zanzibar is the public health priority of the Zanzibar Malaria Elimination Program (ZAMEP), which welcomed this innovative spray drone technology as a promising tool to eradicate the disease.

Thanks to the support of Tanzania Flying Labs, a local robotics organisation and its branch located at the State University of Zanzibar, the project will contribute towards economic development by empowering local and regional drone pilots through flight training, data acquisition and business planning.

To read out more about DJI spray drone solutions for Agriculture, click here

The 5 big trends to expect in social media in 2020