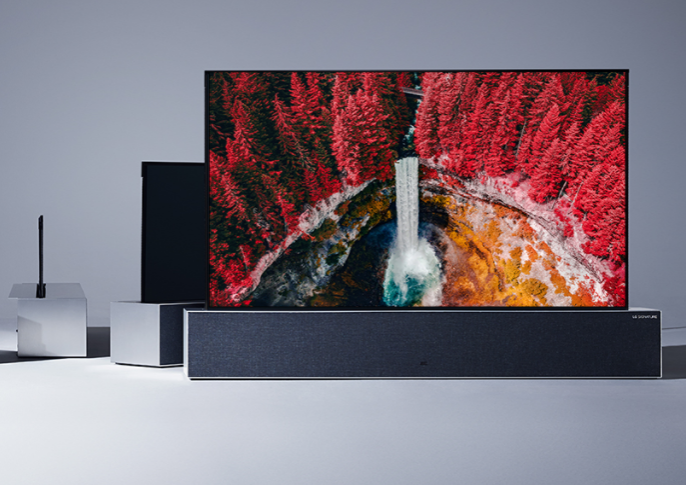 LG Electronics (LG) says it is defining the next generation of television at CES 2019 in Las Vegas with the introduction of the world’s first rollable OLED TV. The form factor of the LG Signature OLED TV R (model 65R9), made possible by the company’s industry-leading OLED technology. gives home TV viewers infinite possibilities in designing their viewing space.

Since the start of the modern era, television screen sizes have steadily increased as resolution improved, and consumers demanded a more immersive viewing experience. The trade-off came in the form of a large, black rectangle that dominated the room when the TV was not in use. Even more advanced projection TVs have never been able to deliver the contrast or the deep blacks that consumers demanded. In an effort to make large TVs less conspicuous, manufacturers have been racing to create even slimmer screens, focusing on designs that were as aesthetically pleasing.

With the introduction of the original “Wallpaper TV”, the LG Signature OLED TV W at CES 2017, says LG, it stripped away the traditional concept of a TV, focusing on the simplicity of the screen. Now LG has created a TV with a display that uses screen technology that allows the screen to roll up and roll back out when needed. The “R” in the new LG Signature OLED TV R “is about creating a revolution in home entertainment and redefining space through its ability to rise and roll-up at the touch of a button”.

LG’s rollable OLED TV is intended to free users from the limitations of the wall and allowing them to curate their own personal space. Using the flexibility of an OLED panel made of organic materials, the R can transform itself to offer three different viewing options – Full View, Line View and Zero View.

Click here to read more about the three modes of the LG Signature OLED TV R.

Previous Page1 of 2Next Page
Related Topics:CES 2019featuredLG
Up Next