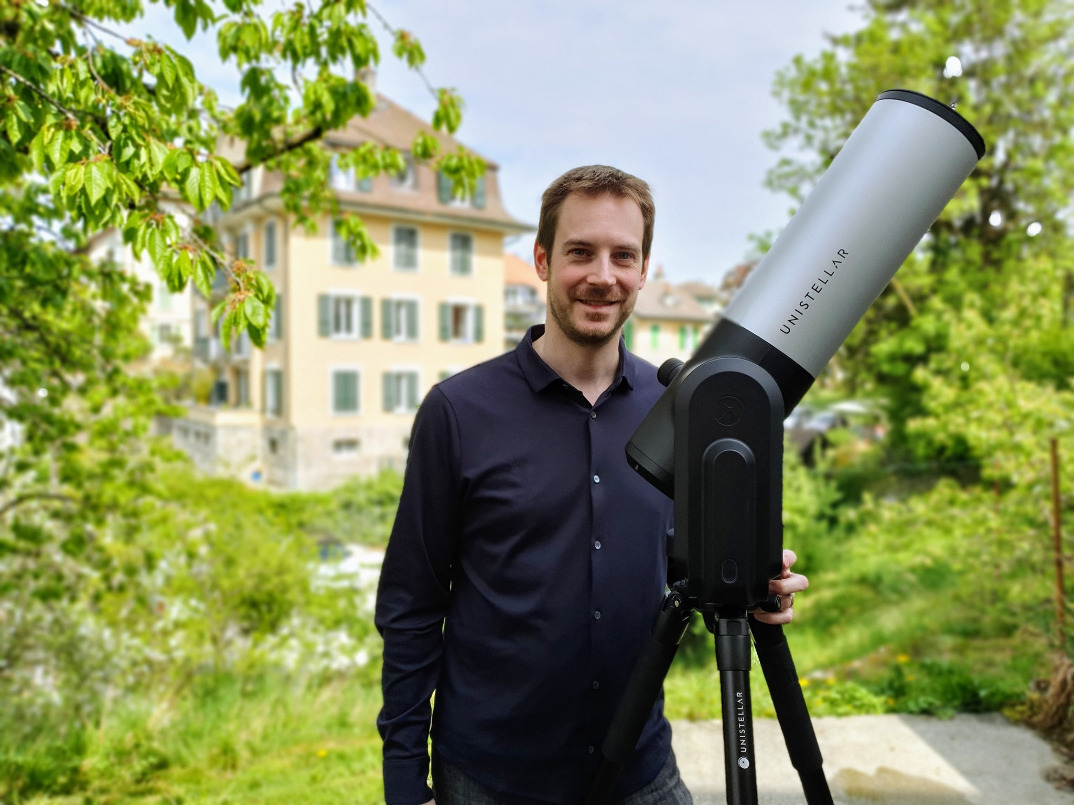 Citizen science pioneers recently made two contributions to a better knowledge of outer space. Backyard astronomers of the SETI Institute and Unistellar network conducted in April citizen science observations, and their discoveries will improve our understanding of asteroids and exoplanets. Thanks to their work, we know precisely the location of the main-belt asteroid 2000 UD52 and have confirmed an exoplanet transit of Qatar-1b.

Detecting an Asteroid Occulting a Star

After receiving an alert from SETI Institute scientists, on the night of April 9, Morand, a partner in a French strategy consulting firm, seized the opportunity to become an early pioneer in citizen science. He quickly set up his eVscope in his backyard in Western France.
A few minutes later, he succeeded in detecting an occultation by main-belt asteroid 2000 UD52, which occulted a star that was visible with his eVscope. This observation provides new insights about this celestial object, including an accurate estimate of its location.

Here is how he described his experience: “The occultation was very brief, 0.3s (the predicted maximum was 0.8s), therefore particularly difficult considering the small size of the asteroid (approximately 6.6 km) and the width of its centrality band. Having observers near and into the centrality band  allowed  us to better determine the position of the asteroid, and therefore refine its orbit! What a feeling!”

Detecting an Exoplanet Transiting over its Star

The Citizen Science team is also monitoring transiting events involving Jupiter-size exoplanets. On the night of April 23, Julien, a consulting manager in a Swiss public office, received an alert and tried to detect the Qatar-1b gas giant exoplanet transiting its star. Again, his willingness to contribute to cutting-edge science was rewarded with the resulting light curve proving that a detection was achieved.

“It takes me back to my childhood, the day I learned about the discovery of the first exoplanet,” said Julien. “I was so excited, and never could I have imagined that it will one day be possible for me to detect an exoplanet myself!”

Figure 1 Light curve of Qatar-1 b exoplanet detected on April 23, 2020, with a Unistellar eVscope

Both results have been submitted and are now stored on scientific data repositories so that astronomers around the world can access them. Euraster, the European Asteroidal Occultations network, published the positive detection of 2000 UD52 on its website. Unistellar network’s detections of exoplanet transits have been published by the American Association of Variable Star Observers (AAVSO) in partnership with the Exoplanet Watch program.


A New Era in Citizen Science

These two positive detections mark the beginning of a new era in amateur astronomy, where a network of backyard observers can contribute to real science, dedicating their time and passion to new discoveries.

“Enabled by the most revolutionary innovation in amateur astronomy to come along in decades, we are literally crowd-sourcing scientific discovery and cutting-edge astronomy,” said Bill Diamond, CEO of the SETI Institute.  “The power of citizen science in astronomical observations made possible by the Unistellar eVscope has already demonstrated breakthrough results – and we’re only just getting started.  As more users join our science team, the future holds unimaginable possibilities.”

The SETI Institute and Unistellar are working together to increase the network’s potential for scientific studies and new discoveries.