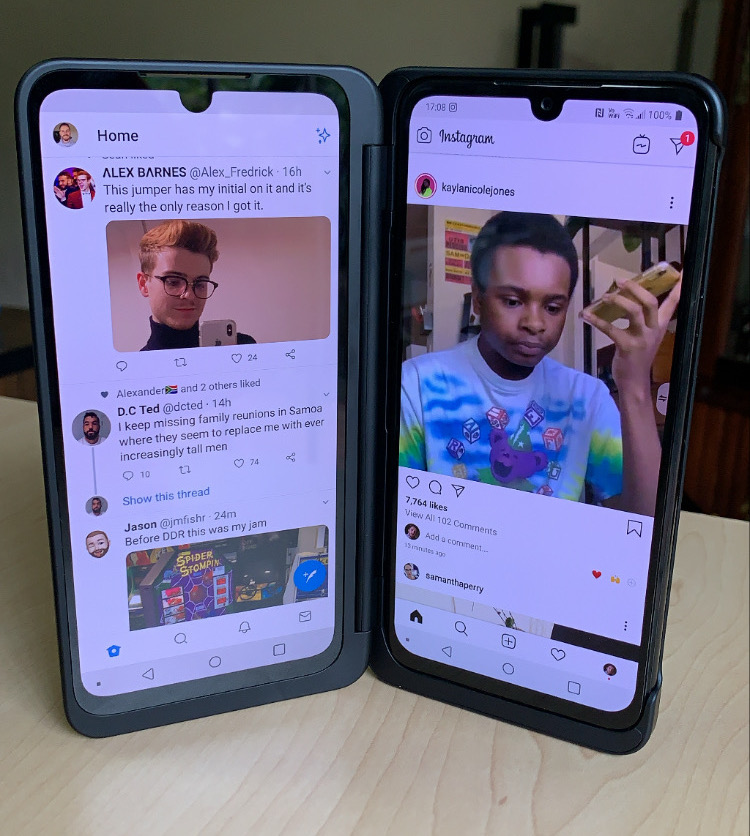 With many in the market ready to get their hands on an affordable foldable, LG’s G8X ThinQ Dual Screen provides an excellent convertible compromise between a great Android phone and foldable device.

While the device folds open and closed like the Samsung Galaxy Fold and Huawei Mate X, it does not feature a folding screen. Instead, the G8X clips into the Dual Screen case to create a neat dual screen phone that can run two apps simultaneously in full-screen mode.

The device opens like a book and features a small front screen when closed, to check the time and to read notifications. It extends the 6.4” display with another 6.4” display to give users a second screen on which to operate.

It was extremely useful for multi-tasking. We ran Instagram with Twitter, Gmail with Google Calendar, and Facebook Messenger with WhatsApp, all thanks to the dual screen.

The dual screen becomes especially useful with the built-in apps from LG, which have had a lot of thought put into them. For example, when one opens the camera with the dual screen attached, it makes the second a full-screen preview of the most recent photo taken.

It also becomes a gaming device with the LG Game Pad. It features a fully kitted out virtual gamepad on one screen, while the other displays games like Asphalt 9 and Fortnite. This enables players to get into the game without having to touch the display where the game is being shown.

While remaining in camera mode, the case also folds back on itself to enable selfie mode, which can be seen from both screens. This allows users on both sides of the phone to decide how photos look and how they should be taken, during the moment.

While the Dual Screen case is great, it’s an option of the device and thankfully so. The case makes the device quite thick, putting it in the same league as those who buy ultra-thick phone cases. It makes the phone resemble a Nintendo DS, and its form factor is likely to turn heads. While the Dual Screen case features the word “case” in the name, we don’t think it will be drop-proof.

That said, the LG G8X ThinQ is an excellent device on its own. It features water resistance, space for an SD card, wireless charging, excellent battery life, and – wait for it – a 3.5mm headphone jack.

Out of the box, it features the device, a power brick, a USB Type-C cable and earphones. A nice addition was the soft-shell case, which comes at no extra cost.

The camera itself is really great to work with. It features a 12MP standard lens with a 13MP ultra-wide angle lens. These pair up to create some of the best-looking photography on the market, especially when looking at the sharpness of the photos taken.

Video recording is also impressive. They record at a maximum of 2160p, with 24-bit 192kHz audio. LG has put a very impressive microphone set-up in the G8X to enable not only high-quality recording, but also to pick up the softest of soft sounds while recording. This is why they have an ASMR (autonomous sensory meridian response) mode, which enables users to create ASMR content that can be played back later. ASMR content is audio that’s supposed to produce a tingling sensation that usually begins on the nape and moves down one’s back.

In terms of performance, it uses the Qualcomm 855, which is a 7nm chip, and an Adreno 640. It plays graphically intensive games with virtually no frame drops, and runs multiple apps on its dual screens without a problem.

One of the best points about this flagship is the price. The device with the dual-screen case is pretty affordable for devices in its class, and costs between R15000 and R16000, depending on where you buy it. This makes it, by far, one of the most affordable devices of its form factor on the market.

Fintech will focus on bitcoin, stokvels, SMEs, in 2020