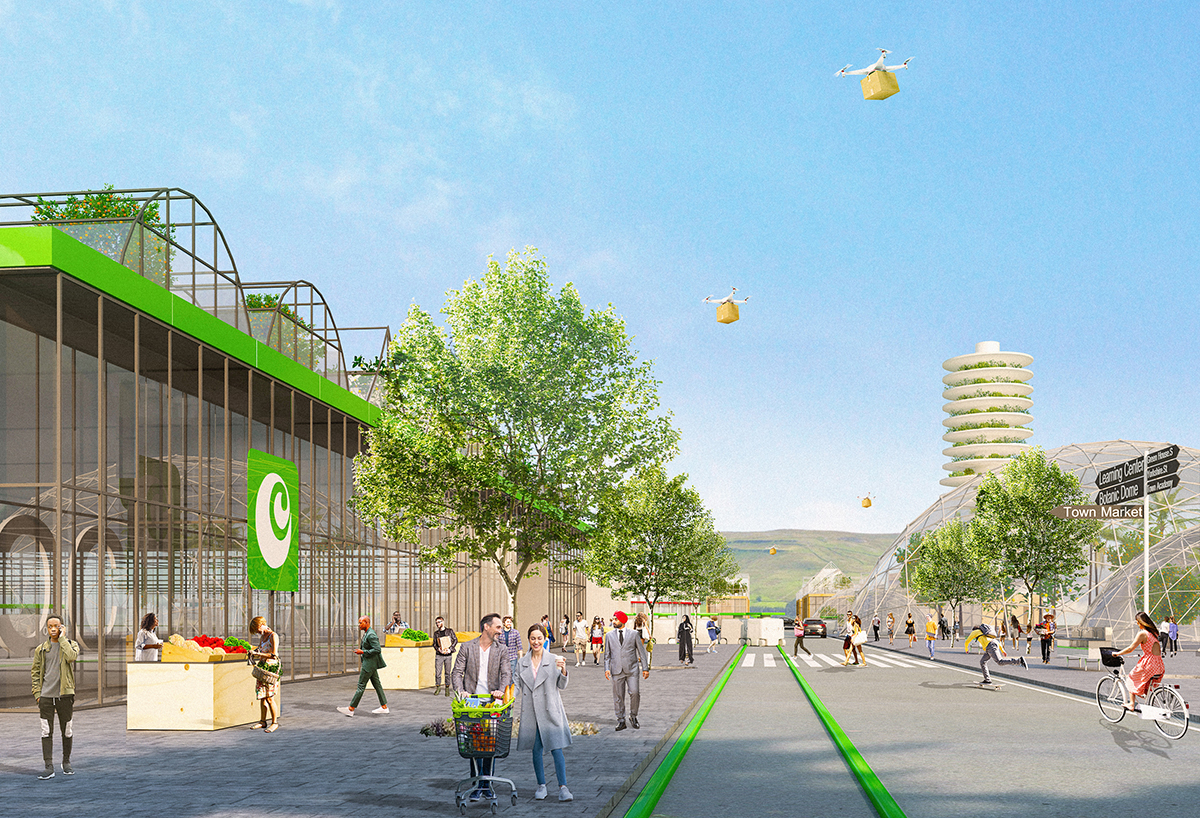 Sprawling and futuristic corporate campuses have become a norm from Silicon Valley to Shenzen, but the people working there still have to commute back to their very ordinary homes at the end of the working day.

However, it doesn’t take too much of a stretch of the imagination for these corporations to expand their business infrastructure into entire lifestyles for their workers.

That is the concept behind a visionary exercise undertaken by mortgage experts at Bankrate UK, who have taken inspiration from the dismal company towns of the industrial revolution, and created futuristic visions of “what life could look like if well-known companies once again created purpose-built houses and towns for their employees”.

“The last 12 months have seen a seismic shift in how and where we work, with many companies adapting and switching to remote ways of working,” says Bankrate’s content editor, Nisha Vaidya. “But if this new way of operating is here to stay, how could companies innovate to ensure the best work-life balance for those employees unable to do their job from home?”

The starting point is to pose a simple question, like: “Imagine Tesla as a town?”

Bankrate has proposed fascinating possibilities for a range of companies, from Ocado and its robot-run factories to IKEA’s simple, straightforward approach.

These are the most fascinating visions, as spelled out by Bankrate:

With their robot-run factories and ambitious environmental goals, a town created by the world’s first online supermarket Ocado would be the perfect combination of eco-friendliness and futuristic thinking.

Inspired by their ground-breaking automated warehouses, the town would feature an extensive grid system, allowing for all deliveries to be made by robot postal workers and autonomous delivery drones.

At the heart of the town, large eco domes would house exotic plants, fruits and vegetables. With unlimited access, employees and their families would be encouraged to only farm and consume the exact amount they required. Supporting the business’s zero-waste initiative, any additional produce grown would be donated to local food banks.

The addition of vertical farms would allow year-round crop development, providing a place to grow large varieties of produce onsite in the UK.

The Ocado Technology Academy would provide both staff and their families with the opportunity for further learning and development, whilst allowing Ocado to nurture the next generation of big tech thinkers.

Employees’ homes would be environmentally low impact and built from a mixture of recycled waste and bamboo. Plants grown on the roofs would help to regulate the temperature and produce oxygen, whilst large windows would reduce the need for internal lights, in turn lowering electricity usage.

Eco-friendly, attractive, and extremely functional, the town would be 100% electric and powered by solar roof tiles and geothermal heat and wind.

Elon’s own Boring Company tunnels would connect all areas of the town, allowing residents to speed away at up to 120mph on autonomous sledges. The latest Gigafactory would stand in the centre of the town, providing easily walkable access to the thousands of employees living onsite.

Known for self-promotion, an advertisement for one of Elon Musk’s latest ventures, Tesla Tequila, would sit proudly alongside an electronic sign tracking the town’s energy usage. A SpaceX launch facility would provide additional opportunities for advancing their space exploration programme.

Residential housing would not only provide incentives to new employees, but would also help to alleviate local housing market pressures and associated rising rent costs.

All homes would come fitted with the most up-to-date Tesla technology including supercharger stations, solar roof panels and Powerwalls. Living walls would blend futuristic design and nature, ensuring each home benefits from purified air, ambient temperatures and noise reduction.

With female empowerment at the heart of the company’s ethos and inspired by the brand’s roots in Notting Hill, a Sweaty Betty company town would be a riot of bright colours, with wellbeing at its core.

Set around a man-made lake and sandy beach, the town centre would have a relaxed vibe where employees and their families could live, work, and relax in harmony. An onsite creche would provide stress-free childcare, delivering a better work-life balance for all.

As expected, fitness would be evident in all aspects of town living, with unlimited access to classes and activities, while cycle routes would replace main roads throughout, allowing for a safe pedestrianised town where staying active is made easy.

As a nod to founder Tamara Hill-Norton’s motto; “Life would be boring if it wasn’t a mix of green juice and cocktails”, a beach-side juice bar would provide nutritious smoothies and snacks by day, before transforming into a cocktail bar after hours, allowing residents to go from yoga on the beach at sunset to catching up with friends over a cocktail at night.

Residents would live in a mixture of apartments and townhouses, all designed for modern day living. Floor to ceiling windows would flood the homes with natural light, while an abundance of plants and greenery would ensure the essence of outdoor living is continued indoors.

Simple, straightforward, and down-to-earth, a town designed by IKEA would be firmly rooted in the company’s Smålandic heritage, with a strong focus on community and togetherness.

Surrounded by woodland, the town’s centre would sit around a large open square, with an abundance of amenities including a gym, activity centre and a Småland creche, providing free childcare for all residents.

Inspired by their most-sold piece of furniture, the Billy Bookshop would sit proudly alongside their subsidised coffee shop ‘FIKA’ where residents would be encouraged to take time out of their days to enjoy a warm drink and something to eat alongside their friends or colleagues.

The BoKlok employee homes would embody true Scandinavian design, featuring high ceilings and large windows, creating bright and airy family homes. In line with their TACK retirement plan, long serving co-workers would be encouraged to continue living within the community long after retirement.

Bankrate’s vision is not one only for the privileged employee of leading-edge companies. If such towns could be shown to make for viable communities, they could become the inspiration for how villages and cities are developed in the future. And it shows that science fiction visions of the future do not have to be of dystopias.

These images and descriptions first appeared at: https://www.bankrate.com/uk/mortgages/21st-century-company-towns