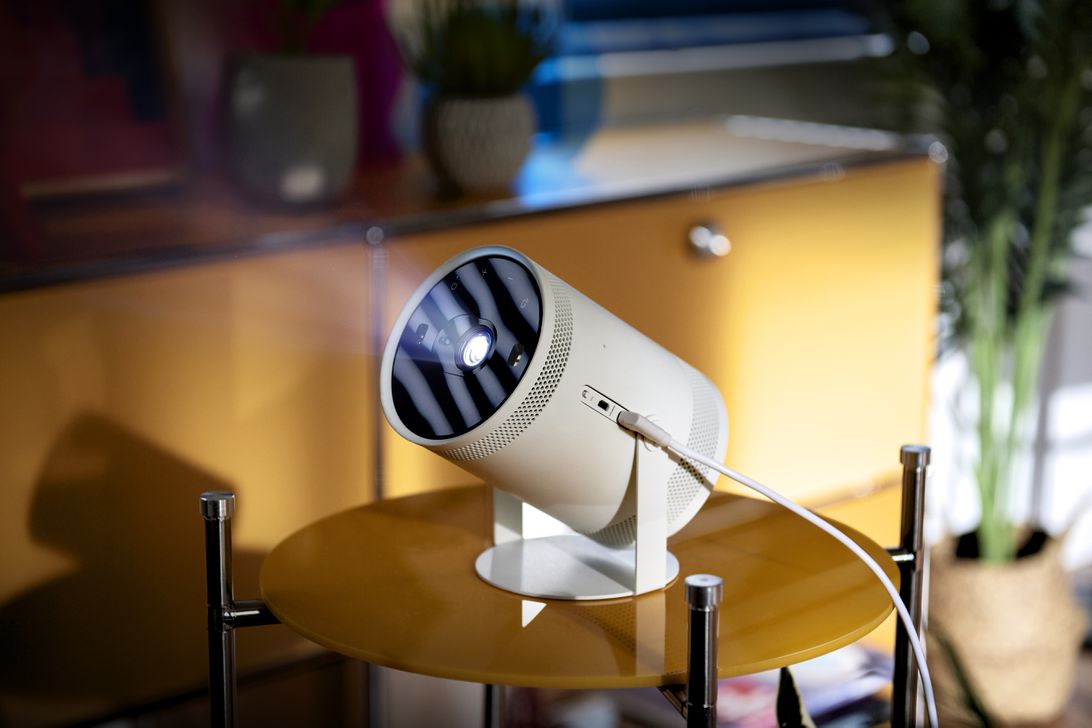 The Freestyle is a portable entertainment device that brings a new level of flexibility to the projector category. It combines the projector with a smart speaker and ambient lighting in a lightweight format, weighing just 830 grams, and mounted on a cradle that allows vertical rotation of up to 180 degrees. That means users can change any space into a screen, from tables and floors to walls and ceilings.

“The Freestyle is an innovative projector geared towards ultimate versatility and flexibility to meet the consumers’ changing lifestyles,” said Samsung in its launch announcement last week. “Without the limitation in space and form factor, it is a fun and versatile device that can be used in any way consumers prefer.”

Translated, this means it can be used as a streaming device for music, movies and any other content one chooses to project onto any surface, anywhere. The most amazing feature is, of course, the screen size it makes possible, offering up to a 100” screen. That’s double the size of the typical large flat-screen TV that is already becoming standard in many homes. That it itself may not be amazing, but considering that one can mirror streaming movies from a smartphone, in that size, onto any wall in a low-lit environment, it is in effect like carrying a cinema around with you.

The Freestyle promises full auto keystone, meaning the software in the projector allows it to self-adjust the lens, and auto levelling, which automatically adjusts the screen to any surface at any angle, providing a proportional image.

With its own speakers, using what Samsung describes as “a dual passive radiator”, it offers a clean and deeper bass without distortion, while 360-degree sound radiation allows a cinema-quality sound experience. Samsung says that applies no matter where you are using it, but the truth is it won’t work as well in some environments. However, it can be paired with Bluetooth speakers for the best sound one is able to generate from other equipment.

It is powered via a USB-C cable and fast-charging plug, but can also be used with external batteries or power banks that support USB-PD and 50W/20V output or above. Movies in a tent while camping, anyone? People have done stranger things for entertainment.

It’s a great party device too, providing mood lighting, thanks to an ambient mode, translucent lens cap and the ability of the smart speaker to analyse the music to pair visual effects that can be projected on the wall or floor. Oh yes, the cradle can be mounted on a ceiling to project the lighting downward.

We thought it appropriate to try this effect with Cyndi Lauper’s True Colours, and were transported right back to the 1980s and its experiments with synthesised sound and light.

The most impressive feature of all is that it contains its own Internet browser and apps environment, allowing one to connect directly to the Internet from the projector, and singing in to Netflix or playing a YouTube video directly from the device,

Most home projectors are geared to being placed in a fixed location, for use on the ideal wall or surface one has chosen for the purpose. Alternatively, they are used with computers or laptops for presentations and the like. Versatility has rarely been a selling point, and the Freestyle reinvents the category. In future, most makers of projectors will need to compete on both portability and flexibility of use.

Its compatibility with devices from numerous brands is also a real shift in thinking from large electronics manufacturers who tend to force users into their own ecosystems.

The tablet that goes to work
Chat gets a super-app